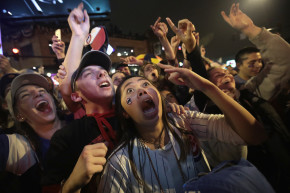 32,000 People Tweeted @Cubs In The Minute After They Won World Series
By Brian Patrick Byrne

32,000 People Tweeted @Cubs In The Minute After They Won World Series

The Chicago Cubs historic win was all over Twitter, with the World Series dominating the top trending news

Cubs fans watch their team during the final game of the World Series. — Getty Images
By Brian Patrick Byrne and Jacob Steinblatt
Nov 03, 2016 at 6:50 AM ET

More than 32,000 tweets mentioned the Chicago Cubs in the minute following their World Series win on Thursday.

The Cubs overcame a 108-year drought—the longest in the history of professional baseball—by winning the World Series with a final score of 4-3 on Thursday morning.

The final moment came at exactly 12:47 a.m. EST, when, after a 17-minute rain delay, and then entering extra innings, the Cubs finally beat the Cleveland Indians 8-7. During the next minute, 32,476 tweets mentioned the Cubs’ Twitter handle, @Cubs.

Unsurprisingly, the game dominated social media, with 847,527 tweets mentioning the @Cubs account between when it kicked off at 8:00 p.m. EST, until around 3:30 a.m. The vast majority of tweets congratulated the Cubs on their win, even some Indians fans applauded Chicago’s long-suffering baseball team.

The team and its players dominated Twitter’s top trends for several hours after the game ended. Eight of the platform’s top 10 trending topics in the U.S. specifically referred to the Cubs, including #Cubs, #Chicago, #Cubbies, and Carl Edwards Jr., the 25-year-old Cubs pitcher who recorded the first two outs in game seven’s 10th inning.

It happened: @Cubs win World Series. That's change even this South Sider can believe in. Want to come to the White House before I leave?

.@HillaryClinton, who grew up a @Cubs fan, watches them win the #WorldSeries. She kept her motorcade in Tempe so she could watch the ending. pic.twitter.com/Gt7CL26BtX

.@Cubs I have not cried at a baseball game since Buckner. This one feels better.

Far fewer tweets mentioned the Cleveland Indians, who lost game seven on their home turf. During the time period where the @Cubs was mentioned in almost 850,000 tweets, some 179,868 mentioned the Indians’ Twitter handle, @Indians. Most of those tweets, 3,903 total mentions, came a couple of minutes after the Indians lost.

What a game! Congrats @Cubs fans. If anyone was gonna beat us.. I'm glad it was you guys.

Also.. Thank you, @Indians for an amazing season!

Pretty proud to be an @Indians tonight no matter the outcome, I would go to war with this team any day! Also congrats @Cubs well deserved!

Fans watching from outside the U.S. appeared more appreciative of the Indians’ efforts at Cleveland’s Progressive Field, however, as #Indians was the third-biggest trend on Twitter’s worldwide trends in the hours after the World Series came to an end, behind #WorldSeries, and of course, “Cubs.”