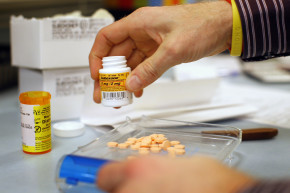 The Lifesaving Addiction Treatment Too Few Doctors Are Prescribing

The United States is in the midst of an opioid epidemic, with more than 14,000 people dying from prescription opioids in 2014 alone. And yet, per a recent study, doctors with access to one of the most effective and safe medications used to treat dependence on such drugs aren’t using it nearly as often as they could be.

The study, published this fall in the Journal of the American Medical Association, shows that more than 20 percent of physicians licensed to prescribe buprenorphine, an opioid medication used to combat addiction, treated three or fewer patients, while less than 10 percent treated more than 75 patients. Under current U.S. law, such doctors are permitted to treat up to 30 patients simultaneously, while after one year, they can request to treat up to 100 patients.

Researchers gathered data from around 90 percent of prescriptions filled at retail pharmacies from January 2010 through December 2013 from the seven states with the highest number of physicians permitted to dole out buprenorphine-based medications like Subutex and Suboxone (California, Florida, Massachusetts, Michigan, New York, Pennsylvania, and Texas). They found 3,234 prescribers treating 245,016 patients that had a new prescription for buprenorphine. The researchers found that while many doctors were treating only a few patients, the median treatment time for these patients was also 53 days — a relatively brief time that is not likely to produce positive outcomes for many of those in treatment.

However, the study also found that 49 percent of prescribers worked with between four and 30 patients monthly, 20 percent had 31 to 75 patients, and just nine percent had more than 75 patients.

“Novice prescribers cite insufficient access to more-experienced prescribers and insufficient access to substance abuse counseling for patients as barriers to treating more patients,” Bradley Stein, the study’s senior author and a physician scientist at RAND, a nonprofit research organization, said in a statement. “These barriers might be addressed by programs providing mentoring and telephone consultation from more-experienced prescribers. Web-based or tele-counseling for patients also may be helpful in communities where patients have difficulty accessing training counselors.”

In addition, Lindsay LaSalle, a senior staff attorney at the Drug Policy Alliance, said that bureaucratic red tape as well as stigma surrounding medications such as buprenorphine and methadone also play a factor in physicians not prescribing up to their their limits. “When you have buprenorphine and methadone, which are highly regulated and overseen by the DEA [Drug Enforcement Administration], there is a specter of inappropriateness that is attached to those who need the medication and those who prescribe it,” she told Vocativ in a phone interview Wednesday. “Those who are well-intentioned get the waiver, but the overshadowing of the DEA and the bureaucratic red tape… means that they are not reaching capacity.”

Physicians prescribe buprenorphine to recovering opiate abusers in an effort to wean them off of their drug of choice. Typically, buprenorphine-based drugs such as Subutex and Suboxone are taken every day, and allow patients to function normally without succumbing to debilitating withdrawals. They are prescribed nowadays for a number of reasons: For one, buprenorphine is a safer option than methadone, which is considered the most addictive prescription opioid and is responsible for the most overdose deaths in the U.S. Buprenorphine also has a longer half-life than methadone and stays in one’s system longer, so patients don’t tend to suffer withdrawal if a dose is missed. But perhaps most importantly, buprenorphine is a partial opioid agonist, which means it doesn’t cause as much respiratory depression as methadone and therefore is safer to users.

Additionally, as LaSalle points out, Suboxone can actually be prescribed by physicians, whereas those receiving methadone maintenance treatment are required to enter a clinic to receive their medication, sometimes every day. “So, it makes sense that an addiction physician may, out of necessity, be more reliant on Suboxone to treat their patients,” she said. “Apart from a few limited circumstances, methadone can only be administered in clinic-based setting under the supervision of medical personnel.”

In order to address the issue and assist physicians currently permitted to prescribe buprenorphine, researchers suggest increasing both patient limits and the number of licensed doctors.