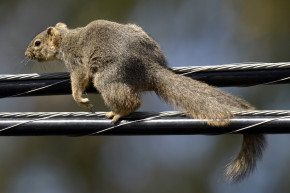 Hackers haven't actually disrupted any American's vote in 2016. But one squirrel with a death wish has.

Election Day is still days away, but one rodent has already managed to briefly hamper the American voting process.

A squirrel chewed through a power line in Troy, Ohio on Monday, cutting off power to the Miami County Courthouse, which oversees elections, as well as to an adjacent building.

“The power was out between the two buildings for a little over two hours,” Beverley Kendall, Director of the County Board of Elections, told Vocativ.

During that time, electronic machines worked on backup, but election officials asked early voters to either come back in a few hours or to use one of the paper ballot machines. Miami County offers both as an option.

Kendall said she wasn’t sure how many people opted to leave with the intent of coming back after power resumed. At least 300 people voted by paper ballot by midday Monday, according to local My Dayton Daily News.

It’s unclear if the squirrel survived.

Squirrel bites can cause hundreds of power outages in the U.S. each year. Cyber Squirrel 1, a website that tracks squirrel-prompted outages across the U.S. — the joke is that squirrels cause far more disruption to American infrastructure than any cyberattack — has found dozens of such instances this year alone.

Similarly, despite fears of vote hacking — and some poll respondents saying they so assume the voting process will be hacked that they may stay home on Nov. 8 — experts say that fears of hackers rigging the U.S. election are largely unfounded.