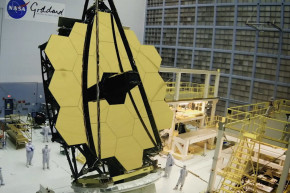 NASA has completed the James Webb Space Telescope, the successor to the Hubble Telescope. Hubble launched into orbit in 1990 and allowed scientists to observe the most distant stars and galaxies. Now, the JWST will be the largest telescope ever sent into space. It will orbit the Sun one million miles from Earth and stay operational for up to 10 years. The JWST is 100 times stronger than Hubble – and it will study the first galaxies born after the Big Bang. The JWST is set to launch from French Guiana in October 2018.