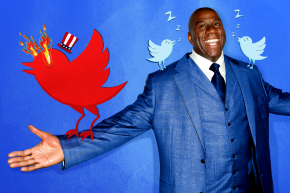 His sports commentary is nap-inducing, but off the court, the man has real opinions 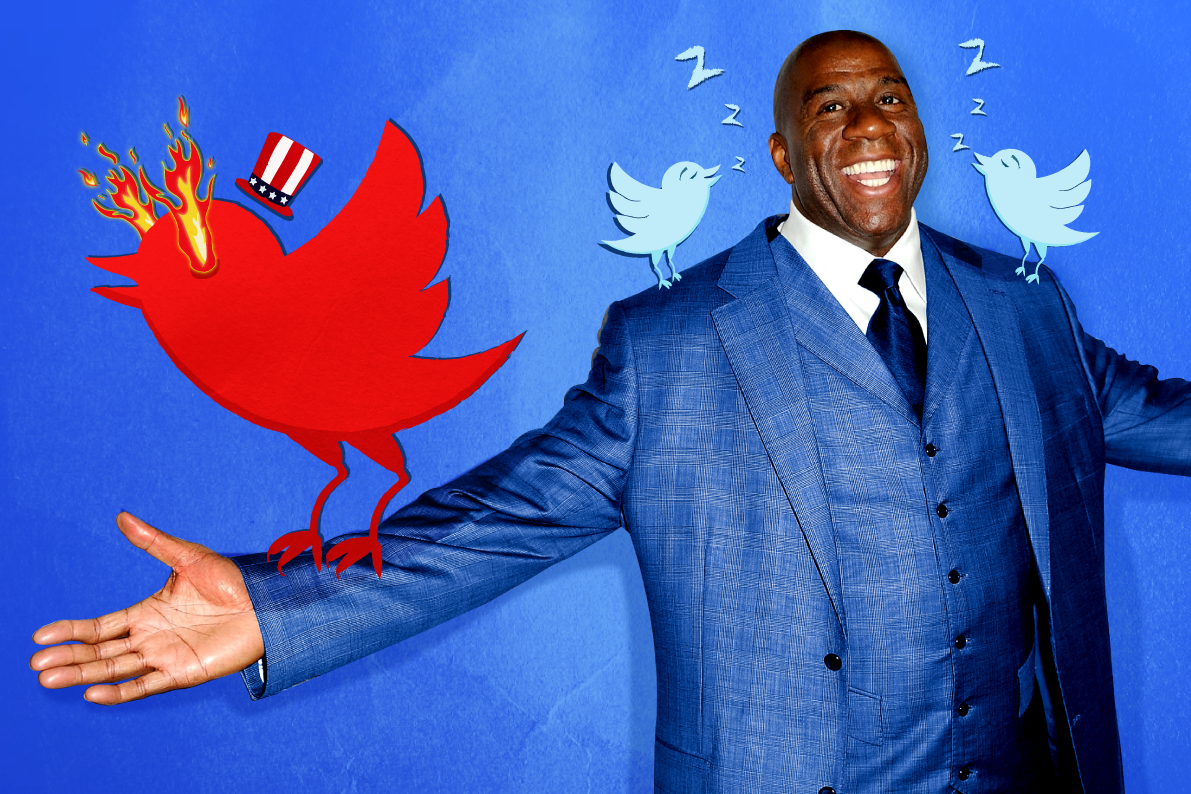 NBA Fans: LeBron James and Stephen Curry will have some competition for MVP this year from Russell Westbrook and Kawhi Leonard.

This tweet was not only wholly inoffensive but also eminently logical. Johnson had, after all, named the top four vote-getters in last year’s MVP voting. Still, the exclusionary take must have weighed on Johnson and so, 12 hours later, he chimed in again.

Kevin Durant is playing great for the Warriors and should be in the MVP conversation averaging 31pts, 10reb and 4ast.

Great. Now the fifth-place vote getter from last year was in the mix, too, but Johnson’s conscience still wasn’t clear.

And five more. That’s 16 contenders in total, like those asinine college football award preseason watch lists. (I hope everyone’s keeping an eye out for all 51 linebackers under consideration for the Butkus Award!) Keep in mind that, at the end of the season, the league will announce three All-NBA teams honoring the top 15 players, and this player pool exceeds that. Feel better, Magic?

This was but the most egregious example of Johnson’s inexhaustibly cheery, inextricably anodyne Twitter account. Earnest Earvin is re-writing the rules of grammar, inserting exclamation points into every sentiment; a simple declarative sentence with a period is the more sensational punctuation on his feed, one that calls attention to its gravity. (Even his bio touts, “The Official Twitter account of Earvin Magic Johnson!”)

In fact, a Vocativ statistical analysis found 4,406 tweets out of his 7,860 original compositions (excluding retweets) used exclamation points. That means a whopping 56 percent of his thoughts were worth crowing about at increased volume.

Perusing his feed is akin to conversing with a kindly uncle, only amplified to 3.23 million followers. His love for his wife is endearing; he tweeted 20 straight times in September with the hashtag, #EC25, for the Earvin-Cookie 25th anniversary. He has tweeted about her by name, Cookie, or Twitter handle, @cjbycookie, 357 times and documented, in extraordinary detail, their Italy vacation, harkening the image of a middle-aged social media user who doesn’t understand the importance of editing a slideshow rather than doing a full photo dump.

Some of his basketball insights lack any real insight. There is no better example than this gem from 2014:

The only way San Antonio or Miami don't win the championship is if neither team makes the finals.

The appropriate reply from a sarcastic user summed it up well: “just tried Google, couldn’t find any solid info on if you can win championship without making Finals.”

Or what about these two tweets, posted just 48 hours apart after divergent outcomes in the NBA Finals?

The reason the Cavs blew the Warriors out was because of their defense and physicality.

The Cavs problem is that they have too many players that play offense and very few that play defense.

Other commentary is just painfully mundane. Take Johnson’s tweet about his WNBA team’s victory, in which he attached a courtside pic like regular guy documenting a rare trip to a pro game.

That’s not to say Johnson hasn’t tweeted himself into trouble. He has enthusiastically endorsed that his Los Angeles Lakers—where he played all 13 seasons of his career and later held an ownership stake, which he sold in 2010—target just about every free agent of value. Because he remained listed in the staff directory as an honorary vice president, his tweets about pursuing certain players, nominally, could have been construed as tampering. After some in the league were irked by this commentary, Johnson ultimately requested his removal from the masthead.

He does, however, remain an investor in baseball’s Los Angeles Dodgers. He’s fond of addressing the club’s fans by opening a tweet with “Dodger Nation,” a phrase he’s used 355 times, or more than double his invocations of “Laker Nation,” at 164.

This Dodgers affiliation and his high-profile standing in the community mean Johnson’s Twitter mentions are regularly subjected to backlash from fans unable to watch games, owing to the exclusionary TV rights deal with Time Warner that leaves more than 50 percent percent blacked out. Fans often pepper him with questions like, “What channel will that be on?” When Johnson said everyone should go see the musical Hamilton, one fan wrote, “you know what “everyone should see”? The @Dodgers on TV! Vin Scully’s 67th and final year!”

Johnson is an in-demand corporate speaker—he exclaimed, “What an honor it is to be included as one of the ’10 Most Booked Corporate and Association Speakers of 2016!’”—and often includes photos of himself with CEOs or other audience members. He even shared his childhood pizza consumption habits.

I had so much fun speaking in front of the Domino's audience! It was very cool because as a young man, I grew up eating @dominos pizza!

Naturally, pizza prompted more TV moaning, with a fan saying, “I grew up watching the @Dodgers, but now I can’t! #GREED”

The real magic of Johnson’s account—pun, sadly, intended—is that he’s at his best when he’s not offering tepid sports takes but, instead, sharp civic and political commentary.

I am disgusted with what’s happening in our country. What does it take to stop the killing of black men?

After a series of racially charged shootings in early July—a pair of black men, Alton Sterling and Philando Castile, died after being shot by white police officers and, in retaliation, a black man killed five Dallas police officers—Johnson went on a 13-message tweet storm. Among the tweets were a call for unity among all:

To respond to injustice with violence is not the answer. We must unite and show the world that we are not divided regardless…

…of our differences in race, background or religion. We are all one community.

And a call to action in hopes of finding a solution:

…to start solving the issues with treatment of African-Americans in this country.

While many in the sporting realm are lambasted by followers to #StickToSports and not comment about anything outside their purported expertise, Magic ought to do the opposite.