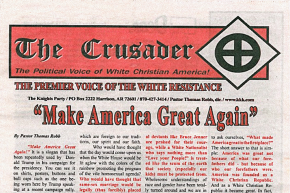 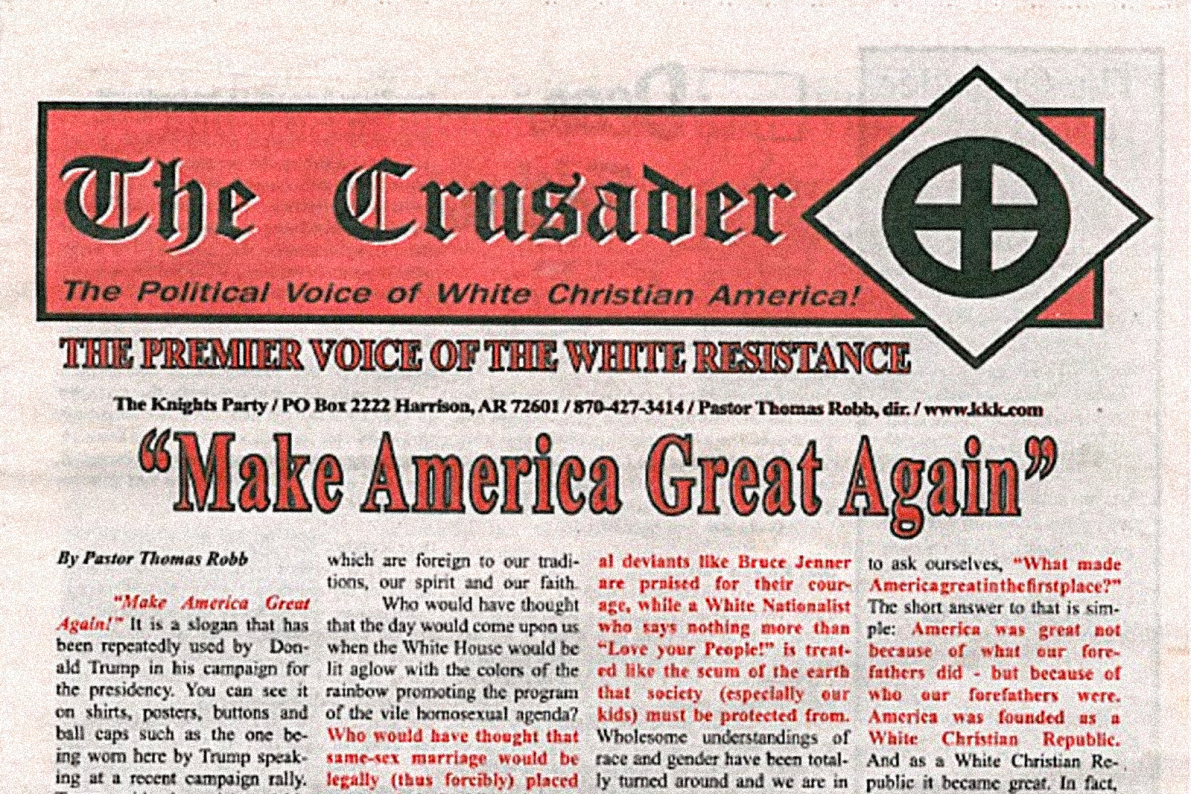 “Mr. Trump and the campaign denounces hate in any form. This publication is repulsive and their views do not represent the tens of millions of Americans who are uniting behind our campaign,” a Trump campaign spokesperson told Vocativ in an email.

In the fall edition of its quarterly newsletter, The Crusader, the Knights of the Ku Klux Klan — a faction of the Klan founded and made infamous by renowned racist and current Louisiana Senate candidate David Duke — made its case for a Trump presidency.

“While Trump wants to make America great again, we have to ask ourselves, ‘What made America great in the first place?’ The short answer to that is simple,” the endorsement’s author, Arkansas-based bigot Thomas Robb, wrote. “America was great not because of what our forefathers did — but because of who are forefathers were, America was founded as a White Christian Republic. And as a White Christian Republic it became great.”

More How Newspapers Came To Endorse Anyone But Trump

Trump has consistently landed that not-so-coveted white supremacist vote since early in his candidacy. In February, Duke used his radio show to encourage his followers to support Trump, noting that “voting against Donald Trump at this point, is really treason to your heritage.”

While Trump himself hasn’t explicitly welcomed the support, at times he’s been slow to distance himself from it. When he was asked on CNN’s “The Situation Room” to disavow Duke’s glowing endorsement, Trump feigned ignorance.

(It’s worth noting that this was either a lie or he’s forgetful: Trump ended a brief 2000 Reform Party bid for president, in part, by disparaging Duke, calling him “not the company I wish to keep.”)

The Knights of the Ku Klux Klan do not speak for all Klan groups — as Vocativ has previously reported, the modern-day Klan is made up of multiple factions in places across the country. In many cases, these different Klans don’t get along, bickering about things as petty as what uniforms to wear.

The leader of another Klan faction, Will Quigg, a Grand Dragon in a California branch of the Klan, told Vocativ in April that he was actually supporting Hillary Clinton, and even claimed his group had already donated about $20,000 to her campaign — a claim the Clinton campaign said was “completely false. We want no part of them or their money and vehemently reject their hateful agenda.”

In Trump’s case, it took him several days to reject the support of the Klan, and blamed his hesitancy to do so on not understanding Tapper’s question due to a faulty earpiece.

UPDATE: This post was updated after publication to include a statement from the Trump campaign.