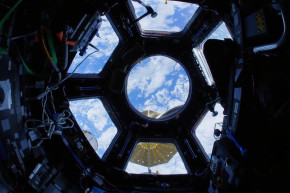 Tour The Space Station In Stunning 4K
By Andrew Caringi

NASA has released stunning video from inside the International Space Station. The cinematic tour of the ISS was filmed in 4K ultra-high definition through a fish-eye lens. It takes viewers through the narrow corridors of the space station, which is actually larger than a six-bedroom house. Three astronauts, two Russians and one American, are currently on board.