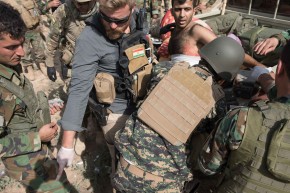 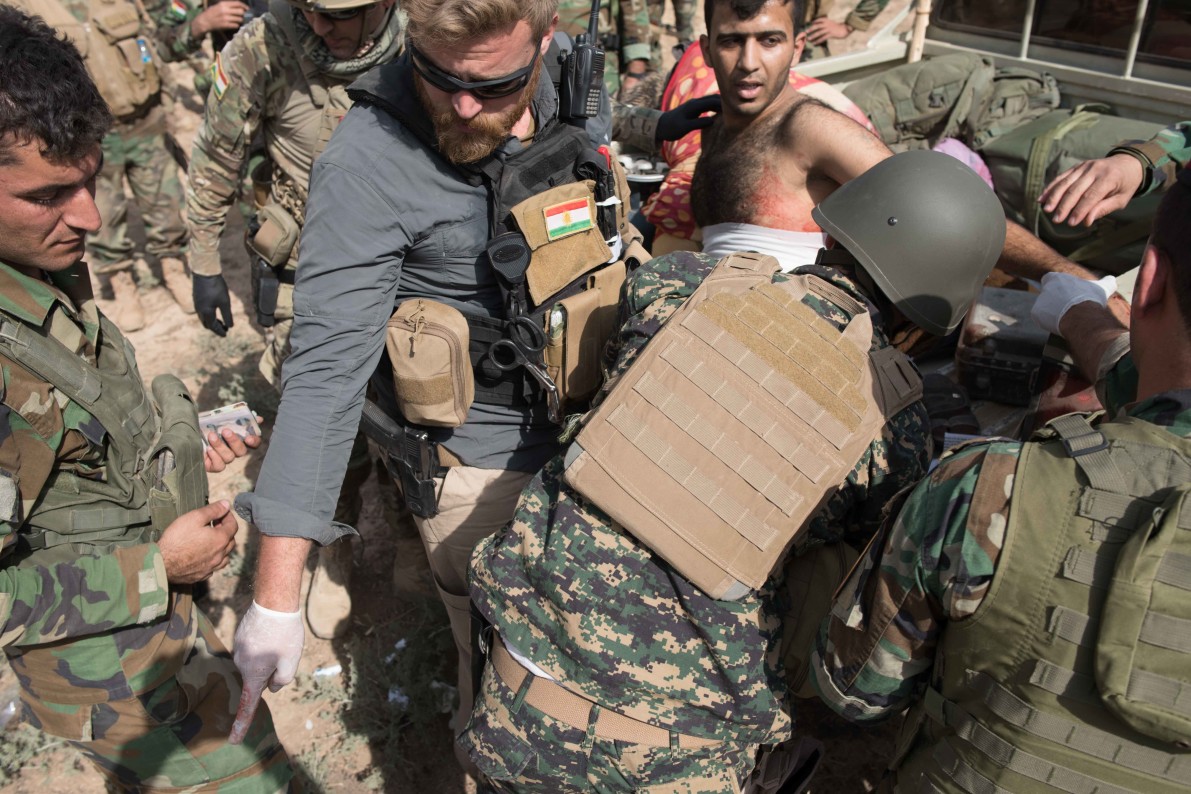 SHOKHOLI, Iraq – The Toyota Hilux slowed as it approached a military checkpoint at a bridge over a river in northern Iraq. Inside the truck, three Americans and their translator stared straight ahead as the Kurdish Peshmerga sentry peered at them.

Ahead was the front line where Kurdish forces have been holding fighters from Islamic State at bay for the past two-and-a-half years. In the back of the truck were a pile of kevlar vests, helmets, plastic bins and black duffel bags. The Americans, with their beards, tactical clothing and dark glasses, looked like characters from the Call of Duty video game franchise.

The Peshmerga fighter looked over them and their equipment quizzically. “Canadi?” he finally asked.

“Balay” – yes – the driver replied and drove through before the confused guard could ask more questions. He had mistaken them for Canadian special forces who operated in the area. As they clattered over the metal bridge, one of the Americans said with a sigh of relief: “We’re playing it kind of fast and loose here.”

That is to say, during one of the largest military operations in Iraq since the U.S.-led invasion in 2003, they were attempting to get onto the front line, and they were doing it without formal permissions. The battle to retake Mosul was underway and they wanted to be a part of it. Their goal: to set up a mobile medical clinic to treat wounded Peshmerga fighters.

Of all the parties in a confusing conflict that has pitched rival factions into an uneasy axis against the Islamic State, perhaps the strangest group of all has been the western volunteers. Hundreds have come, ranging from military veterans to ex-convicts, all hoping to help the Peshmerga fight ISIS. Most have returned home disappointed after learning that the Peshmerga are more eager to receive western military aid than to allow un-vetted foreigners the chance to take potshots and selfies from the front line.

None of the Americans knew each other back home. Pete Reed was a 27-year-old ski instructor and former Marine combat medic who saw action in Afghanistan. Jonathan Rieth, 39, was an Emergency Medical Technician from Syracuse, New York. From San Diego came Derek Coleman, a 27-year-old libertarian firearms enthusiast.

Reed arrived in Kurdistan last November dreaming of fighting in epic Iwo Jima-scale engagements. But he soon realized his skills would be put to better use training Peshmerga and offering his medical expertise. He met Coleman outside a shopping mall – he’d recognized a fellow volunteer from his combat boots, checkered shirt and cargo pants. Reith befriended them after flying out alone to offer the Peshmerga medical support.

Together they’d networked and hustled until they’d received enough donated medical supplies to run a mobile aid clinic. They traveled front lines glad-handing generals and offering free medical training. A breakthrough came when they received support and funding from a Slovakian organization called the Academy of Emergency Medicine, which allowed them to hire their own vehicles. In August this year they participated in their first offensive, setting up their clinic with the blessing of a Peshmerga general and treating his wounded men.

This offensive looked different though. It was larger and better organized than most Peshmerga operations. In the past, medical care was often an afterthought. Many fighters in this conflict have died from treatable injuries by bleeding out on the way to the hospital. This time though, there were at least 40 ambulances waiting in the rear, and even helicopters on standby to fly critical cases to the hospital. Most concerning for the American volunteers, they had not yet found a unit to embed with.

They hoped that by slipping into a convoy, they could push far enough forward to set up a medical clinic where no other primary care was available. “Winging it,” said Reed. “It’s how we’ve always done it. We’ve got the biggest balls in the room until someone tells us otherwise.”

That night they slept in an abandoned outpost on the front line, airstrikes and explosions rumbling until dawn. By sunrise Katusha rockets were screaming outwards towards ISIS positions, with tracer fire from ISIS machine guns coming back in. The offensive had begun.

The Americans drove out looking for where the Peshmerga had breached the line, excited and joking as they chose call signs for their radios. “Witness me!” someone said into his handset, quoting from the latest Mad Max movie.

As planned, they slipped into a convoy of journalists and Peshmerga. Most of the press corps stopped when mortars started falling near the road but the American volunteers continued. The joking stopped as the mortar fire intensified.

By the time the convoy stopped, the Americans were less than a kilometer from the fighting. They set up stretchers to receive casualties and the Peshmerga fanned out in a line across the fields. As ISIS fire started coming in around them, they settled on calling their position the Battle of Little Big Horn. In that battle General George Custer and his 700 men had been entirely wiped out by Native American Plains fighters. They handled pistols strapped to their belts, thankful they’d managed to borrow weapons from local contacts. “They’re just for personal protection,” Reed said.

The first casualty to pass their medical station was already dead. “It looked like his head was gone,” Coleman said.

The fighting continued. Mortars fells, machine guns rattled and the occasional coalition airstrike brought cheers from the Kurdish fighters. The only time the Kurds seemed at all afraid was when ISIS suicide bombers ran at them on foot. Then the Kurds shouted excitedly and shot them down, the bombers exploding in enormous grey clouds.

Later a young Peshmerga was brought in on the back of a pick up truck. There was a hole in his abdomen, part of his intestines protruding. Rieth and Reed bandaged him and inserted a cannula in a vein to administer fluids. Then they loaded him into a Peshmerga ambulance. “He’s got a 60 to 75 percent chance of living,” Reed said. “The problem is, if he’s hit in the diaphragm or lung, he’s got a long, long drive back to a hospital.”

By early afternoon the fighting had died down. The Kurdish fighters had taken their targets with two casualties on this part of the front. “This is the final line for us here,” said a Peshmerga officer, as bulldozers built an earth berm to provide cover. “We won’t move further.”

More Regional Tensions Escalate As The Battle For Mosul Draws Near

The Americans relaxed in the shade of an abandoned poultry farm and the Kurdish fighters brought them food, posing with them for photos. Reed and Rieth recognized one Peshmerga they had treated for a gunshot wound during an earlier offensive. He’d recovered and was back fighting.

After eating, the Americans started planning where they would go next. As they relaxed, they were soon joking about their unorthodox methods of accessing the front.

“We do a lot of lying to save people,” Reed remarked.