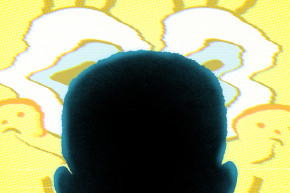 It used to be that parents were told to keep their babies away from glowing digital devices entirely. But today, the American Academy of Pediatrics released new guidelines that loosen expectations around “screen time.”

These new guidelines are accompanied by a series of papers that review the current research on children and consumption of media — from “Sesame Street” to platforms like Snapchat. They conclude that it’s OK to allow kids of any age to FaceTime or Skype — say with grandparents who live across the country. Parents of kids between the ages of 18 and 24 months can introduce other types of digital media, but should stick with high-quality educational content and watch it with their children, says the new report. Previously, the AAP strictly advised no screen time for kids under the age of two.

The new guidelines do provide one new, and very strict, time limit for kids ages 2 to 5: no more than one hour per day of digital media “to allow children ample time to engage in other activities important to their health and development and to establish media viewing habits associated with lower risk of obesity later in life.” This is a tightening of the previous recommendation of no more than two hours of screen time a day for kids over the age of 2. But for children older than 6, the new guidelines are looser, advising that parents should “place consistent limits” and “make sure media does not take the place of adequate sleep, physical activity and other behaviors essential to health.”

The AAP has also released an interactive online tool where parents can develop a personalized “Family Media Use Plan,” which underscores how the AAP has changed its approach from one-size-fits all to customizable. This new view also emphasizes the role that parents — not just the number of hours spent in front of a screen — play in how digital media effects kids. “Families should proactively think about their children’s media use and talk with children about it, because too much media use can mean that children don’t have enough time during the day to play, study, talk, or sleep,” said Jenny Radesky, lead author of one of the policy statements in a press release. “What’s most important is that parents be their child’s ‘media mentor.’ That means teaching them how to use it as a tool to create, connect and learn.”