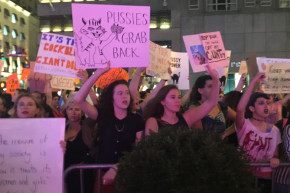 Pussy Grabs Back At Trump Tower
By Ryan Beckler

Pussy Grabs Back At Trump Tower 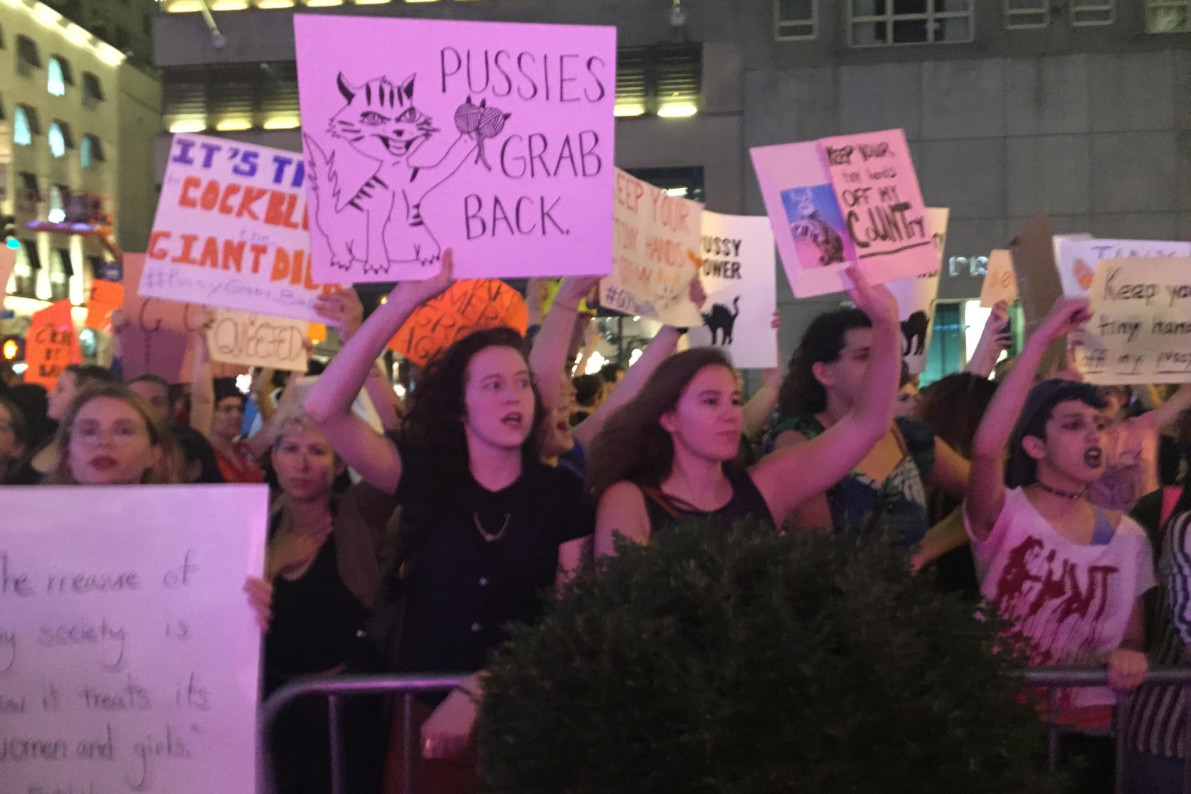 Hours before the final presidential debate, 1,000 people, dressed in vagina costumes and equipped with colorful signs, gathered for a Pussy Power protest outside of Trump Tower in Midtown Manhattan. The event was organized shortly after a video surfaced of Trump quipping to Billy Bush, then the host of “Access Hollywood,” that he could aggressively grope women whenever he wanted given his celebrity status.

Alyssa Kempinski was dressed in a pageant gown with a “Miss America” sashay. Perched on her shoulders was a large black “Trumptopus” with its tentacles draped over, under and around her.

“I was sexually assaulted on the street two days before the tapes came out,” Kempinski said. “To see [this support] out here is a lot.”

Raisa Rexer, accompanied by her mother and two young boys, lamented what the divisive nature of this election cycle. “I’m happy the tapes were released, but I feel sorry that it’s come to this,” she said, as the crowd chanted “pussy trumps hate!”

Amongst the crowd of pussy-proud protesters, cops, and extremely confused tourists streaming out of Tiffany & Co., was a smattering of Trump supporters. One man repeatedly shouted “Long live men! Put that on CNN!” Another held a towel in his hand and covered his nose when passing female protesters because as he said “the pussy smells like garlic.” A female Trump backer who said she has interacted with the Trump family several times feels her candidate was provoked by Billy Bush into saying the predatory things that have rocked his campaign in recent weeks.

“And listen, I have two boys. Sometimes boys have conversations,” she said.

But the pro-pussy protesters were undeterred. A young boy named Zane held a sign that read “Dear Mr. Trump, I respect my mom, I respect my sisters, I respect women, why don’t you!!?” “He’s here to support his mom and his sister,” his mother Dawn Babbush said. “Boys need to be a part of this conversation too.”

“Women have so objectified by Donald Trump, today’s about coming out and putting a face on some of the things he’s objectified for,” she said. These are the people who have abortions, bleed from there whereevers, and have pussies. It’s time to see us.”