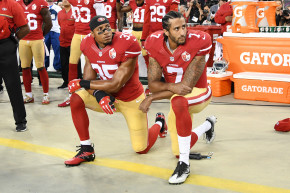 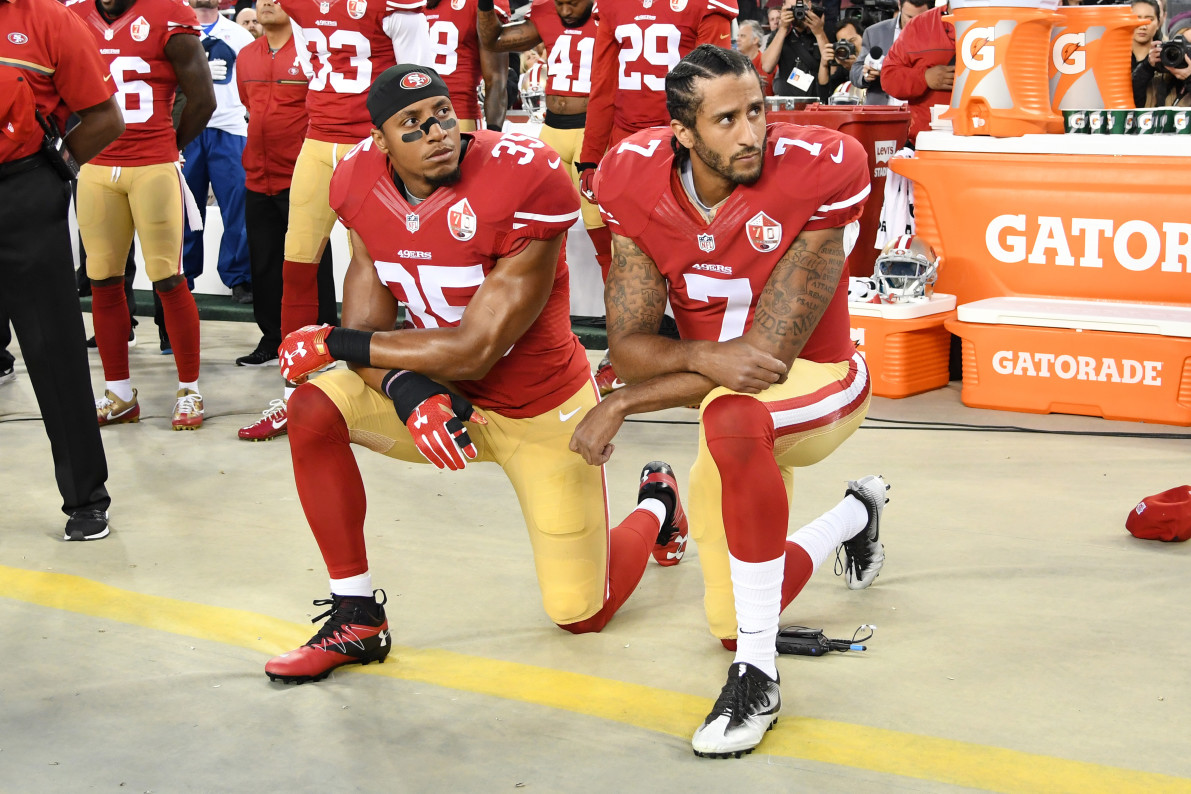 The Buffalo Bills whomped the San Francisco 49ers on Sunday, 45-16, as LeSean McCoy et al. literally ran wild against the Niners’ second-worst run defense. They rumbled for 312 yards on the ground, the highest total in a regular season game since Buffalo racked up 315 rushing yards in 1992 against the Atlanta Falcons.

In his first start in almost a year, Colin Kaepernick had a decent outing, showing glimpses of the read-option dual threat that powered the Niners to the 2013 Super Bowl. As expected, a bevvy of Bills fans used the occasion to reveal their worst selves and produce some deeply vile merch.

Kaepernick’s received more than a few death threats, but this one specifies exactly how one should commit murder.

Shirts with a rifle scope trained on Colin Kaepernick selling for $10 outside of Ralph Wilson stadium. pic.twitter.com/bSuxF3G5qq

Or, if you’re filled with repressed homoerotic lust, but the only way it can manifest itself is via rage and loathing, perhaps this garment is more your style. That said, you have to respect that whomever cranked up his or her silkscreen made sure to use the correct 49ers font and colors.

well, we knew Kaepernick playing in Buffalo was going to be interesting pic.twitter.com/z4ed89s0d3

Going tailgating and imbibing a nice, cold beverage made from hops and barley, but don’t want your precious, lily-white fingers to get cold? Here’s the item just for you.

These are for sale in the #Bills lot.
2 for $5. pic.twitter.com/NLTC2C9DeZ

There are some spelling issues at play here, but you can’t deny that proper treatment of the digestive tract is something we can all get behind.

Someone even went to the trouble of propping up a tackling dummy complete with a wig and Kaepernick jersey. Then, they incorrectly identified Kaepernick’s religious background while a nice lady and a jacked up dude pretended they too were a real, live sports person.

As he entered the field, fans made sure to remind Kaepernick that he was adopted, because of course they did.

To be fair, Kaepernick did attract a few supporters, including this pre-game march.

#Bills fans leading march in support of Kaepernick. They plan to kneel while the anthem is played. #49ers pic.twitter.com/vGumORFit4

But regardless of where anyone stands vis-à-vis the ongoing protests, one thing that we as a nation can agree on is that Bills fans will do whatever it takes to make sure they get drunk. [Warning: so NSFW]

Kaepernick chose a slightly different garment, and once again, calmly explained in a post-game interview that despite the hatred he’s incurred, he’ll continue. “I knew the consequences of what could come from this and I was prepared for that,” he said. When asked about fans chanting “U-S-A, U-S-A,” during the anthem, he laid out what should be patently obvious by now, terrible t-shirts and not-at-all-concealed bigotry be damned.

“I don’t understand what is un-American about fighting for liberty and justice for everybody; for the equality that this country says it stands for,” said Kaepernick. “To me, I see it as very patriotic and American to uphold the United States to standards that it says it lives by.”