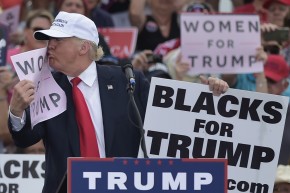 Here Are A Ton Of Hypocritical Trump Tweets About Sexual Assault

Trump railed against Bills Cosby and Clinton when they were accused — but not convicted — of sexual assault, just like he is now. 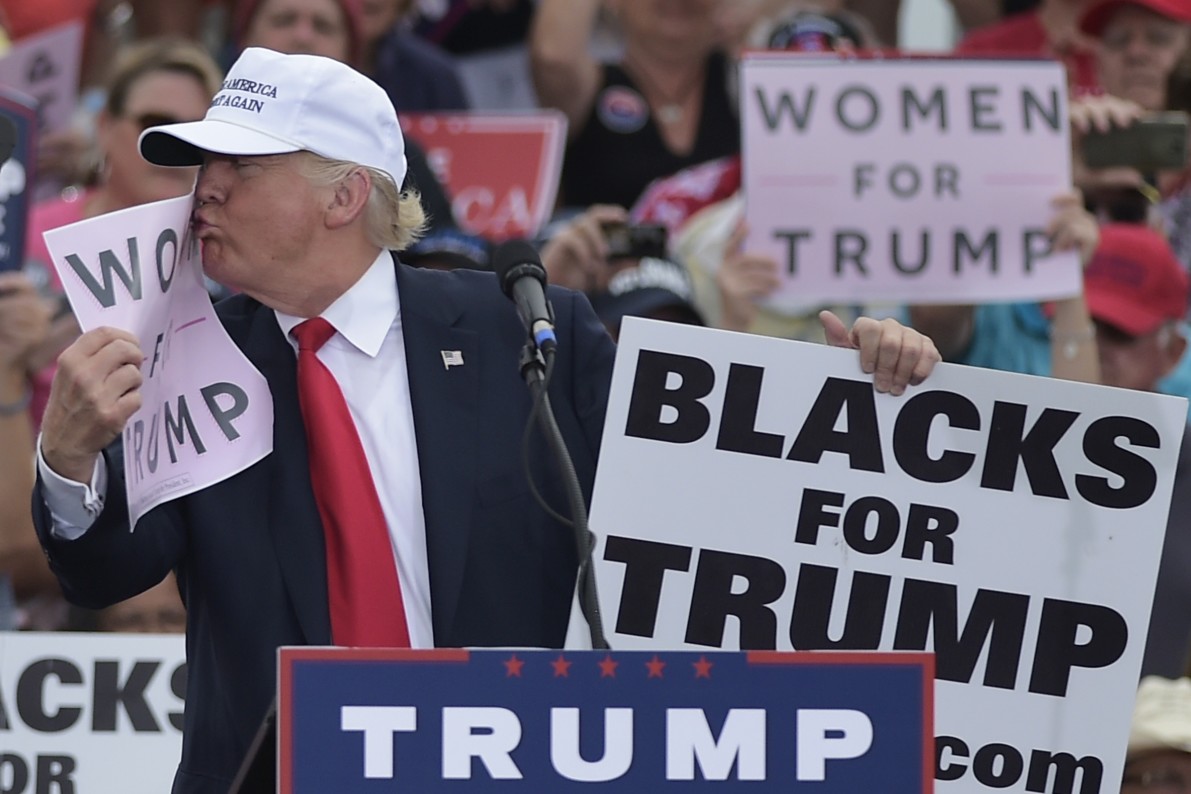 Republican presidential nominee Donald Trump awoke this morning to several new accusations of sexual assault and other improper behavior towards women, to go with the handful of previous allegations made against him (not to mention his own words in 2005). While Trump wants his voters not to give him the benefit of the doubt, he himself has been more than happy to mock other men who faced similar accusations.

Trump and his campaign have vigorously denied that he has ever sexually assaulted a woman, both during the second presidential debate (though he had to be directly asked by moderator Anderson Cooper about it multiple times first) and when asked for comment on those articles. Trump’s campaign also threatened to sue the New York Times for its article with stories from two women who said they were groped by Trump.

The accusations go back decades, demonstrating, if true, a pattern of predatory behavior from Trump. As it happens, Trump has been very vocal about other men who were accused of being sexual predators, and happy to believe and support their accusers despite, in some cases, having nothing more to go on than their word and, usually, the large number of women making those accusations.

Sometimes, those tweets seem to be born out of apparent concern for the women affected or, more likely, Trump’s eagerness to insert himself into a national conversation or a misguided attempt to reinforce a point he’d previously made (say, about immigrants from Mexico being rapists):

I am no fan of Bill Cosby but never-the-less some free advice – if you are innocent, do not remain silent. You look guilty as hell!

Bill Cosby is foolish, stupid, or getting bad advice in remaining silent if he is innocent. Probably guilty! Not a fan.

Sexual assault and rape in the Armed Forces is a Massive problem that nobody wants to talk about or do anything about-the big dark secret!

Just in—all efforts to stop sexual abuse in the military have totally failed—in fact, the stoppers have become the abusers.

An interesting and very sad article on rape at the border. Thank you @HuffingtonPost. https://t.co/wjNPX4sWs5

Other times, the tweets are clear attempts to use women’s accusations for his own political gain, and sometimes run contrary to previously tweeted feelings about the person being accused, despite having the same evidence available at the time.

Hillary Clinton has announced that she is letting her husband out to campaign but HE'S DEMONSTRATED A PENCHANT FOR SEXISM, so inappropriate!

If Hillary thinks she can unleash her husband, with his terrible record of women abuse, while playing the women's card on me, she's wrong!

I hope Bill Clinton starts talking about women's issues so that voters can see what a hypocrite he is and how Hillary abused those women!

The worst thing Hillary could do is have her husband campaign for her. Just watch.

The Clintons spend millions on negative ads on me & I can’t tell the truth about her husband? Don’t feel sorry for crooked Hillary!

Amazing that Crooked Hillary can do a hit ad on me concerning women when her husband was the WORST abuser of woman in U.S. political history

There’s never been anyone more abusive to women in politics than Bill Clinton.My words were unfortunate-the Clintons’ actions were far worse

Bill Clinton did a great job last night–the Democrats are lucky to have him. Do you really believe he likes @BarackObama?

Bill Clinton has been Obama's most effective surrogate out on the trail.

Clinton commented in Ohio today that @MittRomney is right, the economy has not been fixed under Obama.I always said Bill was an honest man.

And then there’s Anthony Weiner, the disgraced New York politician and now-estranged husband of close Hillary Clinton aide Huma Abedin. Trump singled him out for particular vitriol, saying Weiner’s (multiple and admitted) sexts to women demonstrated that he was a serial predator and pervert, and on that basis should not hold public office.

Degenerate former Congressman Anthony Weiner is trying to make a comeback. He is a sick & perverted man that New York does not want or need.

Keep an eye on Anthony Weiner. Weasels are hard to get rid of.

Scary thought–what is the pervert Anthony Weiner doing with all the free time he has. Does he collect unemployment?

Scary thought–is the sexual pervert Anthony Weiner now in Charlotte? Did he bring his phone with him?

Is Anthony Weiner also delusional? Add him to NY Sex Offender list instead!

I sure hope the sexting pervert Anthony Weiner runs for mayor. Will be great fun watching him both lose and be humiliated.

In 2013, Trump made it something of a personal mission to rally against Weiner and prostitute-enjoyer Eliot Spitzer as New York City mayoral and comptroller candidates, respectively, based entirely on their past sexual improprieties that he said should disqualify them for public office.

Weiner says many more pictures may be out there—this is just what NYC needs, a pervert Mayor.

As hard as it is to believe, sexting pervert Anthony Weiner is leading in some polls for Mayor of NYC.

With the two wacko perverts–Spitzer and Weiner–NYC politics has become a joke all over the world.

Be careful – sexting pervert Anthony Weiner is upping his campaigning. When will new pictures be released?

Weiner and Spitzer are on top of the latest polls. A sad day for the greatest city on earth! They will spend lots of time together.

Some good news for New York – Weiner has dropped 12 points in the polls & that is before more of the pervert’s old texts are released.

@StephenDoody3
"@realDonaldTrump Do you think Anthony Weiner deserves a 3rd chance?" No.

"@realJamesScott: @realDonaldTrump what are your thoughts on Weiner's press conference?" Wiener is seriously sick and will never change!

For the sake of New York City, all recent sexting victims of Anthony ‘Carlos Danger’ Weiner should come forward.

With Democrats Spitzer, Danger-Weiner & Filner, which party really has the war on women?

With the whacko pervert Weiner about to be embarrassed, all women need to be on the lookout. Sexting begins 9.11 @ 12:01 AM

Danger-Weiner is a free man at 12:01AM. He will be back sexting with a vengeance. All women remain on alert.

I fought hard against Spitzer and Weiner, and both lost. For a while, when Spitzer was way up, it seemed that I was a lone voice! Good power

When it came to Weiner, Trump was very worried about underage girls. Though he had not at the time been accused of sending sexts to underage girls (he did admit to exchanging messages with a 17-year-old girl in 2011, but said they were not inappropriate), Trump said they should be particularly cautious, even issuing a “pervert alert” on their behalf.

In retrospect, Trump seems prescient: Nearly four years after that tweet, Weiner was accused of sexting a 15-year-old girl. He hasn’t quite confirmed nor denied this, simply saying he was “the subject of a hoax” but also admitting to “putting myself in this position.” Yet this may be a hollow victory for the presidential candidate: Speaking of 15-year-old girls, Trump was accused on Wednesday of walking in on Miss Teen USA pageant contestants while they were in the middle of getting dressed. Five contestants from the 1997 pageant recalled this, with one saying she was 15 at the time. (Other contestants denied that this happened.) Trump did not comment on that piece, but admitted to doing this when it came to his adult pageants in a 2005 interview with Howard Stern, as uncovered by CNN.

Now that Trump himself is in the same situation as these men, he has a very different take: Don’t believe the women even though there are so many of them, and multiple accusations of sexual impropriety won’t take him out of the running. Oh, and his own sexual prowess is, of course, perfectly fine for public discussion.

Why didn't the writer of the twelve year old article in People Magazine mention the "incident" in her story. Because it did not happen!

The phony story in the failing @nytimes is a TOTAL FABRICATION. Written by same people as last discredited story on women. WATCH!

"@GriffinTimothy: @realDonaldTrump I bet ur great in bed" True!

Funny how that works.