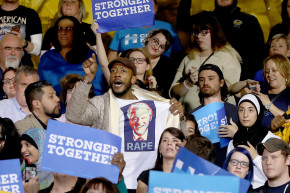 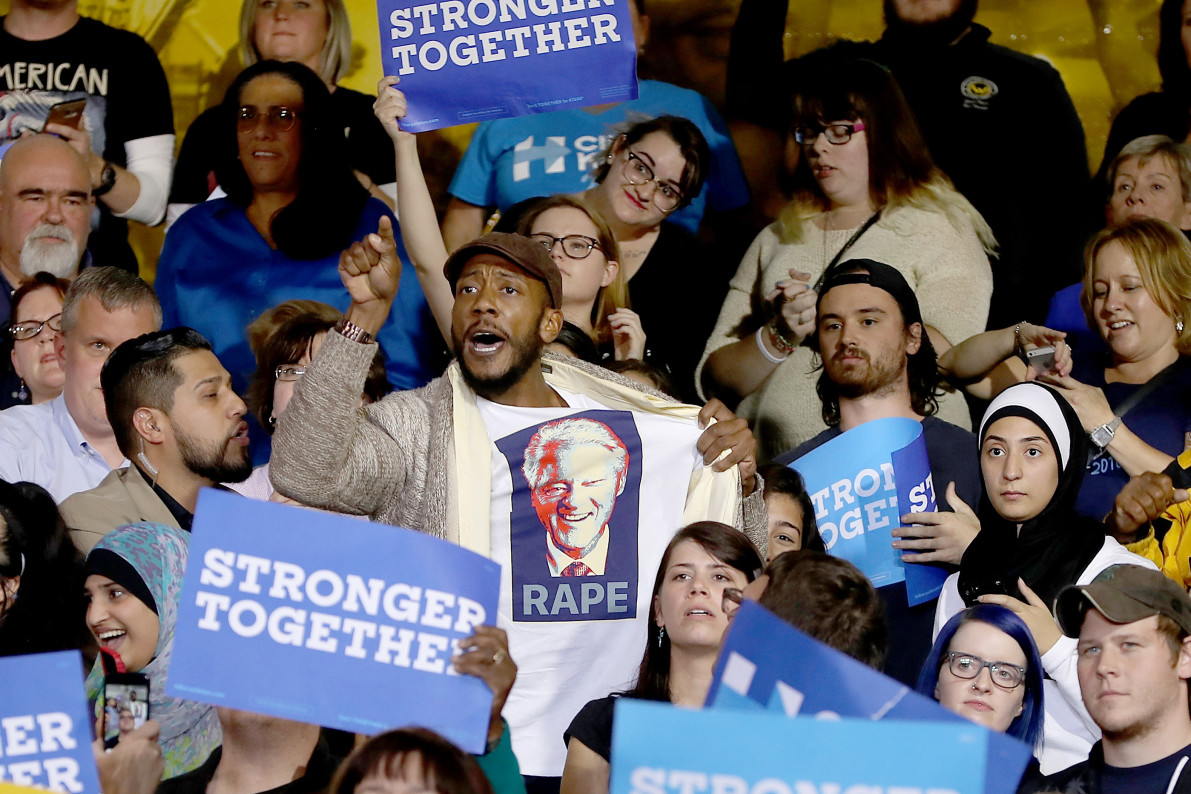 After Donald Trump’s reputation was again tarnished by new rounds of misogyny, his campaign and its allies responded by trying to bring the whole national debate down into the muck along with him. It looks like it’s working. Television channels and Hillary Clinton campaign rallies are becoming fertile ground for hecklers proclaiming “Bill Clinton is a rapist” after a right-wing commentator — and avid Trump booster — promised cash to anyone willing to carry out the stunt.

Alex Jones, a noted conspiracy theorist, appealed to would-be bounty hunters looking to force the unproven claims in the final stretch of the presidential campaign. On September 30, he offered $1,000 to anyone who could get him or herself pictured on television wearing a “Bill Clinton rape” t-shirt (which Jones happens to peddle for $19.95 on his Infowars website). Those who can be heard shouting “Bill Clinton is a rapist” while donning the shirt, designed by political operative Roger Stone, will receive $5,000.

“Wear it. Get aggressive. Start the conversations. Get on TV with it,” said Jones, who believes that the Sandy Hook massacre was a hoax and that Hillary Clinton might be “a demon from hell.” It’s been open season on Bill Clinton since.

Less than 24 hours later, the first supporter materialized during a live broadcast of Fox & Friends in Midtown Manhattan. As show hosts Tucker Carlson, Abby Huntsman, and Ed Henry introduced a segment on animal shelters, a shifty onlooker behind them suddenly ripped open his button-down dress shirt to reveal a Clinton rape tee beneath. The man, who appeared to be in his twenties, then sprung toward the guard railing shouting “Bill Clinton is a rapist” five times before security managed to drag him off the set.

Jones-inspired hecklers — nearly all of them conspicuous Trump supporters — have since managed to sneak shirts, signs, and chants bearing the Clinton rape accusation onto MSNBC, CNN, and The Today Show. More emboldened agitators have gone so far as to wade into enemy territory by appearing at major campaign events in support of Hillary Clinton.

“Those folks are auditioning for a reality show,” an undaunted Barack Obama joked after a man and woman — both wearing tank tops with “Bill Clinton Rapist” and “Infowars.com” scrawled in magic marker — were ejected from a rally in Greensboro, North Carolina on Tuesday. Over the last week, Hillary Clinton, her vice presidential pick Tim Kaine, and even Bill Clinton himself have faced public taunts, outbursts, and interruptions by those claiming the 42nd president is a sexual predator.

Today while campaigning for HRC, Obama was interrupted by a handful of Bill Clinton 'rape protesters.' What a BEAUTIFUL thing! RT! #Hillary pic.twitter.com/fHgC0IZfMc

Jones has gleefully kept his audience abreast of these incidents, plugging each one on his daily radio show and Infowars website. The impact has been further magnified by Trump fans who have shared viral video clips across Facebook, Twitter, and YouTube. Conservative news outlets including Breitbart, The Drudge Report, and Fox News have made the Clinton rape hecklers the subjects of headlines on their websites as well.

The Trump and Clinton camps have traded accusations of mistreatment of women for months. Clinton has noted that Trump, a thrice-married real estate developer, has publicly insulted women based on their appearance repeatedly; advocated “punishment” for those who seek abortions, and; has made lewd comments about aggressively kissing and groping women that many call sexual assault.

Trump’s campaign, meanwhile, has attempted to leverage the support of women who have accused Bill Clinton of sexual abuse. It has also claimed that Hillary Clinton has tried to cover up her husband’s alleged behavior. Bill Clinton has denied all the allegations made by his accusers and has never been charged with a crime.

Jones and other conservative commentators say that the mainstream media has deliberately “covered up” the Clinton accusations, which has given his contest added importance.

“This is about the people overriding the control and censorship that’s in MSM,” Jones said in an October 2 video, referring to mainstream media. “We’re risking losing the country. Desperate times mean desperate measures. So I need all of you to take action.”

The ongoing rape stunts have electrified many Trump supporters and conservative media consumers enough to compete with the interest generated from the latest misogynistic bombshell consuming the Republican nominee. Clinton’s rape accusations have been mentioned over 872,000 times on Twitter in the 13 days since Jones announced his bounty, a Vocativ analysis found. By contrast, social media users shared the hashtag #TrumpTapes some 975,000 times in the days since a leaked NBC tape revealed Trump talking about grabbing women “by the pussy.”

It remains unclear just how many people have actually won bounties from Jones since the heckling campaign began. Nor is it know how many Clinton rape t-shirts Infowars has been able to sell. Neither Jones nor Infowars responded to Vocativ’s requests for comment.