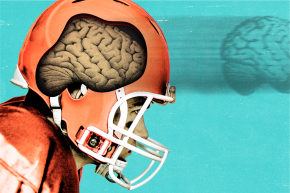 The Blood Test That Could Save Football
By Joe Lemire

The Blood Test That Could Save Football 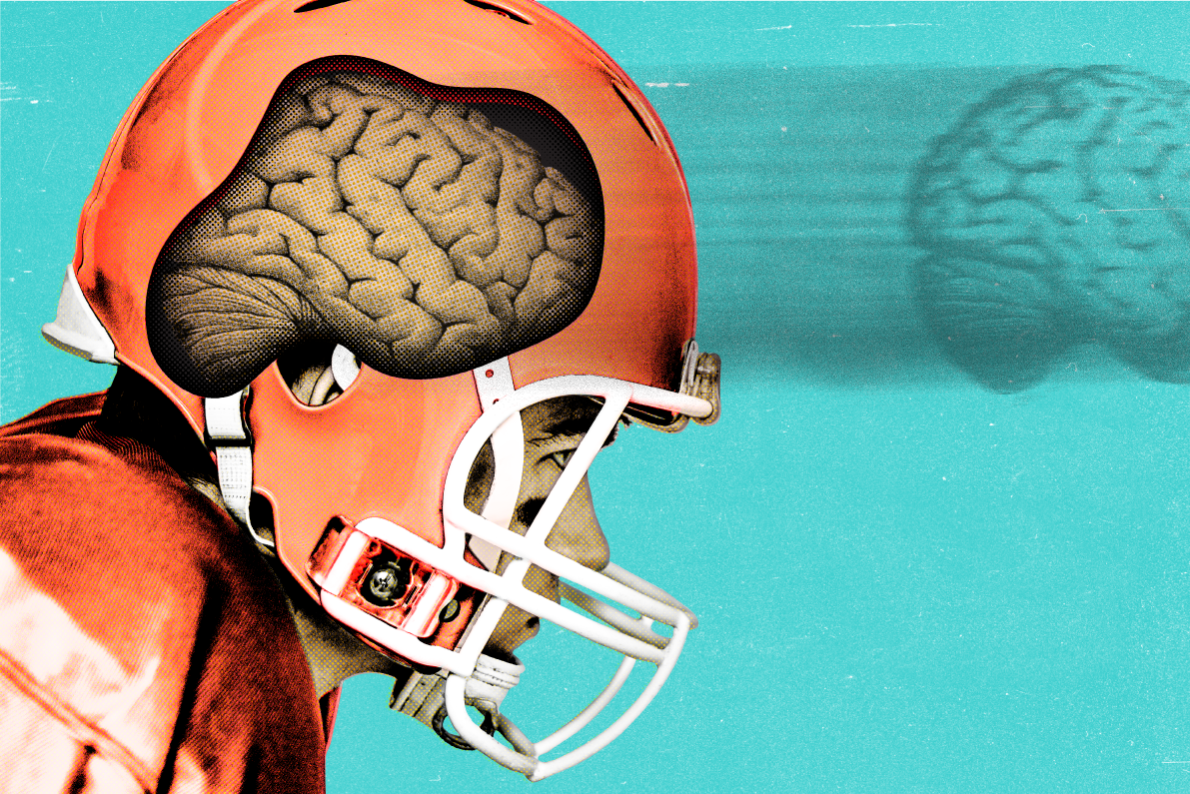 LEXINGTON, Mass. — “I’m a frickin’ pioneer, man,” Kevin Hrusovksy, CEO of Quanterix said. “I see the opportunity to eliminate pain and suffering . . . and we’re going to do it.”

The revolutionary work is happening in a nondescript corporate office where a dozen armoire-sized automated boxes glean minute protein biomarkers in blood samples with unprecedented sensitivity. Quanterix’s proprietary technology can isolate a single blade of grass in a field the size of Alaska, says Hrusovksy.

Such technology, combined with an emerging body of science surrounding biomarkers, whose applications extend to neurology, has caught the National Football League’s attention. Recent medical research has documented the release of several blood-borne biomarkers such as tau proteins, GFAP, UCH-L1, and neurofilament light—yes, one of the substances is known as “NFL”—after traumatic brain injuries.

Blood tests could soon diagnose concussions—and even the onset of chronic traumatic encephalopathy, CTE, a neurodegenerative disease that has afflicted many former football players—and do so objectively within as little as 20 minutes.

A successful biomedical entrepreneur, Hrusovksy had retired except for service on a few boards, including Quanterix’s, at which point his colleagues talked him into taking over as CEO. He’s working to commercialize the technology, an offshoot of the concept behind Illumina, a genomics company founded by Tufts chemistry professor David Walt.

“I started studying it and concluded,” Hrusovksy said, “this might be the most disruptive technology of my lifetime in what it can do for the world.”

Quanterix, which was conceived in 2007 but fully opened for business in late 2013, expects its technology to eventually be able to reduce the need for mammograms, predict heart attacks, and, in the sporting landscape, confirm concussions and identify the neurodegenerative tipping point at which more head trauma would trigger the onset of CTE.

Right now, the blood work can be processed in 45 minutes by using one of its large Simoa (single-molecule immunoarray) analyzers. A hand-held version—which would be necessary for a football sideline—is in the research-and-development phase, and other biomarkers can be evaluated in only 20 minutes, offering Quanterix hope that its concussion examinations can be done so swiftly, too. That’s still longer than most NFL head coaches would prefer, of course, but a reasonably short enough time that would make such mid-game diagnoses feasible for a league that, at least publicly, touts its concern for player safety.

Here’s how the technology actually works. Antibody assays specific to the targeted protein act like fish hooks and latch onto the biomarker. They are then deposited into one of 219,000 tiny wells on what looks like a compact disc. Invisible light is emitted from each repository signifying whether it contains the marker, which is then tabulated to quantify the results.

A 2014 study led by Dr. Henrik Zetterberg and published in the neurology edition of the Journal of the American Medical Association tracked 28 Swedish hockey players with regular-interval blood testing following concussions and found that identifying the number of total tau proteins could “predict the severity” immediately after a concussion, “monitor the course of recovery,” and track the number of days for symptoms to dissipate for a safe return to activity. One year later, a study appeared in the same journal linking tau to traumatic brain injuries in U.S. soldiers who had served overseas. Both studies used Quanterix’s analyzer.

Dr. Francis Conidi—who runs the Florida Center for Headache and Sports Neurology and is the team neurologist for the NHL’s Florida Panthers—selected the Zetterberg study for presentation as promising research in his role as vice chair of the American Academy of Neurology’s Sports Neurology Section. In an interview, Conidi emphasized the word “promising” about the use and identification of blood markers for concussions; he has collaborated with Florida’s Banyan Biomarkers, which is doing parallel work to Quanterix.

Dr. Jeffrey Kutcher, director of the NBA’s concussion program and adviser to the NFL and NHL Players’ Associations, said he is optimistic “in the long run” about such technology but cautions that there aren’t enough benchmarks in the medical literature to evaluate the results.

“In the future, if we have enough data from clinical scenarios where somebody can say, this level of tau in the blood over this period of time leads to ‘this’ X outcome, that starts to become useful,” Kutcher, who is also the national director of the Sports Neurology Clinic at The Core Institute in Michigan, said.

As Conidi wrote in Practical Neurology, active professional athletes are loathe to allow much medical data collection. “Most NFL players and professional athletes in general are reluctant to participate in clinical studies,” he wrote, “for fear the results may be used against them to limit participation, terminate their career, or in contract negotiations.”

Kutcher also said that sidelines are a better environment for triage decisions than concussion diagnoses—the question physicians and trainers ask is, “Is it safe for you to play?” and not, “Are you concussed?” Kutcher advocated for “raising the neurological acumen” of the medical providers making those determinations as the key to improved care.

Conidi praised the value of clinical evaluations, which he said can be very effective when correctly administered; that’s especially true of the King-Devick exam, a vision test developed in conjunction with the Mayo Clinic and administered on a tablet computer. He also cautioned that the incidence of actual concussions is not that high.

Conidi said the research might be more fruitful for return-to-play decisions and especially for long-term diagnoses, given the worrisome outcomes from the cumulative toll of subconcussive hits. He has spearheaded research that found evidence of traumatic brain injury in more than 40 percent of retired NFL players

His medical practice sees four or five retired professional athletes per day, he said, and many are reluctant to undergo the spinal tap that’s currently needed to test for these biomarkers. A blood test for that would be “golden.”

“With significant certainty, I think we’re going to be able to—in the next five years—diagnose or at least understand where we are in these neurodegenerative processes,” Conidi said, before adding: “In my opinion, it’s probably going to turn out to be that CTE is an early form of Alzheimer’s where there’s genetic predisposition and a head-trauma trigger. And there’s a lot of evidence pointing to that at this point.”

The research, Hrusovksy said, is pointing toward a toxic type of tauopathy called phosphorylated tau that seems to appear at the onset of CTE. Quanterix’s diagnostic tests will be initially accessible to the public through blood testing at patients’ annual physical, first to establish a personal baseline and then to monitor for any changes.

“It will give us a point where we can figure out when is it that a concussion is going to trigger the neuro-degenerative disease CTE—just like cigarette smoking doesn’t immediately cause lung cancer,” Hrusovksy said. “It takes years of accumulated effect. Concussions, same way.”

Hrusovksy said he credits the NFL “for putting us on the map and showcasing us” after the league, in conjunction with General Electric, awarded his company a pair of grants in 2014 and 2015 for a total of $800,000. Goodell even cited Quanterix by name in his open letter last month announcing a $100 million investment in head trauma research.

“For example, Quanterix, one of the companies that won the first GE-NFL Head Health Challenge, is developing a blood test to reveal a concussion diagnosis,” Goodell wrote. “This would be a major breakthrough. Once this or similar technology reaches the market, not only will this impact football and other sports, but public health will also benefit as doctors will have better tools for accurate diagnosis.”

Quanterix and the NFL are in the midst of conversations to further apply the concussion- and CTE-detecting technology. There is no agreement in place, but Hrusovksy expressed optimism that the league is committed to player safety. (The NFL did not make an executive available following Vocativ’s request for comment.)

Hrusovksy said he had solicited some NFL team owners in a round of funding, but none chose to invest. Instead, he found venture capitalists who “moved on this like a fumble” and raised $46 million in Series D financing. Some independence from NFL revenue could prove fruitful, given the league’s track record of interfering and the conflicts that could arise.

The biotech company is entering a landscape pocked with skepticism. Despite protestations of its dedication to player safety, the NFL has dragged its feet on enacting real change—a league representative only acknowledged the link between football and CTE for the first time in March—but Hrusovksy said he’s faced “entrenched political infrastructure” in every field he’s worked, noting the clout of the tobacco and sugar industries.

In contrast with the opacity at Theranos—the high-profile blood-testing company currently accused of fraud—there are about 100 of Quanterix’s SIMOA machines in research institutions and pharmaceutical companies.

“It’s publication-based,” Quanterix vice president and general manager Mark Roskey, whose C.V. includes a microbiology Ph.D. and a postdoctoral fellowship at Harvard Medical School, said. “We’re not talking about anything that’s not in a refereed journal.”

Kutcher stressed that the safe determination of when an athlete can return to competition and the longitudinal monitoring of accumulated neural damage should be tracked more closely and considered more prominently. A recent study, though small in scope, signaled structural damage in youth brains even without a specific concussion diagnosis.

“I think next breakthrough needs to be a clinical revolution in which people recognize that concussion is not really the problem,” Kutcher said. “It’s long-term brain health that’s the problem. Concussions are medically defined as being transient. They are things that resolve and go away. . . .

That’s the breakthrough football needs to preserve its own long-term health as a sport. It’s the macro problem neurologists are now trying to solve with micro technology. That’s the revolution Quanterix and the NFL hope is drawing near, with broader implications on amateur sports and public health at large.

Hrusovsky concluded an interview by discussing the scientific basis for the beginnings of CTE, saying, “When is that? Boy, if our tests at some point can say, ‘You’re now at that, don’t get any more concussions or you’re going to trigger that,’ that would be big, wouldn’t it?”

An Ohio State alumnus, he reached into a large bowl in his office and withdrew a buckeye to hand a departing reporter. The tiny token, buried deep in one’s pocket, is said to convey good fortune.