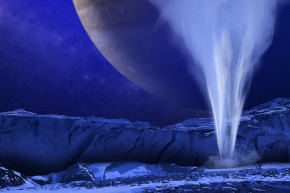 NASA has discovered more evidence of what might be plumes of water vapor erupting on Jupiter’s moon, Europa. The Hubble Telescope captured images of what looked like water vapor spraying 125 miles above the surface. Europa is believed to have a large ocean of water miles below its icy surface.

This discovery means scientists could reach the subsurface ocean without drilling through the extremely cold and hard layer of ice. NASA says Hubble’s images provide “evidence, not proof” that water plumes exist on Europa.