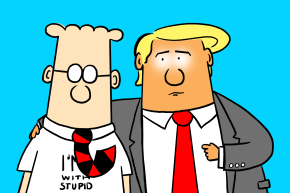 Based Dilbert: How A Cartoonist Became An Alt-Right Hero
By Jennings Brown

Based Dilbert: How A Cartoonist Became An Alt-Right Hero 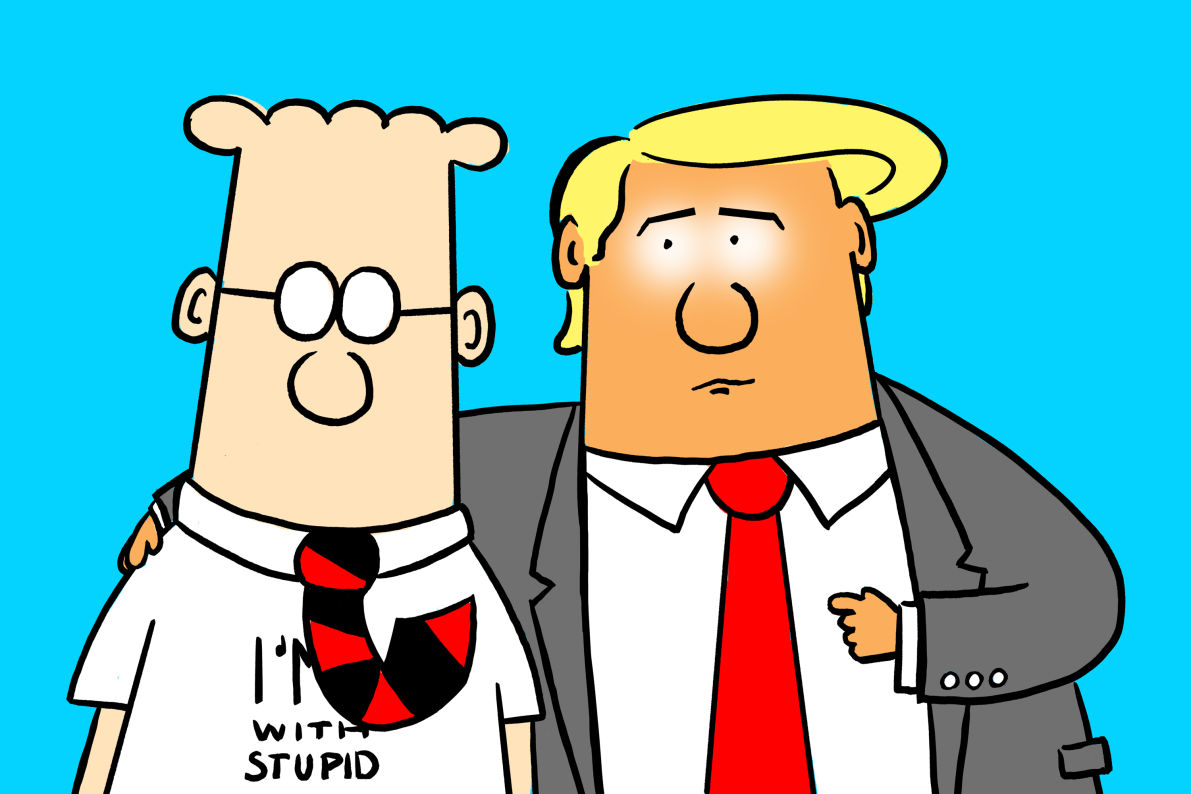 Many deplorable D-list celebrities, fringe politicos, and conspiracy theory-touting media pundits have gained celebrity status among the growing alt-right contingent for their outspoken support for Donald Trump, but one of the most unusual and slower-burning cases might be that of Scott Adams, creator of the cartoon “Dilbert.” Or as Trump trolls know him, a “super-savage based prophet.”

Adams has engaged marginalized middle-class white males for 27 years, since his comic, “Dilbert,” first launched. That strip follows the depressing life of the namesake character, a mouthless socially inept white-collar engineer who understands computers better than people and can never seem to get a promotion or maintain a romantic relationship. These days, when Adams isn’t drawing Dilbert, he’s usually blogging about Trump. Curiously, Adams didn’t even endorse Trump until Friday – a month and a half before election day. But in the 15 months since Trump announced his presidential campaign, Adams has been a major defender of the appeal of Trump and consistently recognized as one of the first public figures to predict that Trump would win the presidency in a landslide.

I hereby switch my endorsement from Clinton to Trump. #Trump #Clinton https://t.co/2q0yE7OIpP

Adams’ popularity within some of the more despised corners of the internet kicked off around 2011 when he got mixed in with men’s rights activists (MRAs). His involvement began when he asked the readers of his blog to pick a topic for him to write about. The fans chose “Men’s Rights,” so Adams wrote a post mocking MRAs and advising them to “Get over it, you bunch of pussies,” before explaining why he thinks women are inferior:

The reality is that women are treated differently by society for exactly the same reason that children and the mentally handicapped are treated differently. It’s just easier this way for everyone. You don’t argue with a four-year old about why he shouldn’t eat candy for dinner. You don’t punch a mentally handicapped guy even if he punches you first. And you don’t argue when a women tells you she’s only making 80 cents to your dollar. It’s the path of least resistance. You save your energy for more important battles.

The overall message of the post was that MRAs are right, but they need to stop complaining about it and take it like men. The post agitated the MRA community, but got even more coverage from feminist sites. Adams fired back with more sexist commentary and posted his debate with a Jezebel writer on his blog. All of this only helped win over the support of MRAs and brought more attention to their cause than ever before.

Periodically over the next few years, Adams added his own brand of Libertarian commentary to political and social issues, but nothing earned him quite the attention that the received when he started blogging about Trump. It was a simpler, more innocent time. Most pundits were treating Jeb Bush as the presumptive nominee and shrugging off Trump’s controversial statements while giving him the majority of the air time. As a self-proclaimed student of persuasion, Adams knew they were wrong and explained why in his blog post, “How Trump Becomes President,” back in August 2015.

“He won’t win over all of his haters, but I predict that his New York style will grow on people more than you would expect,” Adams wrote. “You could say his style is his biggest problem, but it might be self-solving with time and exposure. He is getting both.”

In the ensuing months, Adams has written more about Trump than any other subject. He’s described Trump as an “unstoppable clown car,” and claimed Trump has a 98 percent chance of winning the presidency. The cartoonist based this on his Master Wizard Hypothesis, which asserts “Trump is playing three-dimensional chess with a two-dimensional world and he will win the presidency in a landslide.” Adams has also written about Trump’s mastery of the art of persuasion, why Trump was justified in challenging Judge Gonzalo Curiel, why Trump will actually be good for climate change (despite the fact that the billionaire has said it is a hoax), why Trump would be safer for America than any other candidate, and many, many others. Since June 2015, Adams has written dozens of posts and hundreds of tweets about Trump, making him one of the most prolific Trump bloggers of this election.

Within almost all his screeds, Adams adamantly insisted neutrality, stating time and time again that he “disavowed all candidates,” “doesn’t agree with any of the candidates on policies,” and “didn’t know which candidate would do the best job as president.” He claimed the only reason he was blogging about Trump was that Adams — who is also a self-help author and a trained hypnotist — was fascinated by “Trump’s extraordinary persuasion skills.”

Adams mockingly endorsed Hilary Clinton in a post last June, claiming he was only doing so for his personal safety, because his life was at risk if he supported Trump. He also used the opportunity to (falsely) call out Clinton for comparing Trump to Hitler so that people would feel justified in killing Trump.

Much like with his immersion in the MRA community, the more attention Adams gets for his controversial views, the more he touts and fosters them. His tweets about Clinton and Trump have gotten progressively more trollish, making jokes that appeal to both MRAs, the alt-right, and Trump supporters obsessed with Clinton’s health.

@jackdorseysucks Ironic that Hillary is the Clinton with the wandering eye.

Is it my imagination, or is Clinton losing a fight with a cartoon frog? #Trump #Clinton https://t.co/TVHbodxesU

Do angry drunks have the temperament to be Commander in Chief? https://t.co/hq4IGVoAnA

Since the most popular Trump subreddit, r/The_Donald, was formed in June 2015 there have been nearly 1,000 posts about Scott Adams — many of which shower him with such Reddit high praise as “mad man,” “the savage,” and “oracle.” There’s even a “BASED DILBERT” flair that redditors have started issuing. (For the uninitiated, ‘based’ is a term alt-righters have taken on to describe people free of mainstream — i.e. liberal — hang-ups.)

Last April, Adams did an AMA on the subreddit. One redditor asked why Adams disavowed Trump after the candidate didn’t disavow former KKK grand wizard David Duke. Adams responded that he didn’t want to be “tarred with whatever ridiculousness” gets pinned on Trump and that “In my view, Trump is not currently qualified to be president because he scares too many of my fellow citizens. (He doesn’t scare me.) But I do think he can change that situation.”

Now it seems Adams is ready to be tarred. In his latest blog post, “Why I Switched My Endorsement from Clinton to Trump,” Adams wrote that his decision to officially support Trump was based largely on his concerns about Clinton’s health and estate tax plan, and Trump’s power of persuasion and ability to match the emotional state of the country.

Since then, Adams has gone full-troll, encouraging people to start coughing at the debate to trigger Clinton.

At this rate, it’s only a matter of time before Dilbert and Pepe the Frog team up for an animated buddy film.