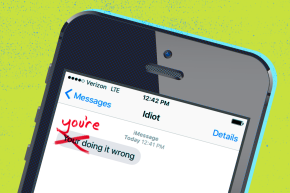 Make The New iMessage Even Worse With These ‘Grammar Snob’ Stickers

You can now correct your friends’ every typo, but should you? 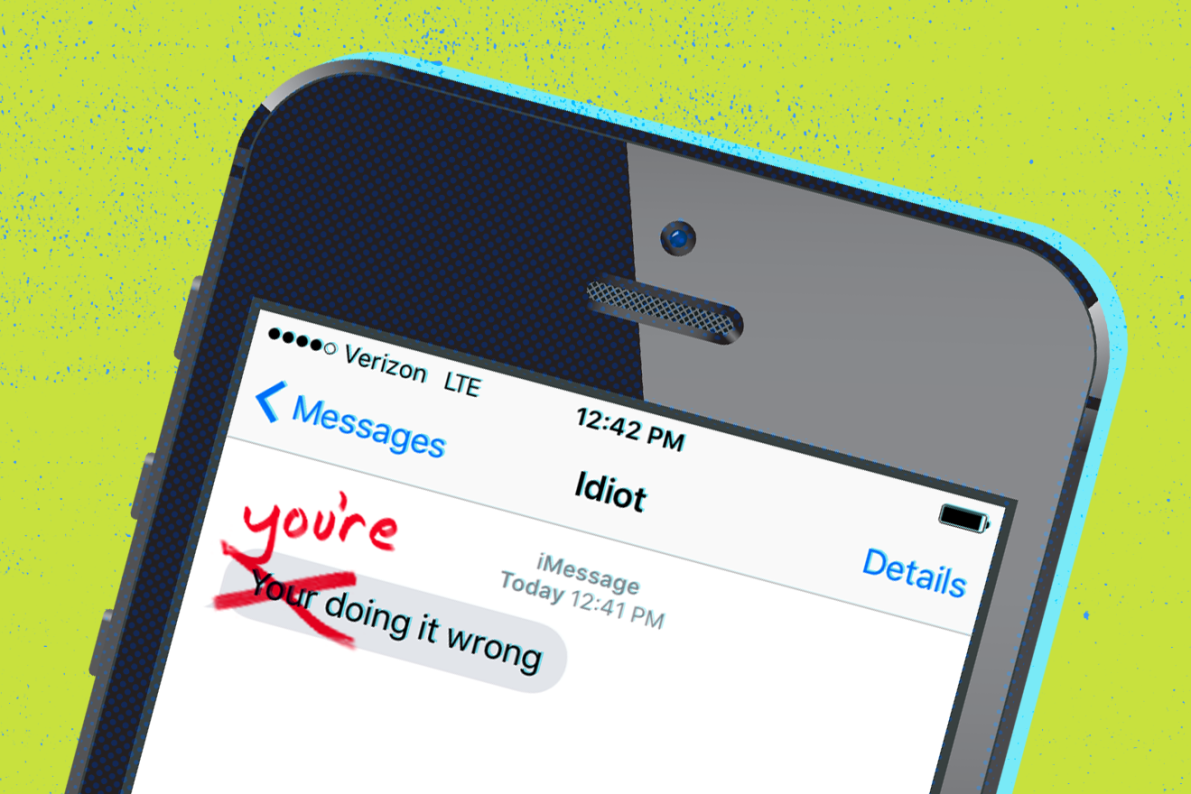 With the arrival of iOS 10 came a revamped iMessage which, among other things, gave users the ability to obnoxiously plaster stickers all over their conversations. So it was only a matter of time before an app like Grammar Snob popped up, which turns your smartphone into your English teacher’s red pen, and lets you shame your chat buddy’s every grammatical misstep.

The app, which costs $0.99, promises you can “add a little culture to your next message chat.” Hate when people say “your” when it should be “you’re?” You can fix that.

Likewise, common mistakes like confusing its for it’s, they’re for their or there, not knowing the difference between less or fewer, or lose or loose, are all there for the correcting by you, language king.

Irritated by other common misuses of phrase, like when someone declares that they “could care less,” when really they mean they “couldn’t care less?” Go bold. Go hard. Spare no one.

On Twitter, many folks feel their soul’s deepest purpose has been facilitated with the sticker pack:

There's now an app called Grammar Snob that lets you fix people's grammar in texts and send it back to them. My life is complete.

I think this MIGHT be the best feature of iOS 10. Please note, I just installed it! #GrammarSnob pic.twitter.com/lilYgDTkXN

Others were not so jazzed:

Debating about whether I can use this and still have some friends. #GrammarSnob https://t.co/v86jiD1KZY

But before you go shaking a finger at every typo you encounter, the internet is a veritable Greek chorus of warning for what could happen if you dare to tread in the art of correction. “Make enemies for life,” the Verge warns. “Grammar Snob stickers for iMessage are ready to ruin your friendships,” Engadget tsks. “Grammar Snob for iOS will make your friends hate you,” The Next Web declares.

And they’re right. At issue here is not whether such grammar mistakes abound and are deeply irritating. They do, and they are. No one is disputing that it’s important to communicate clearly and correctly and play by the rules of grammar. But what most grammar snobs miss is the fact that most mistakes of this nature — the missing or misplaced apostrophe, the accident of choosing a soundalike word with a different meaning — are accidents of haste, not ignorance.

We LOL it up because it’s easier than laughing out loud, and it’s logical to think other formalities would be lost in that abbreviated shuffle. It only matters if meaning is lost. “Your dumb” makes the same point as “you’re dumb,” and viewed in a certain light, it’s actually funnier by virtue of being as dumb, intentionally or not, as the person whose dumbness is being highlighted.

Also, science says jerks are more often the correcting types. Suzanne Lucas at Inc. covered a study from April looking at personality-driven responses to typos in emails that found that more agreeable folks are less bothered by typos. They see them, they note them, but they don’t see such errors as a fundamental failure of intelligence when you speed through “teh” versus “the.” Jerks think you’re a certifiable moron when you mess up “too” vs. “to.”

“The difference to me is that the former person is trying to be helpful while the latter person wants to demonstrate their superiority,” Lucas writes. Here’s an edit for Haney, then: Perhaps a future update on the sticker app could correct the name to Grammar Jerk.