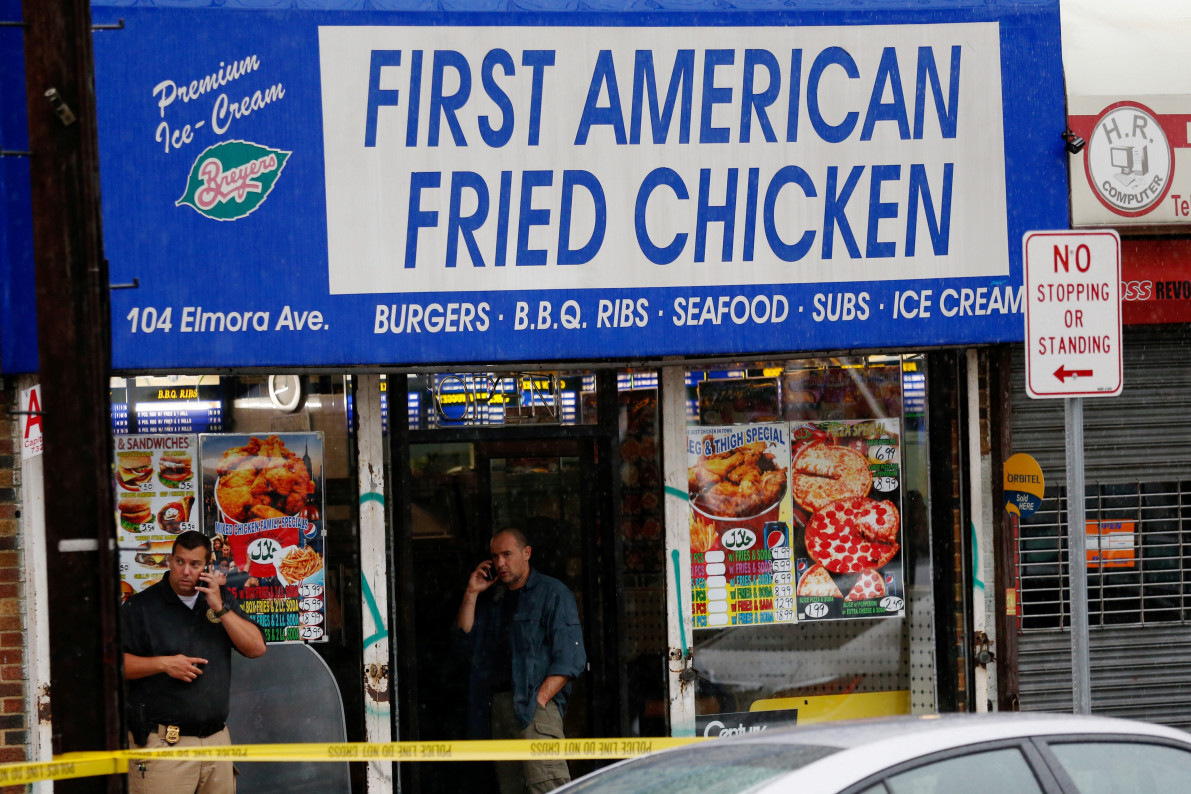 Online restaurant “reviewers” are flooding the pages of the restaurant owned by the family of suspected New York and New Jersey bomber Ahmad Khan Rahami — and the majority are leaving hate speech-filled reviews of the business owner and his family, not of the food they serve.

News broke on Monday that Rahami was a suspect in the attack, around when First American Fried Chicken, his family’s New Jersey restaurant, was raided by the FBI, along with the apartment upstairs. Almost immediately, reviews on Facebook, Yelp, and Google pages for the restaurant multiplied.

It is not clear what, if any, involvement Rahami’s family had in the alleged attack — but that hasn’t stopped “reviewers” from going so far as to wish death to everyone in Rahami’s family, or to all Muslims everywhere.

On Yelp, First American Fried Chicken had only 3 reviews before the bombings, and all were favorable (there was also one review that was marked as “not recommended” that gave it one star for its delivery service). There are now at least 64 reviews of the restaurant, which is currently averaging one and a half stars, and Yelp has put up an “active cleanup alert.” The site writes, “This business recently made waves in the news, which often means that people come to this page to post their views on the news.”

In a representative one-star review that Yelp put in the “not recommended” section, Mary J. said, “Me thinks [sic] there needs to be an ethnic cleansing here and fast!!!! Mohammed blows goats!”

The restaurant doesn’t appear to have its own Facebook page, just the automatic listing that Facebook sets up for a business. Still, someone changed its profile image changed to roast pig — a user-submitted edit that Facebook approved.

Some reviewers on the page just gave the business one star and wrote nothing, while others used the review space to express anti-Muslim sentiments. User Cassie Witek wrote in her one star review, “Your son is a POS, and I CANNOT WAIT until he gets whats [sic] coming to him! Every single [sic] of you will indeed get whats [sic] coming to you!!”

Many of the hate-reviewers also mentioned their support for the candidacy of Donald Trump, who has said he would ban Muslims from entering the U.S. if elected.

User Erik C Kummert said, “When Trump becomes president, we’re gonna line up all the rest of you assholes beside your shitbag son.” Another, Pat Livecchi, wrote, “You should all be rounded up and set on fire. I spit on your silly Muhammed.” (Livecchi has been more positive in reviews for other eating establishments, once saying in a five star review that he wanted to “rub the Maple Bacon and Egg Burger” that was served at a North Carolina grill “all over my body.”)

Others found an opportunity for dark humor, breaking out the expected set of puns. A Facebook reviewer said he “loved the #3 special ‘jihad chicken’ with a side of daesh potatoes” giving the site a five-star review. “Home-Improvised recipes, Explosive spice palates, prepped by cutting edge Devices.  Prepared fresh in top of the line pressure cookers…. This joint is the bomb, so come on down and get it while it’s hot!” wrote David E. on Yelp.

According to The New York Times, Rahami’s father, Muhammad, owned the restaurant and ran it with his sons, but had issues with the surrounding neighborhood. The restaurant was open all night, and attracted “rowdy crowds” early in the morning. Neighbors complained to the city council, which voted to force First American Fried Chicken to close at 10 p.m. Rahami’s father sued the city in 2011, believing he was being discriminated against because of his religion. Eventually, the restaurant was allowed to stay open until midnight or 1 a.m. in what the Times described as an “uneasy truce.” According to NJ.com, lawsuit is ongoing, but the Rahamis’ lawyer quit in 2015.

One of the few new reviews that wasn’t hateful or anti-Muslim was from someone named “EJ McCoy,” who gave a three star review: “There are many Americans who sympathize with this most difficult time in your life. I don’t believe in guilt by association. I am sorry that so many Americans are proving their worth with the venom and anger spewing from their lips. I pray for you and hope you guide your son now to know that whatever anger you had at the local government or even the US government, that there are better ways to deal with it. Please forgive those who don’t know how to.”

“Why don’t you move over to the Middle East lady [sic],” Jayme Tokit Scott responded.