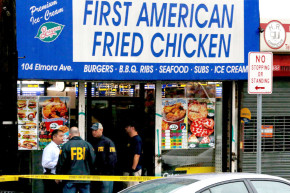 Relatives Of Bombing Suspect May Have Posted Jihadi Images

Two people reported to be related to Ahmad Khan Rahami, the man arrested in connection to Saturday’s bombings in Chelsea and New Jersey, shared images in support of Islamist militancy on Facebook, according to Vocativ analysis. The posters share the suspect’s surname and seem to have lived in the New Jersey apartment raided by police on Monday morning.

Mohammad Khan Rahami, who said online that he lived above the chicken restaurant run by the suspect’s family, shared an image around three years ago that appears to support jihad. The picture shows foreign fighters training in Syria, with a quote by Khalid Bin Walid, a military commander and companion of the Prophet Muhammad. “I bring the men who desire death as ardently as you desire life,” reads the quote, which is often shared on social media by jihadists. A reverse image search leads to a forum affiliated with Islamist and jihadist sympathizers.

That user, Mohammad Khan Rahami, checked in on Facebook more than two years ago at First American Fried Chicken, which is run by the bombing suspect’s family, telling a friend that he’d lived there. On Monday morning, the apartment above the restaurant was raided by law enforcement, after a bomb went off at a nearby train station.

Mohammad Khan Rahami’s Facebook profile shows connections with other possible members of the Rahami family. A second possible relative, known as Nasim Rahami, tagged in a family picture shared on Mohammad Rahami’s profile, as well as to other members of his family. Nasim shared an image in 2012 displaying the word ‘Jihad,’ a masked figure, and Arabic script often displayed on the Black Standard commonly employed by jihadist groups.

The text on the black image is the Shahada or Muslim declaration of faith, a phrase that while not necessarily radical itself also appears on the ISIS flag.