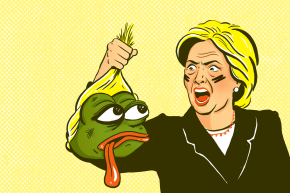 Hillary Clinton Goes To War With Pepe The Frog 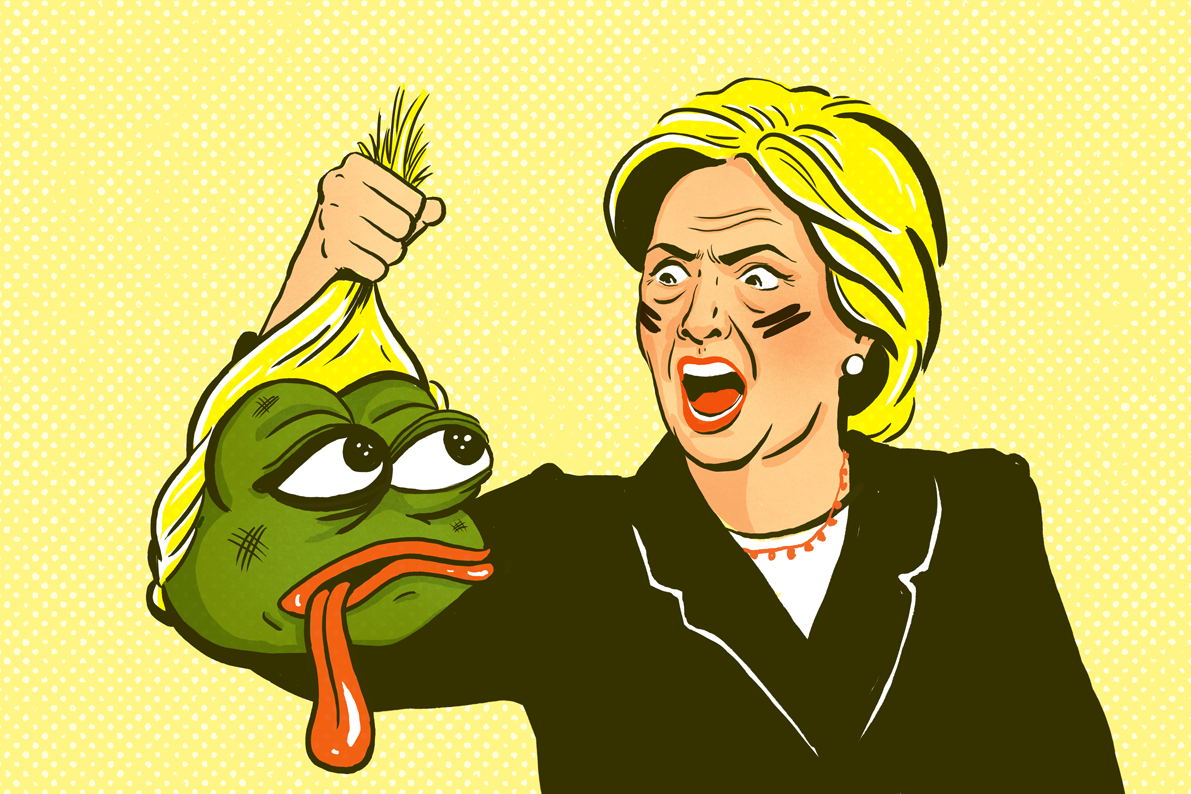 In her quest to engage millennials and label Donald Trump as a white supremacist, Hillary Clinton broke the cardinal rule of the internet. She has fed the trolls. And now the trolls are growing mightier than we ever thought possible.

On Sunday, Donald Trump Jr. shared a meme that mocked Hillary Clinton’s statement about half of his father’s supporters belonging in a “basket of deplorables.” The image showed a poster for Expendables 3, with the heads of Trump and some of his most outspoken and controversial supporters superimposed onto the bodies of Hollywood’s most haggard testosterone-fueled heroes. One of the characters of that imaginary film of Ann Coulter’s dreams wasn’t a person, but a mascot for the faction that has likely contributed the most to the rise of Trump. That character is Pepe the Frog — more specifically, Trump Pepe — and he speaks for the alt-right trolls.

A friend sent me this. Apparently I made the cut as one of the Deplorables😂😂😂 All kidding aside I am honored to be grouped with the hard working men and women of this great nation that have supported @realdonaldtrump and know that he can fix the mess created by politicians in Washington. He’s fighting for you and won’t ever quit. Thanks for your trust! #trump2016 #maga #makeamericagreatagain #basketofdeplorables

Likely seeing an opportunity to both appear internet-savvy and condemn Trump and his supporters, the Clinton campaign responded by publishing “Donald Trump, Pepe the frog, and white supremacists: an explainer.”

As the explainer explains:

The post then provides an abbreviated version of The Daily Beast’s article tracing the development of Pepe from MySpace cartoon to 4chan reaction meme to internet embodiment of existential angst to a “big green monster.” The final evolutionary stage came after “normies” like Katy Perry and Nicki Minaj began sharing Pepe art. That’s when trolls made an effort to reclaim Pepe by turning him into a symbol of everything that politically correct “social justice warriors” stood against. Of course, it was only a matter of time before Pepe got on board with the Trump train. Trump welcomed the grotesque amphibian with open arms.

While this deplorable version of Pepe is often depicted as a Nazi and a white supremacist, many alt-right Pepe-sharers believe this has more to do with pissing off liberals than hating another race or religion. Of course, that doesn’t change the fact that most of the Pepe memes shared by Donald Trump supporters on the Reddit, 4chan, and social media are, well, deplorable and racist — and that was the focus of the Clinton campaign post.

The article also called-out two of the alt-right’s deplorable heroes, deeming them horrifying.

The alt-right trolls were inflamed. The Donald subreddit has since erupted with response memes.

Some redditors used normies like Minaj and Perry to prove that Pepe wasn’t a racist or parodied the post to accuse Clinton of having ties to white supremacists. Many alt-right Pepe-lovers saw this as the beginning of a war. Hillary was coming for their memes.

The backlash sparked a call to frog arms.

The anger poured into Twitter. The #GreenLivesMatter movement has begun.

"If Pepe is the only card we have left, then deal me in."
But Pepe is great because Pepe is good. #GreenLivesMatter pic.twitter.com/9SBMhnIHKr

Of course, considering the Pepe explainer was written by Elizabeth Chan — a Clinton campaign senior strategist with a working knowledge of dank memes — it’s entirely possibly Hillary has no idea why she is battling with a cartoon frog.