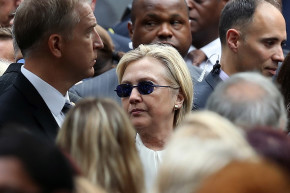 "Hillary's index finder is longer than her ring finger. This is obviously not her," one skeptic wrote while comparing pictures of Hillary Clinton and her supposed double 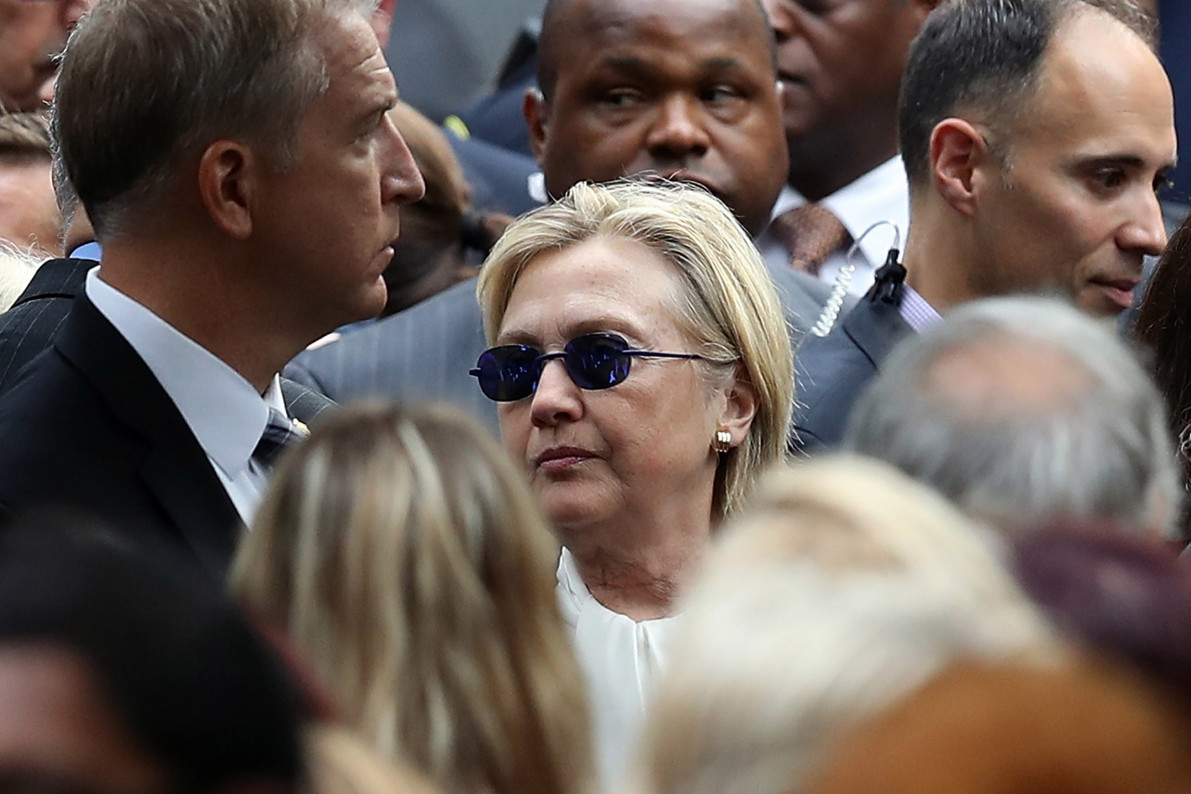 Hillary Clinton felt unwell and left a 9/11 memorial event early on Sunday morning. But then, a few hours later, the Democratic nominee appeared to be in high spirits as she left her daughter’s apartment in New York City. What explains the shift? Clinton either rested for a bit and then felt better, or — if you ask thousands of conspiracy-minded Twitter users — it’s because she uses a body double.

Clinton’s alleged health problems have long been an attack point for her political opponents, but they took a turn into the mainstream this weekend. Video footage shared widely on social media showed Clinton stumbling as she walked toward a parked black minivan at One World Trade Center in Manhattan, according to reporters at the scene. Clinton’s campaign team initially said she had “overheated,” but later confirmed she was recently diagnosed with pneumonia.

Clinton’s physician, Dr. Lisa Bardack, called it a classic case of “walking pneumonia,” and said the candidate is taking antibiotics and “recovering nicely.” But that hasn’t stopped the wild theorizing.

Shortly before noon, Clinton, 68, waved to cameras as she left Chelsea’s apartment, dressed in the same pantsuit and sunglasses she had been wearing at the commemoration. That’s when thousands of skeptics began speculating that the woman leaving was in fact a body double, and that the real-life Hillary Clinton was in fact elsewhere.

Vocativ discovered around 15,000 tweets using the hashtags #hillarysdouble, #hillarysbodydouble, and the words “Hillary” and “body double” between Sunday and Monday. Doubters tried to justify their belief that the Hillary who left her daughter’s apartment was a fake for several increasingly far-fetched reasons. “Not a Secret Service agent in sight. That’s why people are saying this is Hillary’s doppelgänger,” one user tweeted. Another claimed the Clinton photographed outside Chelsea’s apartment looked noticeably thinner than the “real” Clinton. One user, who offered a side-by-side comparison of Clinton and her apparent impersonator, suggested: “Hillary’s index finder is longer than her ring finger. This is obviously not her.”

Almost 300 others even named who they believed to be Clinton’s body double: Teresa Barnwell, a professional Hillary Clinton impersonator who actually met Clinton at a promotional event for her book, “It Takes A Village,” in California in 1996. On her website, Barnwell explained that when she met Clinton, the former first lady said: “Oh, you’re the one who can stand in for me and do the bad stuff I don’t want to do!”

The stumble on Sunday revived scrutiny of Clinton and her health. Some users compared the Democratic candidate to another presidential pneumonia sufferer: William Henry Harrison, who was president for 32 days when he died from illness (which, it’s worth noting, occurred in 1841). Franklin D. Roosevelt, others pointed out, was a chain smoker who had coronary heart disease. Ronald Reagan likely had Alzheimer’s in his final days in office. Vocativ discovered plenty of users defending Clinton who pointed out that George W. Bush once choked on a pretzel, and George H.W. Bush vomited and then fainted at a banquet dinner in Japan.

Okay, so I'm not a fan of conspracy theories.. but Hillary really did look 50 pounds lighter after leaving the hospital. #hillarysbodydouble

Different shaped ears ears and noses? One is Hillary before the fall, one after. #HillarysBodyDouble #HillarysHealth pic.twitter.com/VOKgqm3GQH

Do you have a body double @@hillaryclinton ? The nose is different #HillarysBodyDouble @ap #hillaryshealth pic.twitter.com/lI2a0pL9EQ

#HillarysBodyDouble SHE HAS BEEN FOUND!! Here is her Facebook and she claims to be an actress! RT RT RT pic.twitter.com/IIBAiT53SL

A Twitter account associated with Barnwell initially stoked the fires of the body double conspiracy, tweeting an undated picture of the actress across the street from Chelsea’s apartment. Hours later, the account tried to put an end to the conspiracy, tweeting: “OK people, calm down. I was in LA today, all day. Was just messin’ with your crazy conspiracy minded little heads. Go to bed.”

However, even that wasn’t enough for some skeptics. “Nice to know that they got you threatened too,” one user replied to Barnwell’s tweet. “Don’t worry, if you don’t say anything they won’t have to kill you :).”