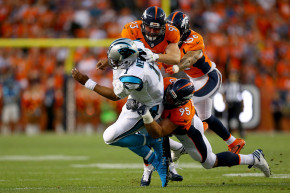 Cam Newton Got Hit In The Head A Lot

And, as per usual, the NFL did a whole lot of nothing about it 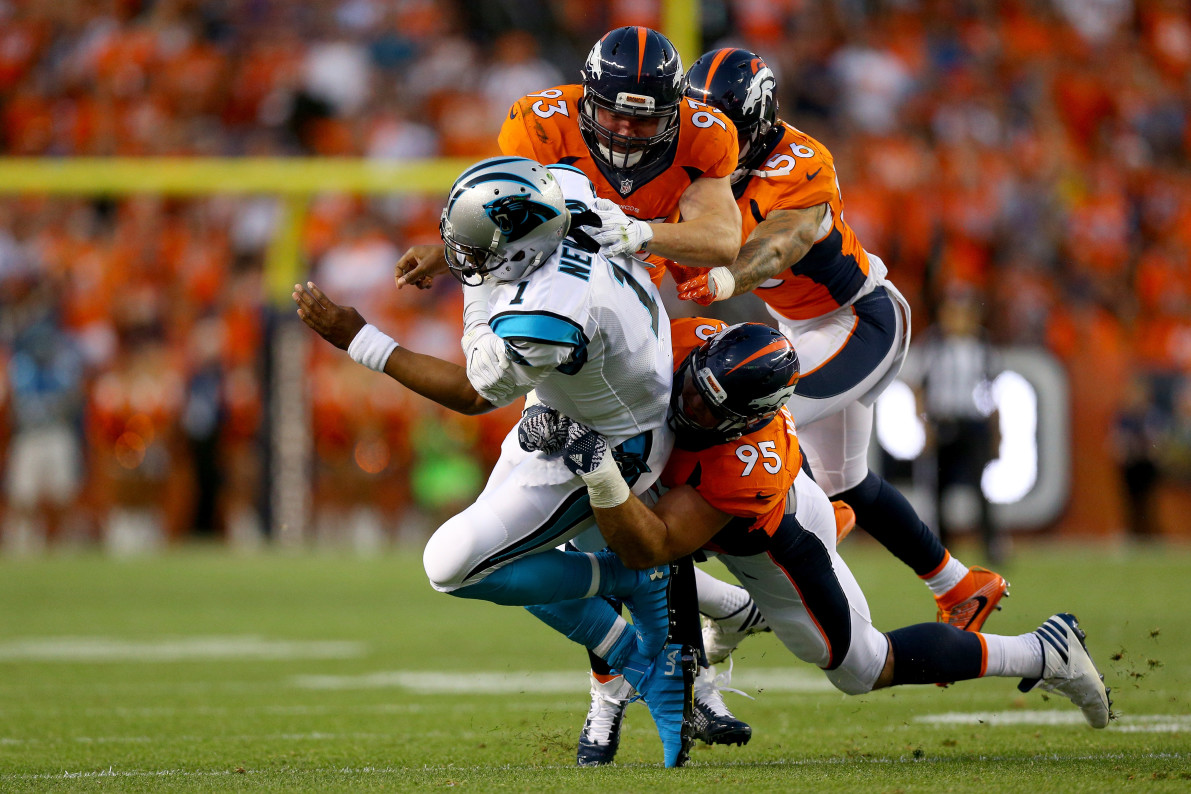 The Broncos’ blows kept coming, knocking Panthers quarterback Cam Newton in the head four times, yet only one of those illegal hits was flagged and not once was Newton approached by a doctor to check for a concussion.

Furthermore, that one Broncos penalty wasn’t even enforced because Newton was simultaneously penalized for illegal grounding, which seems rather harsh because anyone would chuck the ball to any old place if they were getting cracked in the head. Here’s a representative sample of the non-calls:

Newton told reporters that only after the game was he asked about his health.

“They asked me questions, but nothing too serious,” Newton said. “I don’t know (what was asked), there’s too much going through my head right now for me to remember what happened.”

The team of course wanted to cover their bases, so Panthers spokesman Steven Drummond said, “The game was never stopped. We never got a call to the sideline and the independent neurologist never alerted us to stop the game.”

The league jumped in, too, explaining that at least the final head blow—which occurred during the game’s climactic final minute—resulted in a remote evaluation of video: “During stoppage in play while on-field officials were in the process of administrating penalties, the unaffiliated neurotrauma consultant and team physician requested video from the spotters and reviewed the play,” NFL spokesperson Brian McCarty said in a statement . “They concluded there were no indications of a concussion that would require further evaluation and the removal of the player from the game.”

"There were no indications of a concussion that would require further evaluation …" pic.twitter.com/hw6VZusk6i

Newton himself said after the game that he felt “shitty” though he said that in the context of having lost the game rather than his physical health. He also didn’t make excuses, telling reporters, “It’s not my job to question the officials” and “It’s not fun getting hit in the head, but we didn’t lose the game off that.” He added, “I try to warn the refs every time I do get hit in the head. But if the flag is not called, then it’s OK.”

The issue is that it’s not really OK at all for Newton to continue being subjected to helmet-to-helmet contact without at least a penalty (there has to be an incentive for the opponent to stop), if not a more thorough neuro-evaluation. The NFL’s new concussion policy—which includes fines and potentially even draft-pick forfeiture for teams not abiding by the rules—just met a key first test, and outwardly the results don’t look great. The league’s statement discussed a play, singular, and this indicated that the other three plays were not similarly analyzed.

Panthers linebacker Thomas Davis was one of the more outspoken teammates rallying in Newton’s defense, telling the Charlotte Observer.

“That’s nothing new. They didn’t do anything different that hasn’t happened all along,” Davis said of the Broncos’ hits on Newton. “It’s just something that the league is going to have to police and they’re going to have to do a better job of and start treating him like the quarterback that he is.

“They look at (Cam’s) size. It’s kind of like the NBA used to allow guys to get away with that against Shaquille O’Neal because of his size. But when you dig deep down into it, they talk about player safety all the time and they need to protect that player as well.”

Shaq didn’t have to contend with nearly 300-pound athletes vaulting themselves at his head for massive helmet-to-helmet collisions. Newtown shouldn’t have to either.