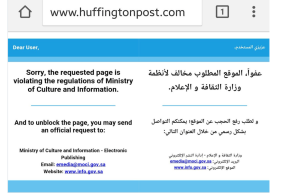 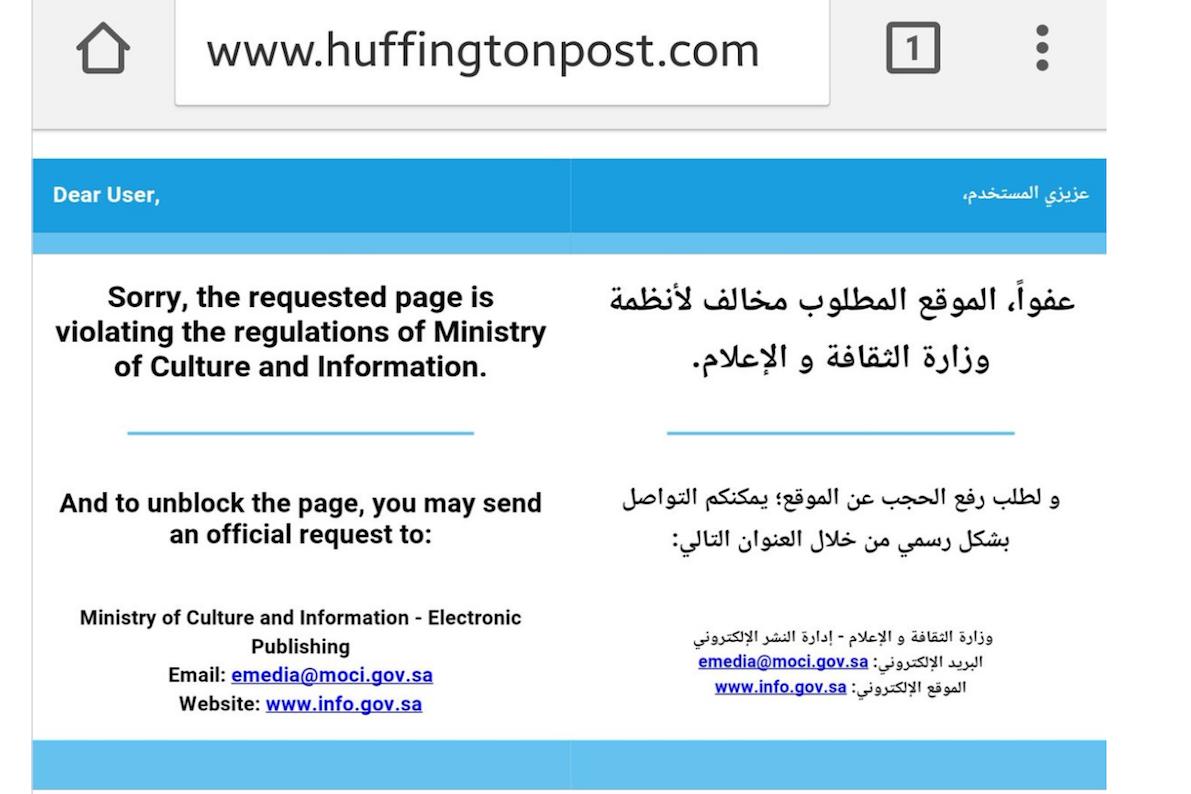 Saudia Arabia blocked internet users from accessing The Huffington Post on Friday just days after it published an unflattering article about the kingdom.

Those who attempted to access the English-language version of the website inside the country were instead directed to a message from the Ministry of Culture and Information that said the page had violated the monarchy’s strict media rules. Saudi social media users began sharing screen grabs of the message on Friday. Among them was Ahmed Al Omran, a Wall Street Journal correspondent based inside the kingdom.

“Sorry, the requested page is violating the regulations of Ministry of Culture and Information,” the message said. Saudi Arabia, which has nearly 20 million internet users, is considered to have some of the most restrictive media freedom laws in the world, according to Reporters Without Borders. In 2015, the Committee To Protect Journalists ranked it the third most censored country in the world behind only North Korea and Eritrea. Vocativ has also reported on Saudi Arabia’s punitive laws regulating speech and online activity.

It remains unclear what prompted the kingdom’s sudden censorship of The Huffington Post, which published an op-ed written by the Saudi ambassador to the U.S. this spring. News sites in the U.S. and Europe routinely publish articles and commentary that are critical of Saudi Arabia’s royal family, military, and record on human rights, with out state-sanctioned reprisal.

The Huffington Post did publish an opinion piece on Sunday that claimed Saudia Arabia was on the brink of “implosion” due to its economic dependence on oil and its failure to implement political reforms. The article, titled “Last Tango in Riyadh,” was written by Hossein Askari, an economist in the U.S. and former special adviser to Saudi Arabia’s Ministry of Finance.

“When it implodes, will the U.S. and the U.K. come to the rescue of their Al-Saud clients? We believe not,” writes Askari. “The U.S. and the others have made thousands of hollow speeches in support of human rights and representative governance, but they have continued to support their client as long as they buy arms and do their bidding.”

Vocativ reached out to the Huffington Post and the Saudi Ministry of Culture and Information for comment. We will update this story if we hear back.