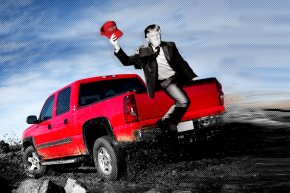 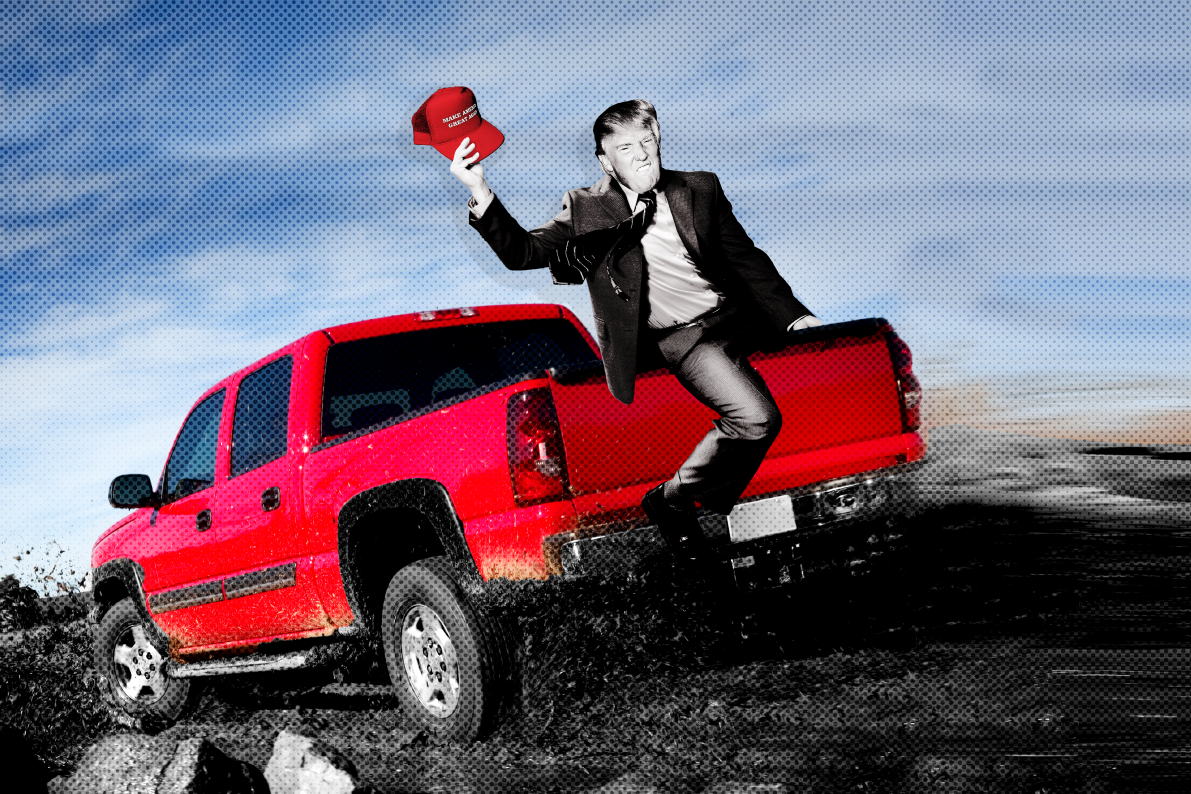 A well-known white supremacist — and enthusiastic Donald Trump supporter — from Oregon has taken his hateful message on the road, outraging his fellow drivers.

Emblazoned with a rising red swastika and a banner reading “Jew Lies Matter,” Jimmy Marr’s Toyota Tacoma pickup raised eyebrows up and down the Pacific Northwest during Labor Day weekend. Drivers from as far north as Washington state’s Mercer Island and as far south as Eugene, Oregon snapped photos of the racist rig, which they then posted across Facebook, Reddit, and Twitter, Vocativ discovered.

In a post published to the Vanguard News Network, a white nationalist website, Marr, an Oregon resident, said the he had driven to a book club meeting affiliated with the Daily Stormer, a notorious alt-right news site run by Andrew Anglin.

“The young man who arranged the meeting was the newest convert to White Nationalism and testified that Donald Trump had been his Red Pill,” Marr wrote in the piece. “He told me that as a result of Internet searches for articles about Trump, he had stumbled across the Daily Stormer, and as a result of researching links there, things quickly spiraled out of the controlled narrative and he found himself and carried away by the flood of truth.”

More The Man Bringing Back the Nazi Movement in America

Several disturbed drivers also made calls to the Oregon State Police to report the sighting, an agency spokesman told Vocativ. “Our hands are tied on stuff like this,” said Captain Bill Fugate. “We believe that this is offensive, but there’s not really a public safety issue.”

On Wednesday, Marr took to Twitter to unveil a new sign on the back of his pickup, one in praise of Donald Trump, the Republican presidential nominee.

Marr has been active in neo-Nazi circles since 2009, according to the Anti Defamation League, which said that he is “best known for sporting a kilt and playing bagpipes while leading racist and anti-Semitic protests around Oregon and the U.S.” In 2014, the White Genocide Project website claimed that Marr was contemplating a run for mayor of Eugene at the time.

“This is a person who has let his views known in various ways,” Marilyn Mayo, a researcher with the Anti Defamation League, told Vocativ. “I think it’s obviously disturbing that he’s riding around in a truck like this. This person will get a lot more exposure on the road.”

Since Trump’s campaign launched last summer, his message has appealed to a far-right sect of neo-Nazis, white supremacists, and anti-Semites. In addition to espousing an aggressively xenophobic and anti-immigrant platform, Trump failed to immediately condemn former KKK leader David Duke’s endorsement and has retweeted messages from white supremacists accounts.

In August, he hired Stephen Bannon — head of the alt-right news site Breitbart — to run his campaign. Soon after, Hillary Clinton gave a high-profile speech in which she said Trump’s campaign is “taking hate groups mainstream.”

Drivers on Oregon’s highways this weekend may have found themselves agreeing.