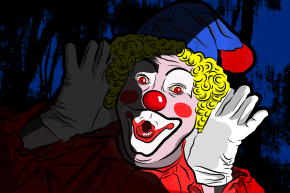 “Phantom Clowns” Have Been Terrorizing The U.S. Since 1981
By Jennings Brown

“Phantom Clowns” Have Been Terrorizing The U.S. Since 1981

A recent spate of creepy clown sightings isn't the first in U.S history 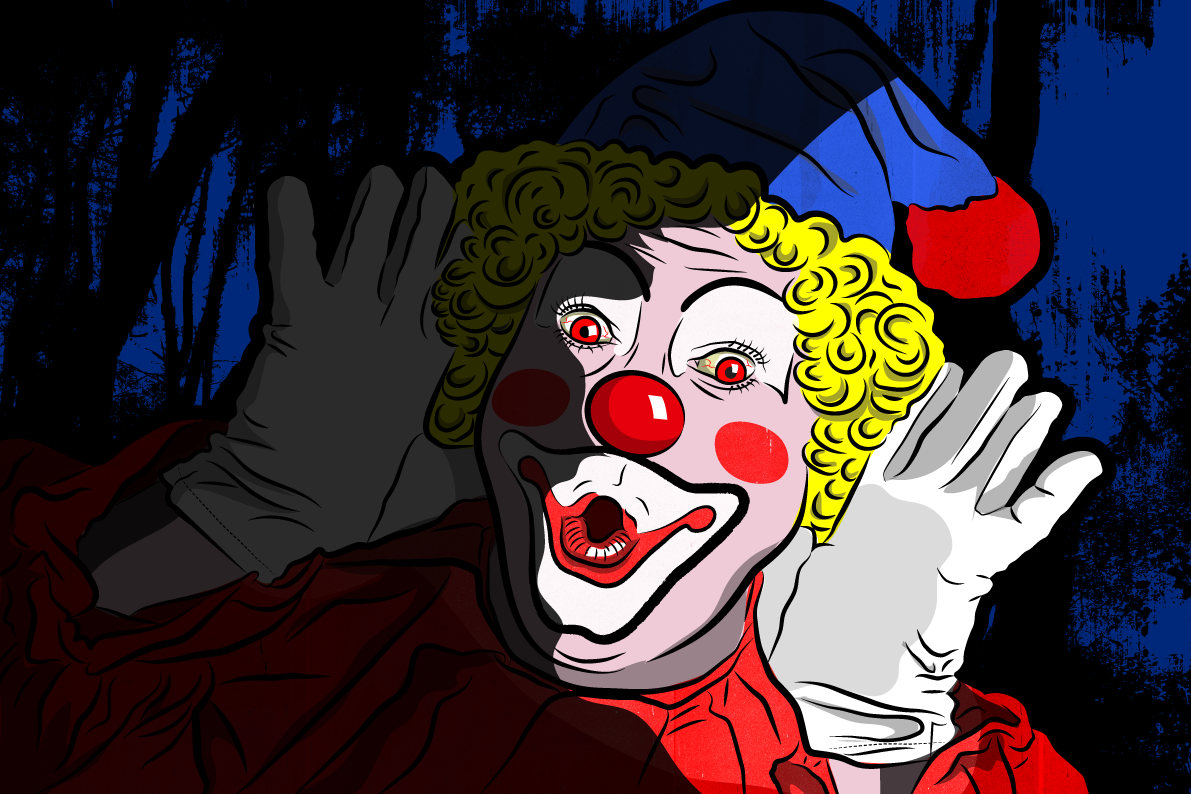 Our collective worst nightmare has come true. Evil clowns are roaming our neighborhoods. They’re wielding machetes. They’re luring our children into the woods. And they’re spreading across the country.

It began in Greenville, South Carolina, at Fleetwood Manor Apartments, a complex nestled against the edge of several acres of woods. On August 21, a police deputy investigated reports of a clown with white face paint trying to lure children into the dark thicket. A resident told him one of her sons had seen many clowns flashing green lights and her other son had heard pounding on the door and the sound of chains clanking. Other children told him that clowns had tried to tempt them with money and that the clowns live in the house by a pond deep in the woods. Another resident said she had seen a clown with a blinking nose near a dumpster at 2:30 a.m. He waved at her.

A week later, a boy at an apartment ten miles away reported seeing a man in a clown mask in the woods near his home. Later that night, a boy at an apartment just three miles from Fleetwood Manor reported seeing another clown. That apartment also sits on the edge of a wooded area. There was another local sighting the next day. The following day, a woman told police she saw a clown standing outside a Greenville laundromat, simply staring at her.

By then, the clowns had begun to mobilize. The previous day, a 14-year-old boy in Columbus, Ohio, said that a man wearing a clown mask chased him with a knife while the boy was walking to his school bus stop. Less than a week later, on September 5, two children in Winston-Salem, North Carolina, claimed a clown was offering candy, as long as they would follow him into the woods. Later that night, a woman in the area claimed that a clown tried to coax her into the woods, except this one was carrying a machete. He wore black gloves and a black tie. The next morning, in the nearby town of Greensboro, a man said he saw a clown in the woods behind his apartment. Yellow polka-dotted shirt, blue pants.

But amid all of these reports, no clowns have been photographed. Police investigators have found no traces of clown activity. Not even a stray red nose or a strand of blue hair.

So what are these insidious creatures? According to one clown expert, they’re probably “phantom clowns.”

Benjamin Radford recently published Bad Clowns, a book that explores coulrophobia — fear of clowns — and  traces the history of threatening costumed jokers, both real and fictionalized. Radford investigates phenomena to determine the true reasons behind the mysterious beasts, aliens, and ghosts. Radford chalks this clown plague up the phantom clown theory, coined by cryptozoologist Loren Coleman in 1981, during a similar wave of clown sightings that haunted Boston.

Most the reports were the same: clowns trying to lure children into vans with candy. Weeks later, the same thing happened in Kansas City — dozens of reports of a murderous clown lurking around elementary schools. Except this clown had a sword or a knife. Soon there were reports from Denver, Omaha, and Pennsylvania. Similar flare-ups have happened in the decades since and they follow the same patterns: the sightings usually occur in the months leading up to Halloween, the reports from each region are similar to each other, and they’re baseless.  “It’s important to understand that there are no reports of any children actually being harmed or abducted by these clowns — despite police searches no evidence was ever found of their existence,” Radford said. “It’s mostly fueled by children sightings, schoolyard rumors, and fearful parent warnings. These are essentially folkloric entities, similar to boogeymen or Slenderman.”

This clown thing is NOT a joke, spread awareness!!!!!! pic.twitter.com/cHWUbgMt0x

These clown contagion episodes seem to have gotten worse in modern times, thanks to social media. In the past, it took weeks for a pack of phantom clowns to make it to a new city. Now it happens in days. “These sorts of creepy clown reports are perfectly suited for going viral — and are specifically intended to do so,” Radford said. “All it takes is a creepy clown image put on social media for the story to make the rounds.”

FAKE: deputies say this viral pic of a clown in the woods was NOT taken near a Cleveland County High School @wsoctv pic.twitter.com/lL4zFdf4bG

Radford says the internet has also created a new type of clown — the stalker clown. These are pranksters who dress up just to freak people out. Some recent examples of stalker clowns were a clown who was filmed lurking and waving in a Chicago cemetery last summer and a teenager who terrified students and neighbors when he repeatedly roamed around the campus of Carroll University in Waukesha, Wisconsin, dressed as a psychotic clown last November.

The original stalker clown was the 2013 “Northampton Clown.” This clown was photographed around the English town holding balloons and quickly became a viral sensation. Eventually the Mirror unmasked the Northampton Clown and revealed that it was a local filmmaker who was also behind the popular “Spot Northampton’s Clown” Facebook page. “The stalker clown is in fact born of the internet and came into existence largely because of social media,” Radford said. “If the original Northampton Clown prankster hadn’t had a platform to exploit and share his stories and photos, he wouldn’t have achieved any notoriety. He’d be an idiot in a clown costume hanging around his hometown park looking lost instead of a viral phenomenon.”

And if this army of menacing clowns aren’t stalker clowns or phantom clowns, should we worry? Radford doesn’t think so. He pointed out that most kids are more likely to run from a clown than towards it and criminals prefer to remain inconspicuous, so it wouldn’t make sense for a murderer to don circus attire.

Besides, there hasn’t been a killer clown incident since John Wayne Gacy used to moonlight as Pogo the Clown in the 1970s. And even he wasn’t crazy enough to wear the costume while he was abducting, torturing, and killing any of his 33 victims.