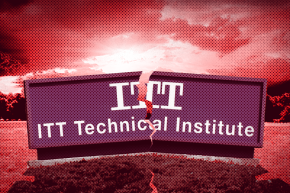 ITT's current students should be able to get their federal aid money back. Alums saddled with thousands in student loans are not so lucky. 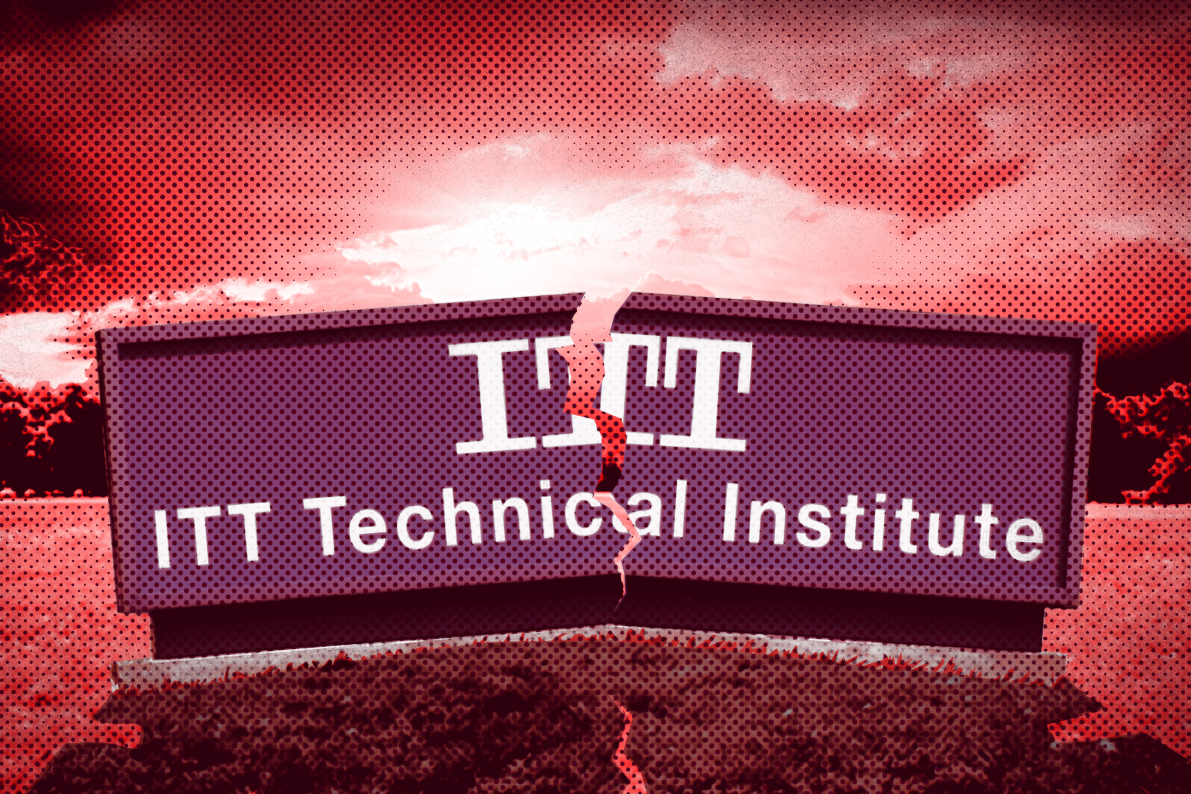 When ITT Technical Institute announced it was closing its doors on Tuesday, Zach Seigel, ITT class of 2008, was thrilled. Not for himself, he says, but for all the people who now won’t be saddled with the same debt and useless degree that he is: $40,000 of student loans he can’t discharge and an associate degree in applied science that he says didn’t lead to any paid work.

Seigel’s story is not unique; in fact, the many dissatisfied and debt-laden former ITT students just like him helped contribute to ITT’s demise. The school suddenly closed all 130 of its schools this week, just as the semester was beginning, leaving approximately 40,000 students and 8,000 employees out of class and out of work. In a statement that placed the blame squarely on the government, ITT said the Department of Education’s “complete disregard” for “due process” left it with no choice but to close.

Two weeks ago, the DOE barred ITT from enrolling new students who were using federal financial aid and required that ITT increase its cash reserves to about $250 million, or 40 percent of the amount of federal student aid it received in 2015. That came after years of increased government scrutiny and allegations like Seigel’s: that the for-profit school was taking in millions from its students — much of it in loans — but giving them little by way of an education or future job prospects in return. Many of those students (12,500 last year, according to Military Times) are military vets using their G.I. Bill money to finance their education.

ITT began in 1969 but is probably best known for its mid-day television ads in the 80s and 90s, targeted to the unemployed (and children home sick from school) and boasting of skills taught that helped its students get better jobs in various fields, usually computer-oriented. The school offered nursing and health science, business, criminal justice, electronics, drafting and design, and information technology programs, with 130 campuses in 38 states.

Seigel enrolled in ITT in 2006, after he wasn’t able to secure loans to continue his education at a non-profit public school.

“My interview with the enrollment person showed facts stating somewhere around 80 percent of graduates enter their field after graduation,” Seigel says. “The same day I was brought before the loan officer and immediately was shown I could find loans through the government. They quickly began the paperwork, with very little explanation of what I was getting into. I was 19 and did not understand the totality of the burden a $40,000 loan would have upon my life.”

Graduating in 2008 in the middle of the recession, Seigel says he interviewed with four employers in his field but couldn’t get anything more than an unpaid internship. He ended up working as a telemarketer — the same job he had while he attended school. He now works for an auto parts manufacturer. It’s not in IT, but it pays the bills.

“I have learned since that for-profit colleges have a massive, lasting affect upon their graduates,” Seigel says. “The cost versus state schools is outrageous. I am thrilled because their closure prevents more folks from ruining their lives.”

Like Seigel, Deshon Davis began attending ITT when he was 19, studying computer electronic engineering, hoping it would lead to a job as a broadcast engineer.

“Halfway through my schooling I realized I wasn’t really getting out what I wanted to get from this program,” Davis says. He earned an Associates degree in 2013 and decided against pursing a Bachelors there. He is $41,000 in debt from ITT, he says, but his degree didn’t help him get a job in his chosen field. He ended up going to another school (and incurring more debt). He’s now working at a local TV station while he pursues a journalism degree.

“It was not worth the money, at all,” Davis says. “Although I met some very nice people that worked at ITT, I did not enjoy my time there. I left feeling like I didn’t learn everything that I should have.”

According to The New York Times, in 2014, ITT had more than 191,000 borrowers with $4.6 billion of debt — about $24,000 per student. In the end, the 40,000 current ITT students may fare better than the hundreds of thousands of alums: If a school closes while a student is enrolled or no more than 120 days after they withdraw (not graduate), they are eligible for a discharge of their federal loans (more information about that here). For alums like Seigel and Davis, there is still a chance they may get their debts discharged, but it’ll be a uphill battle. They’ll have to prove that ITT defrauded them or violated state law to get their loans discharged (more about that process here).

And students who used their GI Bill benefits to pay for their education may well be out of luck. When for-profit Corinthian Colleges closed its doors in 2015, veterans didn’t get their money back and had trouble transferring Corinthian’s credits to another institution. Effectively, their tuition money went to a school that no longer existed for a degree that was no longer available, and paid for credits that couldn’t be used anywhere else. ITT’s current student vets are suddenly facing a semester not just with no school but also no monthly housing allowance. For those who were depending on that money to pay their rent or mortgage while they attended school, that could be a disaster.

Many current and former ITT Tech students met the closure news with hope that their loans might be discharged or fear that they wouldn’t be, and uncertainty of where it would leave them.

ITT Tech is officially closed. I have a chance to have $70k in federal student loan debt forgiven. Seriously, thank you @POTUS

Sooooooo since ITT Tech is shutting down, are my student loans now voided?

So does this mean I don't have to pay my student loans back? I will never be able to afford to #ITT

Over the last two decades (and especially during and immediately after the last recession), ITT and for-profit schools like it grew beyond cheesy TV ads, increasing their enrollment by 225 percent and accounting for 12 percent of all postsecondary students — and $32 billion in federal grants and loans, according to a 2013 report from the National Conference of State Legislatures. In 2012, according to a Brookings study, 74 percent of for-profit students owed more on their loans two years after starting to repay them, a sign that they had stopped payments or paid less than the interest on them (the national average across all post-secondary schools was 57 percent).

With these facts in hand, state and federal governments have begun cracking down on for-profit schools, passing new laws requiring them to educate accepted students on financial aid options or tying the amount of state aid offered to an institution’s students to its loan default and graduation rates — which tend to be higher and lower, respectively, at for-profit schools. At the federal level, the Obama administration has cracked down on for-profit schools, including sanctions against Corinthian and ITT that resulted in the schools shutting down and a $13 million settlement with Education Affiliates after the Department of Justice accused it of falsifying information on student federal grant applications. Earlier this year, the Federal Trade Commission sued DeVry University, accusing the school of deceitful ads, including a claim that 90 percent of its students got jobs in their career field within six months of graduation.

Like Seigel says, closing predatory for-profit schools will save the people who would have enrolled in them and wasted their money. And current students should be able to get some, if not all (depending on how much of their education was financed by federal loans) of their money back. But there will be no way to pay back the time wasted at ITT, and hundreds of thousands of its alums are still stuck paying their debts back for decades to come.