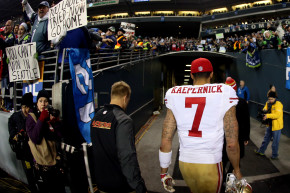 As with everything else, social media is making jersey burning a viral pathway for the attention-starved 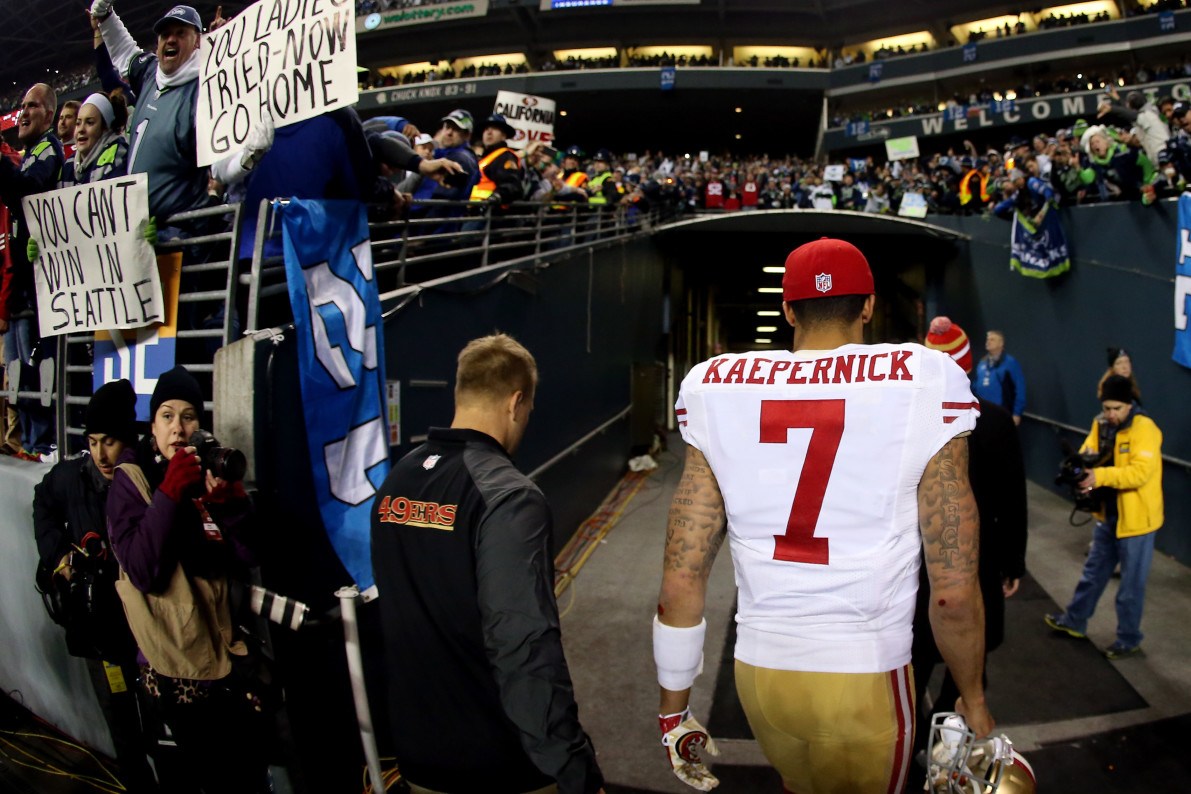 On Friday, San Francisco 49ers possible backup quarterback Colin Kaepernick took a seat while the National Anthem was sung before a game against the Green Bay Packers, an act of protest he would explain the following morning to NFL Media’s Steve Wyche.

“I am not going to stand up to show pride in a flag for a country that oppresses black people and people of color,” he said. “To me, this is bigger than football, and it would be selfish on my part to look the other way. There are bodies in the street and people getting paid leave and getting away with murder.”

For their part, the Niners reaffirmed their undying love of both country and flag, while still affording Kaepernick space to express his political beliefs.

“The National Anthem is and always will be a special part of the pre-game ceremony. It is an opportunity to honor our country and reflect on the great liberties we are afforded as its citizens,” the team said in a statement. “In respecting such American principles as freedom of religion and freedom of expression, we recognize the right of an individual to choose and participate, or not, in our celebration of the national anthem.”

In a 20 minute-long, extended conversation with reporters on Sunday, Kaepernick further unpacked his reasoning, saying that he hoped to provide a megaphone for those who lack as grand a stage as he, restated that this was worth whatever financial losses he might suffer, made sure that his anti-anthem stance should in no way be taken as an attempt to disparage the troops, hammered both Hillary Clinton and Donald Trump, and was repeatedly queried as to whether he himself feels “oppressed,”

“Ultimately it’s to bring awareness and make people realize what’s really going on in this country,” Kaepernick said. “There are a lot of things that are going on that are unjust, people aren’t being held accountable for, that’s something that needs to change.

“This country stands for liberty, freedom, justice for all. And it’s not happening ‘for all’ right now.”

Naturally, fans responded to the nuanced ideas Kaepernick explored with an equally well thought out, Oxbridge Debate Society-level respo… Hahahahaha. Just fooling. Many a beefy Caucasian decided that the only proper course of action was to set his number seven Niners jersey aflame, because that’ll show him what’s what.

The man in the above video seems to take no joy in having to burn his Kaepernick jersey. He lowers the jersey into a barbecue pit with a somber eulogy: “I went to school with Kaepernick. I thought he was a cool dude. Not anymore, bud.”

Other burnings were more gleeful. The following video features a boy of about 10 and presumably his father. “Colin Kaepernick, you suck and you disappointed me today,” the boy says with a smile before he and the man use a make-shift blow torch to practically disintegrate the jersey.

And just in case you thought jersey burnings were the acts of an angry few, YouTube user Francesca Moore put together a 10-minute compilation. The third video features a man who identifies himself as a veteran, and he is none too pleased about Kaepernick’s stand: “I bought your military jersey at the end of the game two years ago when my dad was dying of cancer. I came home and bought this jersey because I was proud it was a military jersey by Colin Kaepernick. Today, sir, you lose the right to wear this jersey. No one should ever wear a jersey with your name on it again.”

But firing up the ol’ phone cam, shooting a wobbly video, and getting that sucker live on your preferred social media outlet whenever a beloved athlete leaves town or royally copulates with a canine is very much A Thing in the year of our lord 2016.

Sure, this act of tribal shunning had taken place long before we all started dumping the totality of our lives online, but patient zero in its ubiquity is definitely LeBron James. His 2010 decision, or rather The Decision, to bolt Cleveland for the Miami Heat was met not just with howls of anguished rage and bile-soaked cries, but shots of smoldering embers of James’ Cavs uniform surrounded by wild-eyed former devotees that were blasted out by ESPN and a score of other outlets.

Now, given how easy it is to create your very own viral video #content, the practice is practically de rigeur. While it doesn’t take much of a slight on the part of an athlete to incur a fan base’s fiery wrath, the greatest act of betrayal centers on free agency.

Kevin Durant joined up with the 73-win Golden State Warriors and, boom, he got (literally) roasted, as did Dwyane Wade, after he returned to his hometown Chicago Bulls. The same holds true for DeMarco Murray, Dwight Howard, LaMarcus Aldridge, Jayson Hayward, Andre Johnson, Ndamukong Suh, and Julius Peppers. (If you’re in a link-clicking mood and are pressed for time, Vocativ highly recommends checking out the Peppers vid, tastefully scored with Metallica’s “Seek & Destroy” and titled “”Pepper’s Must Burn!” [sic])

When DeSean Jackson returned to Philadelphia, though he didn’t depart of his own accord, his old green togs were torched. Sometimes, all it takes is a lousy performance to spur a burning in effigy. Just ask Mark Sanchez, Eli Manning, Jay Cutler, Matt Schaub, Matt Stafford, Johnny Manziel, and yes, Colin Kaepernick.

Team leaves town in a sketchy, patently money-grabbing manner, a player shows up for his own retirement ceremony, and/or is traded for no good reason whatsoever? Yep, it’s gasoline-soaking time. It’s become such a common occurrence that fans will now mock burn a jersey while screwing on their best imitation of legitimate anger, just to soak up all those sweet, sweet likes and RTs.

But no, it’s not like the madding crowd’s loathing of players is reaching a fever pitch. It’s performative. And it’s not likely to stop any time soon.