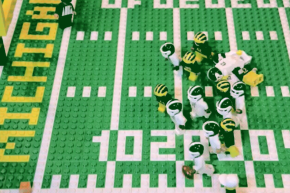 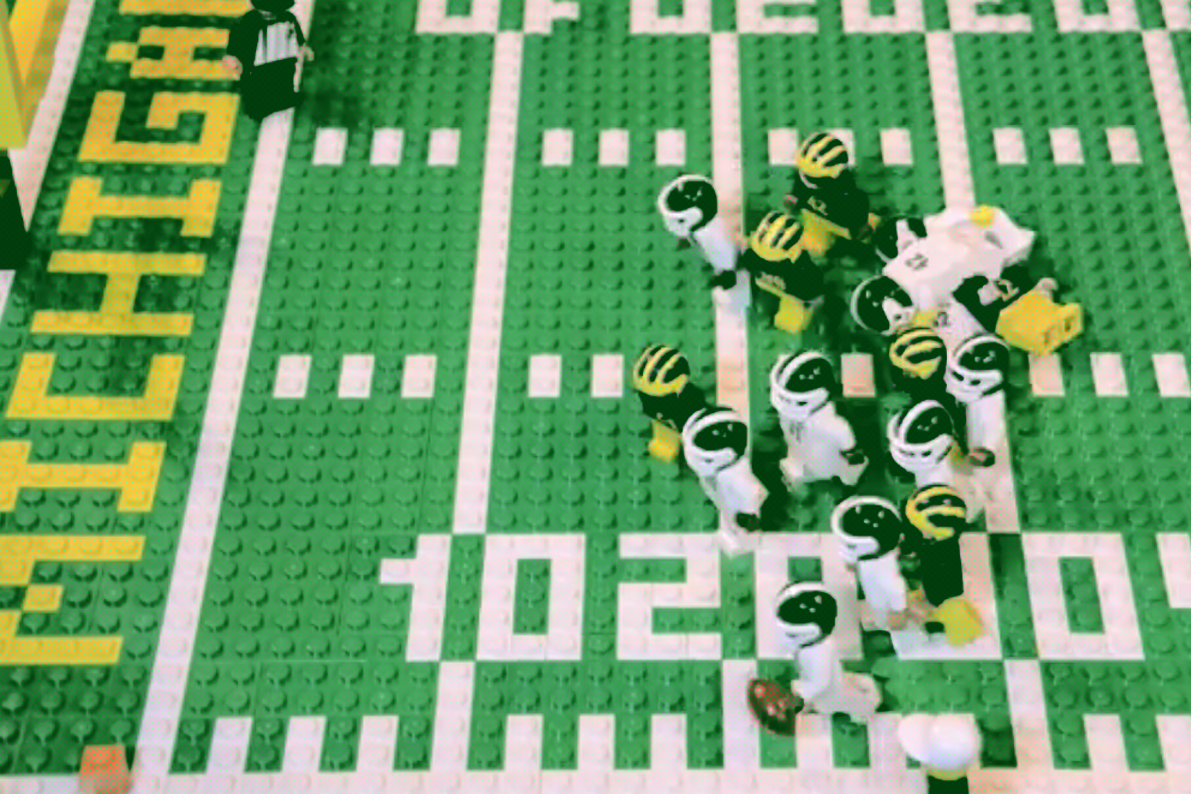 Michigan State wouldn’t have been Big Ten football champions last year if not for Michigan punter Blake O’Neill’s ill-fated fumble, which was returned for a last-gasp victory. The final 10 seconds of that game have been memorialized in memory banks, highlight reels, a new book, and, now, even in a nontraditional medium: Legos.

One of the most memorable moments from College Football. I can’t wait for this season to start.

It’s perfect in every last detail from fan expressions to Jim Harbaugh’s khakis and scowl. And it’s all the handiwork of Boise resident Jared Jacobs, 38, who has a startling admission to make: “I didn’t have a lot of Lego growing up as a kid. I probably had a little bucket full of them I could play with. I didn’t play with Lego a ton.”

Instead, his passion leans more toward film and creativity in general. Jacobs does marketing for Franklin Building Supply, producing videos and using social media. A few years ago, he started dabbling in stop-animation shorts as a hobby, and Lego was the perfect medium.

“I like making things that entertain and make people laugh and resonate well with people,” Jacobs said. “I’ve just always been that way.”

Jacobs, a married father of three, began using the iMotion app on his phone, staging all manner of amusing shorts, from Bob Ross painting to King Pin scenes to a fictitious brawl between Tom Brady and Richard Sherman. He began specializing in staging Breaking Bad re-creations such as this one of a climactic scene that caught the attention of a supporting actor from the show, Daniel Moncada, who began sharing the clips. (Incidentally, there’s a photo on Jacobs’ Instagram with Breaking Bad co-star and Idaho native Aaron Paul; though they have mutual friends, that selfie was the result of a random encounter.)

This scene is what I like to call The Last Supper of Breaking Bad. Most of life’s biggest epiphanies have come while sitting on the toilet. I miss this show. #BreakingBad #Stopmotion #goldyeller A video posted by Jared Jacobs (@goldyeller) on Jan 6, 2016 at 7:58pm PST

Though he lives in Idaho now, Jacobs grew up in Calgary and developed an affinity for Canadian golfer Graham DaLaet, who also attended nearby Boise State. Jacobs staged a re-creation of an impressive hole he had played, posting it to Instagram and Twitter where the golfer himself, his caddie, and a few other PGA and LPGA players all retweeted him.

Now I can check golfing with #GrahamDeLaet off the ol’ bucket list. #goldyeller

Encouraged by the response, Jacobs returned to work quickly re-enacting Tiger Woods’ famed chip on the 16th hole of the 2005 Masters.

In your life have you seen anything like that? #TigerWoods #VerneLundquist #PGA A video posted by Jared Jacobs (@goldyeller) on May 10, 2016 at 7:03am PDT

“That went crazy viral,” Jacobs said of a video that ESPN circulated on its 4.8-million follower account, prompting calls from the Pinehurst Resort and the Big Ten Network. “Once that kind of interest started coming in, I knew that I needed to step my game up. That’s when I went out and purchased actual, professional animating software.”

Production has gotten more “intense,” he said, with the new program and a DSLR camera. That equipment and the sudden monetization have helped him handle bigger projects and make the time to do them, widening his lens to include more characters and more details. Here’s his take on the “Mangum Miracle,” BYU’s Hail Mary pass from Tanner Mangum to beat Nebraska.

Starting this fall, Jacobs will be making weekly videos for the Big Ten Network’s Saturday pregame show, BTN Tailgate, using Oyo Sports collectibles (a Lego competitor with a wider variety of football accessories). He said his children—aged 4, 8, and 10—aren’t sports fans and think his success is cool, but it’s not a regular topic of conversation.

“I don’t want to scar them so they never want to play with Lego again,” Jacobs said.