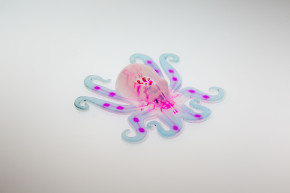 This Squishy Robot Octopus Is Changing Robotics
By Joshua A. Krisch 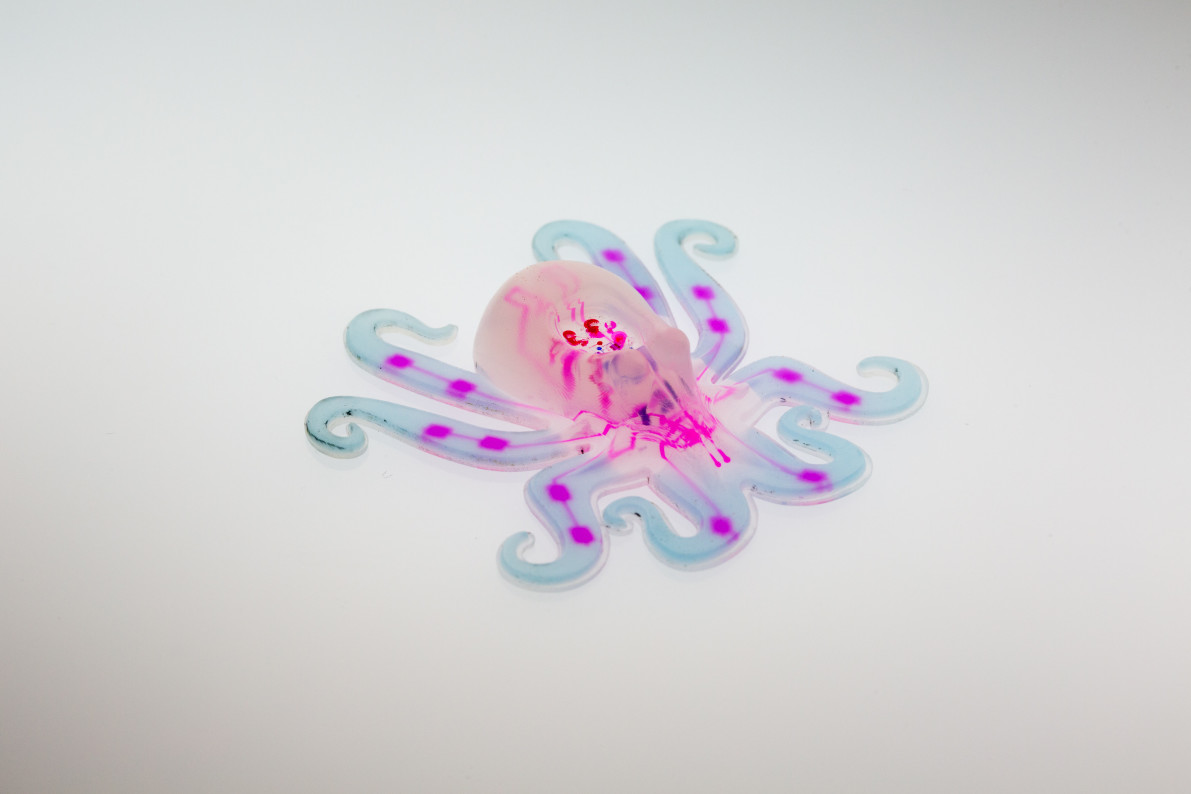 Science fiction has spoiled us. When we think of robots, we’re likely to imagine solid, hulking masses like R2D2, the Transformers, or Cylons. But leading roboticists paint a more malleable picture — soft robots that can squeeze into tight spaces and lift heavy objects without endangering nearby humans. Now, in a new study in the journal Nature, Robot J. Wood and his team of roboticists at Harvard University have taken an unprecedented leap toward this squishy future.

“One long-standing vision for the field of soft robotics has been to create robots that are entirely soft,” said Wood, in a press statement. “But the struggle has always been in replacing rigid components like batteries and electronic controls with analogous soft systems and then putting it all together. This research demonstrates that we can easily manufacture the key components of a simple, entirely soft robot, which lays the foundation for more complex designs.”

There’s a reason why most modern robots remain woefully clunky — with hard parts, engineers can fall back on relatively simple math to program and predict how the bot will move. But hard robots can be costly — and dangerous. One of the most sophisticated robots in history, the $4 billion Mars Spirit rover, ended its mission stuck in a sand trap that a soft robot likely could have cleared. And robotic arms are often cordoned away from human workers on assembly lines, to prevent injuries.

With robots already beginning to take a diverse array of more active roles in our lives, the hard robot model may well have run its course. “We’re starting to talk about bringing robots into our everyday lives, so safety is a primary concern,” Andrew Marchese of MIT, creator of a pseudo-soft robotic fish in 2014, told Popular Mechanics. As is utility. “For pipe inspection, which involves complicated turns and twists, a soft robot could really leverage its body compliance,” Marchese added.

Here’s the problem. Autonomous robots — soft or otherwise — still need batteries and circuit boards and, while it’s relatively easy to craft a soft robotic body, softening up the internal hardware is tricky business. Until now, engineers have circumvented this problem by either creating mostly soft robots (with squishy bodies and rigid onboard computers, like Marchese’s fish) or by tethering their soft creations to external computers and power sources (rendering “autonomous” a term used loosely).

But in this new study, Wood and his team describe the first truly soft, autonomous robot. The secret to their success is that the octobot is pneumatic — that is, it is powered by gas under pressure, produced by a chemical reaction inside the robot that runs off a small amount of liquid fuel. “Fuel sources for soft robots have always relied on some type of rigid components,” said coauthor Michael Wehner, also of Harvard University, in a statement. “A simple reaction between the chemical and a catalyst — in this case platinum—allows us to replace rigid power sources.” As for the problem of rigid circuitry, the team made use of the microfluidic logic circuits popularized by George Whitesides (soft robotics luminary at Harvard, famous for the soft robotic gripper). The soft circuitry can autonomously control when the chemical reaction activates, propelling the octobot forward.

For Wood and his colleagues, the octobot was less a functional robot than it was a test drive for fully soft robots (not that we don’t desperately need tiny autonomous octopuses in our lives). But now that this final hurdle to 100 percent soft robots has been cleared, the possibilities are staggering. Untethered soft robots that can wriggle over rubble for search-and-rescue missions; robotic surgical tools that are soft enough to minimize trauma; assembly-lines where humans and robots can work side-by-side without fear of falling metal; a rover that doesn’t get trapped on Mars.

“This research is a proof of concept,” said coauthor Ryan Truby, also of Harvard University, in a statement. “We hope that our approach for creating autonomous soft robots inspires roboticists, material scientists, and researchers focused on advanced manufacturing.”