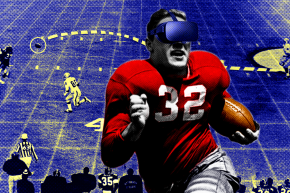 Battlefield To Playing Field: How Virtual Reality Took Over Sports
By Joe Lemire

Battlefield To Playing Field: How Virtual Reality Took Over Sports 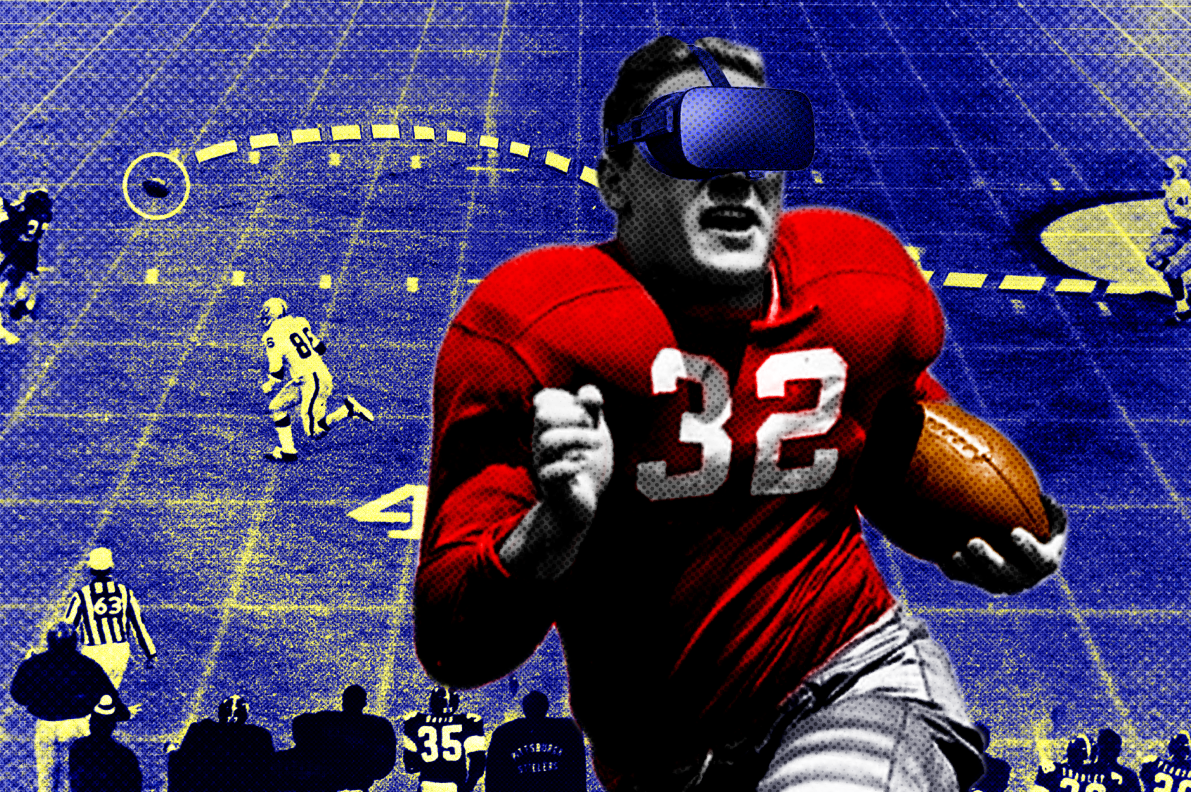 Brendan Reilly was chatting with his fellow assistant coaches and support staff in the Illinois State men’s basketball program when the conversation turned toward his athletic shortcomings as a practice squad fill-in.

“The impetus was, they were making fun of me as a scout-team point guard,” Reilly said. “They were like, ‘You’re 5’9”, slow, and you can’t shoot. Why are we preparing for our competition against you?’

He figured they were right—and wondered if he could just replace stand-ins like himself with something digital. “I remember thinking, the holy grail would be if the guys played a video game on the court,” he said.

After that 2009 conversation, Reilly began using lunch breaks and spare moments to cold-call hundreds of software technology firms in or on the periphery of the virtual reality space. That led to a pairing with EON Reality, which hired him in 2011 and began incubating his idea for a sports application of VR. EON specializes in education and training, creating systemic methods of knowledge transfer in the aerospace, energy, and medical industries, among others.

What was once the domain of the military and airline industries through battlefield recreations and flight simulators is now expanding rapidly into sports.

“I think we’re off the honeymoon phase of virtual reality,” Reilly said. “We’re in the what-can-this-really-do-for-me phase.”

The concepts of VR have been in practice for decades but, as STRIVR founder and CEO Derek Belch said, the necessary infrastructure used to be cost-prohibitive and “goofy in a lot of ways.” The experience is now more legitimate. “I would even contend that it still has a long way to go,” Belch, a former Stanford kicker and graduate assistant coach, “but it’s ready to go to at least give a nice sample of something effective and where we can go in the future.”

Staring in the 1960s, the armed forces began heavy research and development in what became the seeds of virtual reality, according to Corey Mead’s book, War Play: Video Games and the Future of Armed Conflict. “For decades the military took the lead in financing, sponsoring, and inventing the specific technology used in video games, while game companies were the happy beneficiaries,” Mead wrote. “The entire game industry rests on a technological foundation established by large amounts of military-funded research and infrastructure, including advanced computing systems, computer graphics, and the Internet.”

The capacity of that VR technology has been augmented to include recruiting, training, and treating soldiers with PTSD. STRIVR co-founder and Stanford professor Jeremy Bailenson consults for, among other entities, the Army, Air Force, and Department of Defense. Back in 1994, the Associated Press wrote about a military VR experience—the words “virtual reality” were in quotes—that required six projectors to fill up a four-story screen. The technology now is far more portable, via Oculus headsets and even accessible on some smartphones.

“Display technology in all its guises plays a huge role within the defence industry,” Henry White, the UK Sport Partnership Lead at BAE Systems, wrote in an email. “. . . In particular the training of maintenance engineers can be greatly enhanced by this technology so that they can be as ready as possible to maintain a new platform as soon as it becomes available. It is this type of technology which lends itself well to the cross over into sport’s training.”

The principal source of R&D funding has shifted, White said, from the military to the gaming industry (which, as Mead noted, is ironic given that the armed forces bequeathed the infrastructure to Esports in the first place). It is no surprise that Belch said younger players tend to acclimate and utilize VR technology more quickly, a sentiment shared by Dartmouth football coach Buddy Teevens, who began using STRIVR last year. Video games are ubiquitous; VR is essentially an immersive version of what college athletes do in their free time.

“It really resonates with guys because that’s their world,” Teevens said. “It’s a Pokémon Go type of culture.”

The sudden summer emergence of Pokémon Go has been a particular boon for the industry. Reilly said he had been trying, with mixed results, to explain EON’s augmented (or mixed) reality systems for five years—a concept that is more easily understood thanks to Ashachu and company. “We love the makers of Pokémon Go,” Reilly said.

“High quality systems such as advanced fighter pilot helmet displays are pushing this Mixed Reality technology but this will feed through to more affordable systems,” White wrote. “Thus it will be possible to have critical training data appropriately combined with real world 3D images tailored to the individual elite athlete’s needs. The athletes will still have to do the hard part though!”

What virtual reality can do is make game preparation simultaneously more rigorous and less grueling by increasing repetitions but saving energy and stress. Teevens’ quarterback will often use STRIVR in his dorm room before bed each night.

“That’s going to help him—his learning curve, his comfort level, and from a competitive standpoint, his reaction time,” he said. “He’s been through it hundreds, maybe thousands, of times visually, and now he gets out and is going to react a little bit more naturally on the field.”

More Can You Buy Fixed Soccer Match Results On The Dark Net?

Teevens is serious about reducing wear and tear, having eliminated tackling in practice back in 2010. Players work on form by wrapping up the MVP, Dartmouth’s Mobile Virtual Player, a remote-controlled tackling dummy on wheels, or through the STRIVR system. Teevens said his team’s missed-tackle rate has actually declined 50 percent because they actually work on technique more than they used to because it’s safer.

“The last two spring practices, we haven’t had any [concussions],” Teevens said. “Spring practice is what I consider ‘concussion season.’ If you look at statistics nationally, that’s when most of them at the college level occur. The peripheral reduction has been huge as well—necks, shoulders, backs, arms—just because collision with another human being has essentially been eliminated.”

Belch is quick to caution that virtual reality should not be mistaken for a concussion prevention system but gave an example of an injured player not hastening his return to the field thanks to VR. When Stanford quarterback Kevin Hogan couldn’t practice because of an ankle injury last fall, he took his weekly practice reps in the STRIVR system.

“Football, I think, is the perfect game [for VR] because it’s so physically intense, and guys just don’t practice every day during the season,” Belch said. “Anything they can do to gain an edge and stay mentally sharp, in addition to physically sharp, they’re open to it.”

Many early adopters of the technology correspond regularly, forming a collective groupthink to crowdsource new ideas and approaches to the technology. Reilly described receiving an early VR tutorial in which he could interact with the avatar of a energy technician—who was actually thousands of miles away in the Middle East—and manipulate virtual valves. That’s type of experience can easily be transposed to sports, with instructors able to coach remotely.

Unfortunately for Reilly, on a personal level, virtual reality has exposed another weakness in his sporting repertoire—only this one is shared by most big league hitters. He has taken a few cuts in the VR batter’s box against Los Angeles Dodgers ace Clayton Kershaw.

“I have yet to hit him,” Reilly said with a laugh. “He has quite the curve ball. It’s really hard.”