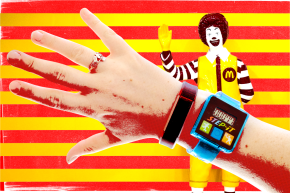 Because what kid doesn't want to have a vague idea of how many steps he or she has taken instead of a stuffed unicorn or whatever they're giving away these days? 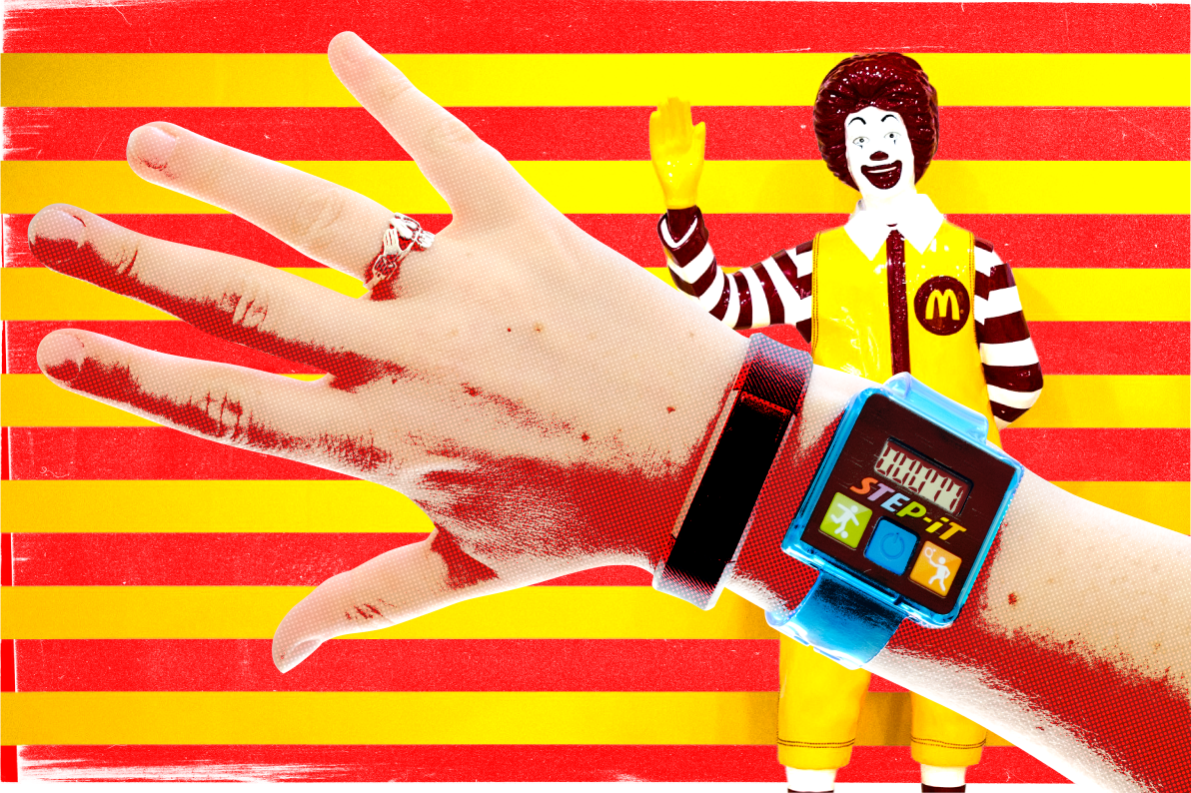 Last week, McDonald’s began giving away free “Step-iT” trackers as Happy Meal toys, for the health-conscious kids who want to get an early start on the Internet of Things lifestyle.

As the owner of a FitBit Alta, I wondered if a toy from a $3.39 Happy Meal was as good as the sophisticated fitness tracker I had recently purchased for $119.99 (plus tax) from a local Best Buy. To be extra scientific, I decided to see how both trackers compare to the health application on my iPhone that also tracks steps and which I might as well make use of at some point because it is un-deletable.

I went to the McDonald’s near (but not the one inside) New York’s Penn Station on Wednesday and got a cheeseburger Happy Meal, making sure there was an activity tracker inside. (I also chose the apple slices option instead of the Go-GURT.) Back at the office, I was disappointed to discover that I had been given the wrong tracker. McDonald’s actually has two types: one that counts steps and is good, and one that supposedly just lights up when you are active, which makes no sense (and also, if mine was anything to go by, doesn’t work).

Luckily, a co-worker went to a different McDonald’s (the fancy one in Macy’s) and got a Happy Meal (chicken nuggets, Go-GURT) with the correct tracker. It was time for the test!

I walked 10 New York City blocks (about a half mile) south and then ran 10 blocks north, to see if the trackers lost their accuracy at different speeds. I counted the steps during the walking portion, so I could have a real number against which to test the trackers. (Or at least a close-to-accurate number. Keep in mind I was doing this in a section of New York where the sidewalks are so crowded that the New York Times actually wrote an article about it—so I had to dodge tourists and luggage with some odd leaps and half steps. I was also wearing work clothes and shoes.)

As you can see, the McDonald’s tracker was the least accurate of the three, which makes sense since it was by far the cheapest. (It also continued to counting steps when I forgot to take it off and sat down to type this article.) Surprisingly, my beloved FitBit Alta sucks, too, and was nearly 300 steps off the real walking count. The iPhone, on the other hand, was almost perfect.

I didn’t keep track of running steps because it was hot outside and I was uncomfortable. So there’s no “real” count to compare it to but the results from the devices were similar to the walk: The iPhone had the most, with 938, FitBit had 860 (bringing it closer to iPhone than it was for the walking test), and the McDonald’s one was 400, which was even further off the others than it was for the walk test.

I also tested Pokémon Go’s egg hatcher distance tracker (which counts distance in kilometers rather than steps taken), both because I wanted to see if it was even close to accurate and also because as long as I was out there I might as well hatch some eggs. During the walk, the game said I traveled 0.82 km, which translates to about half a mile. For the run, it was 0.74, or about just less than half a mile. Which means it is actually pretty accurate! I was also able to hatch a Gastly, which isn’t that exciting in and of itself except it was accompanied by enough Gastly candies to evolve my Haunter into a Gengar, a new monster in my Pokédex. So that was pretty cool.

Just carry your iPhone everywhere you go, I guess? As for the McDonald’s Step-iT tracker, well, I would say it’s worth the $3.39 (plus tax) but my Happy Meal had 430 calories, only about 85 of which I burned while testing it for accuracy.

Well, McDonald’s has recalled the Step-iTs due to “limited reports of potential skin irritations that may be associated from wearing the band,” the company said in a statement shortly after this article was published. So I guess now I have myself a little collector’s item.