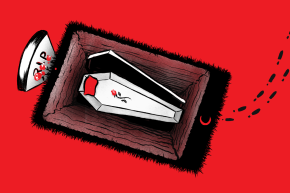 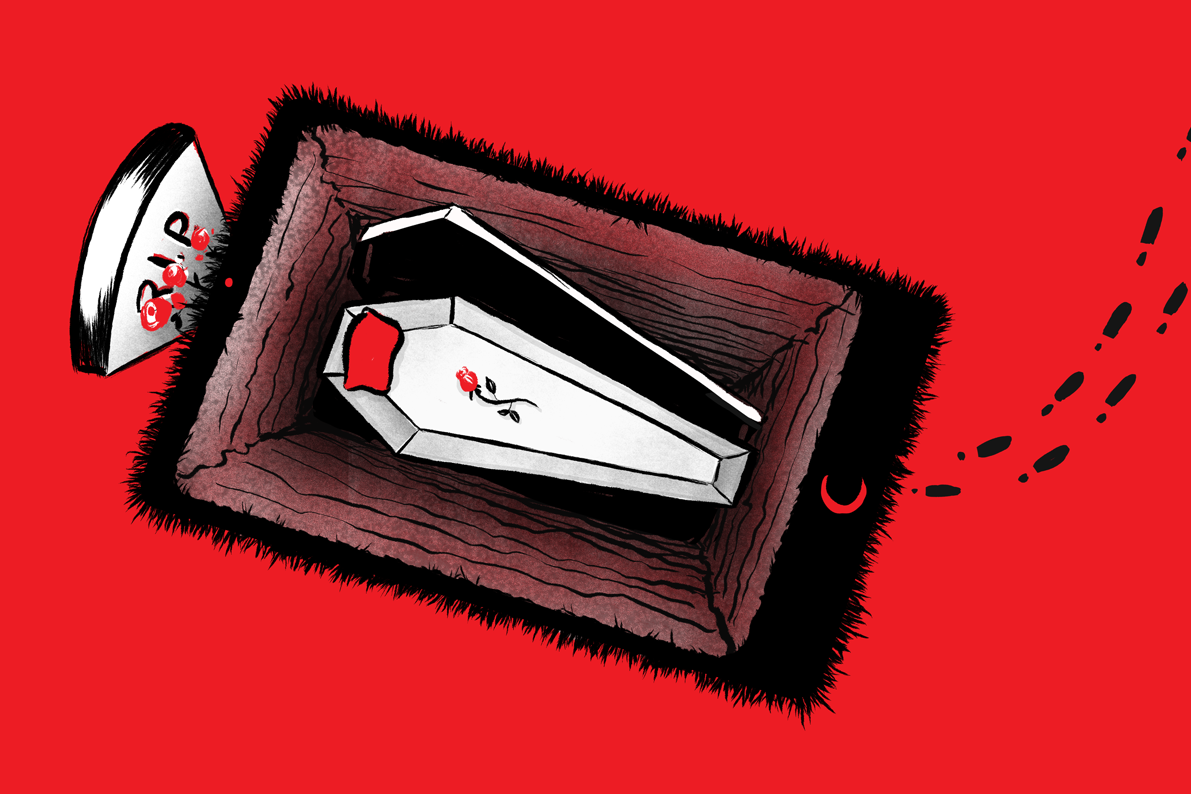 If you’ve ever thought about faking your death or disappearing, Elizabeth Greenwood’s recently released book “Playing Dead” is worth a read. Serving as part-history and part-guide to the world of pseudocide (aka faking one’s death), “Playing Dead” peels back the layers behind the promise of anonymity and a new life only to discover the near impossibility of it all.

Greenwood, a creative writing teacher at Columbia University, was inspired by her own obsession with going off the grid after finding herself staring down six figures of student loans she couldn’t imagine ever paying off. And while this obsession led her to the Philippines where she was able to secure a fake death certificate, she stopped short of actually putting it to use. Pseudocide may conjure up images of a secretive and romantic late night escape to a far-flung country where you’d live undetected, but what Greenwood learned is that truly faking dead is a logistical nightmare, often hampered by now-ubiquitous technology.

One of the most interesting areas of focus in the book surrounds the anxiety of trying to disappear in the digital world, which gives us a false sense of anonymity while simultaneously providing some of the easiest breadcrumbs to those looking. It’s also an idea that’s been explored before. In 2009, Wired writer Evan Ratliff (who Greenwood interviews in “Playing Dead”) attempted to vanish simply to see if readers could locate him (they did). His work, alongside Greenwood’s, proves that while it seems easier than ever to score a false identity and schedule a getaway, the internet is as much our escape as it is our digital prison.

One of Greenwood’s key resources throughout the book is Frank Ahearn, a former skip tracer turned privacy consultant who once charged $30,000 a case to help people disappear, and Steve Rambam, an insurance fraud death investigator who is among an elite few skilled enough to track faked deaths (aka pseudocides) and insurance fraudsters around the globe. Both disavow her notions by showing her the excruciating tedium of how faking your death is done, but also by revealing the many common pitfalls that mess the whole thing up.

Greenwood spoke with Vocativ by phone about how difficult it is these days to disappear and stay gone.

So do you think it’s easier or harder to disappear now because of technology?

The privacy consultant I interview in the book, Frank Ahearn, in the first chapter—he’s insistent that technology actually helps people disappear in certain ways. The example he gave me is that if you’re plotting where your next life is going to take place, back in the 1970s you would have to call up TWA and ask for their flight schedule to Belize, and then go to the airport and buy a ticket. And then contact a real estate broker by mail and send away for a catalog. Whereas now, if you wanted to up and relocate to Belize, you can have that all done in a matter of hours online. Just the convenience alone.

But then it’s a matter of staying gone.
I think the biggest question with this stuff is always who is looking for you, and why, and what are your motivations for faking death or disappearing. If you’re committing an attendant crime [in conjunction with disappearing], like life insurance fraud, or trying to get out of a prison sentence, there will be a lot of people looking for you and monitoring your moves, your email, your mom to call her on her birthday. So, if you’re a regular person with no outstanding warrants or debts you kind of have a better shot.

But does that person with no debt and no real familial connections who just wants to disappear even exist?
That’s a great question. The inherent paradox with the successful fake death is that we never know how many people have really pulled it off. I hope there are people out there who have really pulled it off, who were just disenchanted with their lives and just shrugged off.

And in my research for the book I was always hoping to find your average Joe who really just wanted a second shot. I never found him sadly, most of the people were two bit conmen and life insurance fraudsters. The motivations for women are usually different, they want to escape a violent partner. And I think those people have more incentive to really stay gone rather than the average person pulling off life insurance fraud.

It seems like one big pro to the internet with disappearing is you can use it for misdirection.
Frank [Ahearn] calls that creating disinformation. He creates false leads, like having someone run a credit report suggesting that you’re looking for apartments in Chicago, when really you’re doing so through an anonymous LLC in Oregon. It’s really manipulating the digital footprint.

What else makes it easier?
Well, beyond these kinds of conveniences, anything that promises to make you anonymous online and is foolproof is obsolete within moments. Avoiding the internet is probably the way to go. You don’t have to have a smartphone; you don’t have to be online.

But it seems like a lot people can’t stay away from it.
People have done stupid things like Googling themselves. Like Patrick McDermott staged a drowning. McDermott was pretty high profile, he dated Olivia Newton-John, he had years of back child support due. Investigators found him because he’d been logging onto a site dedicated to finding him and they just followed the trail directly to where he was. The impulse that we can use the internet to keep tabs on ourselves or outwit law enforcement is kind of misguided.

There was the guy who’d been emailing his plan to fake his death with his family, and deleted the emails from his inbox, but forgot to clean out his sent mail.
Yeah, Raymond Roth was trying to commit life insurance fraud [with his son in 2012], and staging a drowning, too. These are not criminal masterminds. He thought he’d deleted all traces [of scheming] but he forgot about that sent box. Wow, bummer.

The technology question is a big question; it’s what everyone wants to know about disappearing. Disappearing seems more impossible now than ever, because of the way we live, because of the NSA, because we have surrendered all our privacy willingly by having smartphones in our pockets that transmit wherever we are. We’re checking in on Foursquare. We’ve given it all away, which is why I think disappearing seems all that more compelling and romantic to most of us.

In your book, you found that a lot of the death fraud industry is in the Phillipines, but the process there for faking your death seems so old school—a fake body, fake mourning, fake documents. No real technology involved.
It is very old school. There are supposedly deep web marketplaces for this stuff. There was a guy I didn’t include the the book, but he obtained his death certificate online either through a site out of the UK called Confidential Access, or Silk Road. But that site was busted a few years ago, I believe in 2012. So to the extent that there is even a thriving secret black market online, I’m just not sure.

And in the end the people who pull this off aren’t really using technology.
Use technology to get gone, but then stay as far away from it as you can. Take John Darwin, the Canoe Man. He staged his death [by kayaking accident in London in 2002] successfully for six years. The secret to his success was that he had a great disguise. We think about what identity means in the 21st century, we piece it together with these meta definitions, but Darwin told me, ‘no, the secret is grow a beard and look different.’ It’s cartoonish — it’s not the first thing we think about when disappearing — but getting a good disguise in London where they have more CCTV cameras than anywhere was essential.

So everyone still leaves a trail one way or another.
Absolutely. In 2010, Frank put out a book called “How to Disappear,” a bestseller about all the ways to create false leads and throw people off. But in recent years he’s revised it to say you will leave a digital footprint no matter what you do. You can be the Mother Teresa of online deception and you will still leave something behind. So rather than eliminate your footprint, his message is about stretching the footprint.

So he’ll pay a homeless guy to buy a phone in Times Square so it’s his face captured on all the CCTV cameras and not Frank’s. He’ll set up email coordinates with one online contractor in India to ping to a contractor in Uzbekistan. It’s just putting as many steps as you can between you and what you’re trying to obscure.

So, in the end it’s a double-edged sword, and the internet helps you disappear, but then you have to pretty much stay away from it.
Looking through the historic and contemporary cases, and talking to experts, the main reason people can’t seem to fake their deaths and stay disappeared is that they simply cannot cut ties with their former lives. They can’t stay away forever from their children. People think it’s a temporary fix and you can reintegrate back into your life eventually. But you can’t do that. You really have to go away.

We have so many more ways to stay connected, and a lot of people, if you’re not doing all your due diligence and research, think they can use this kind of burner phone and no one will find you, or use Tor on your computer and you’ll be good. It’s simply not the case. Technology qua technology is not the problem in staying gone. It’s the human insistence to stay connected. It’s a perennial human nature problem more than a technology problem.