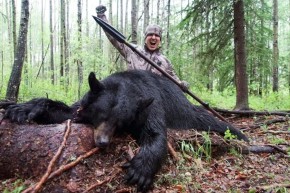 Officials in Alberta, Canada moved swiftly to banish spear hunting after a video of an American shown slaughtering a black bear with a GoPro-mounted spear in the province drew international outrage.

Calling the the practice “archaic” and “unacceptable,” the provincial government said it planned to introduce a ban this fall on the blood sport less than 24 hours after footage of hunter Josh Bowmar’s gruesome kill went viral on Monday. Officials also condemned the Columbus, Ohio man’s action and asked Alberta fish and wildlife authorities to investigate whether charges are warranted, the Edmonton Journal reported.

In a 13-minute video published on YouTube, Bowmar—a personal trainer and former competitive javelin thrower—is show baiting a black bear in an outdoor clearing. Using a 7-foot spear attached with a GoPro, the 26-year-old then gores the giant beast. Elated, Bowmar breaks into a dance and later drops to his knees in delight.

“I can’t believe that that just happened,” says a beaming Bowmar, whose hunting YouTube channel is a virtual gallery of his and his wife’s trophy kills. “I’ve just did something that I think no one in the world has ever done. And that was spear a bear on the ground—on film.”

Later in the video, the chiseled body builder and his hunting party come across the dead bear in the woods, the animal’s intestines hanging from its mangled body.

The footage, first published by British tabloids over the weekend, sent scores into a wild frenzy. Hundreds of angry viewers flooded the hunter’s YouTube page with elaborate death threats, expletive-filled screeds, and speculation about the size of certain parts of Bowmar’s anatomy. Hundreds more skewered him on Twitter.

Josh bowmar absolute cunt of a human!!! Hope he gets a kicking!!!

F@$% you #joshbowmar You must have one teeny weeny weenie if you can only feel like a man by killing a bear. https://t.co/gfucgWibTc

Sadistic piece of human trash Josh Bowmar stabs a bear with a spear — then smiles and laughs about it dying in pain https://t.co/Em0JpirgLi

Despite the seething digital mob, Bowmar doubled-down and lashed out against critics. “You all should be ashamed of yourselves for trying to kill a heritage that has existed for over a million years,” he told The Mirror in an interview. “Literally, since the dawn of man, the spear has been a vital role in survival.”

Uploaded on June 5, the video amassed over 208,400 views on before it was removed from public view on Monday. Bowmar’s channel, Bowmar Bowhunting, is home to over 8,000 subscribers—and dozens of other graphic hunting videos. In one clip, published last year, Bowmar’s wife Sarah are seen laughing after they decapitated a turkey with an arrow.