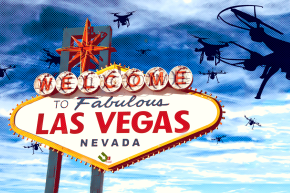 Drone Zone: The 5 Best Cities For Fliers
By Allee Manning 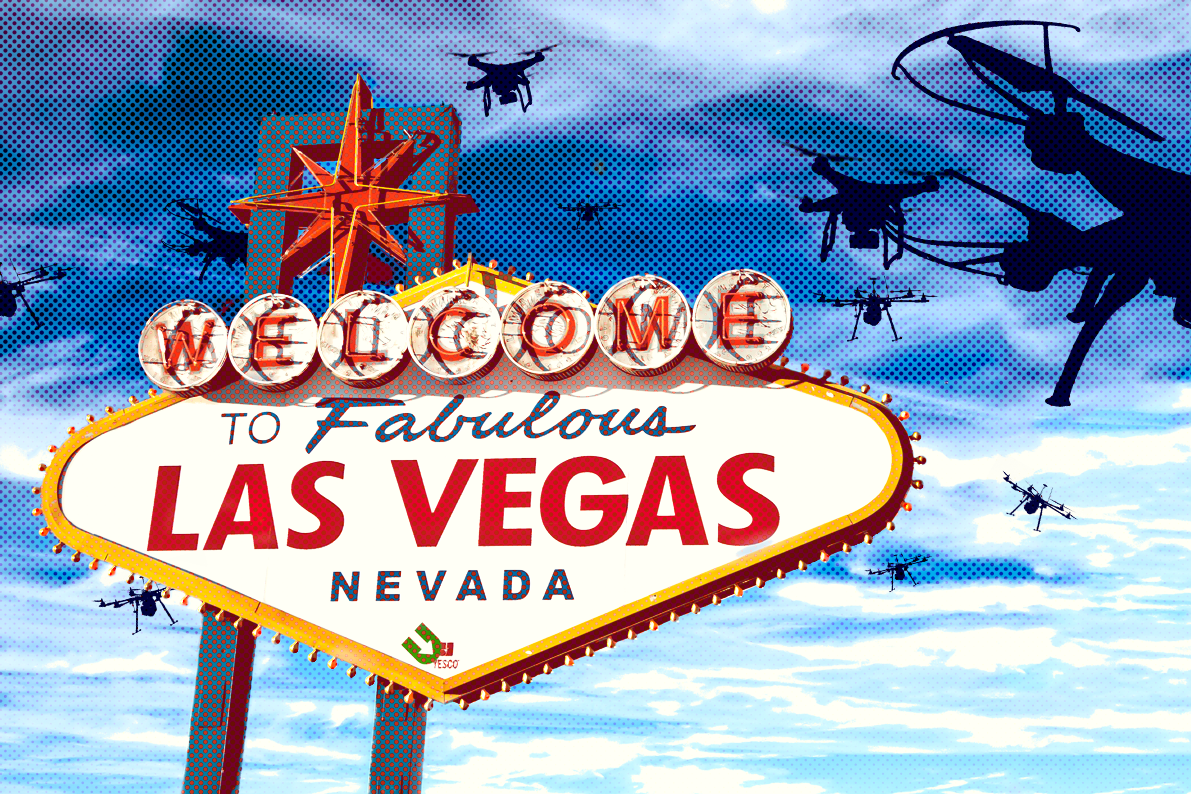 America’s obsession with drones is reaching new heights. Whether we’re using them to film weddings, deliver groceries, or kill those dubiously dubbed terrorists, unmanned aerial vehicles are bigger than ever in the U.S. A new report found that the drone industry could grow tenfold to 67.9 million units shipped per year by 2021. People are already planning their vacations with their drones in mind and traveling to compete in national competitions as legislators struggle to keep up with the pace of this widespread adoption. But it’s becoming increasingly apparent that not all airspace is created equal.

We set out to find the best all-around American city for drone fanatics, using a number of criteria.

Houston, TX, is America’s biggest drone city if you look at absolute figures, with more than 3,000 drones registered there. But if you adjust that figure to account for population, the picture is a little different. Cities in Florida dominate the top five with Orlando claiming 6.74 drones per 1,000 people. Miami is next with 5.26 drones per 1,000, and Vegas comes in third. Tampa and Cincinnati round out the top five.

But it’s not just a numbers game. As well as looking at the sheer number of drones registered in each city, we looked at jobs in the drone industry and the frequency of drone accidents. The FAA recommends you not fly drones in the immediate vicinity of stadiums and airports and military facilities, so we looked at how many of each were present in each city. We whittled down 35 American cities to the top five cities for drone-friendliness.

Here’s how it all breaks down.

San Francisco has an abundance of jobs for drone pilots that make the city an especially appealing choice for those looking to fly. Given the combination of the city’s natural beauty and the fact it’s home to some of the most tech-forward people and companies on the planet, it’s no surprise that drone culture there is vibrant, as evidenced by a meetup group of hobbyists nearly 2,000 people strong.

“The community is essentially artists and developers and engineers,” said Marque Cornblatt, founder of the Aerial Sports League, based in San Francisco. “The bay area has always been a hotbed of robotics and high-tech engineering. There’s a forward-thinking mentality here.”

This mentality translates to a strong community of drone enthusiasts.

“People who fly here are educated and know where they can and where they should fly. It’s relatively safe to fly here,” said Werner Von Stein, an instructor at the San Francisco Drone School, adding that most hobbyists fly in small parks, tennis courts, or the Golden Gate Park, as well as areas with fewer aerial restrictions just outside the city itself.

And as tempting as it might be to fly over the Golden Gate Bridge, Von Stein stresses the importance of steering clear (and so do the authorities).

“Would it be nice for everybody to be able to take pictures of the Golden Gate? Yeah, but the problem is that drivers can become distracted when the drones are flying too low,” he said, reflecting on how too many people doing so resulted in recent legislation banning it.

While Raleigh is perhaps a less obvious city for drone users than metropolises teeming with tech bros, it’s got plenty of registered drones and clear enough airspace to work its way into the number two slot. The city is home to three universities, all three of which have engineering programs and (feasibly) a whole bunch of resident techie drone geeks. Drone company PrecisionHawk also calls Raleigh home. The company raised $18 million this year to expand its drone systems business. It also played a role in helping the Department of Transportation set up national drone registration guidelines in 2015.

Drones are massively popular in the innovation and commerce hub that is Las Vegas. Add that to the fact that just outside the metropolis in the neighboring desert is a military base known for its extensive drone operations and its place at number four makes sense. Over 2,000 drones have been registered in the city where drone taxis are soon to begin testing. Scan through YouTube and you’ll see a ton of videos from tourists and residents who have droned the famous Vegas strip—something you absolutely shouldn’t do because it’s illegal, by the way. But where the buildings taper off, there’s plenty of desertscape within reach.

The New Mexico City straddling the Rio Grande is known for its natural beauty, perfect for aerial flight. And residents are quite used to flying objects—the city has been home to the International (hot air) Balloon Festival since 1972. (But please don’t try to capture that annual event with your drone, as they have been banned.) Drone enthusiasts in Albuquerque can capture gorgeous footage from above the Rio Grande river, or shoot the city at its sleepiest, snow-covered point. Drones tend to be in heavy use along the border, too, as authorities scan from above for smuggling and people trying to enter America from Mexico.

It’s inland from the beautiful California coast, but this city is surrounded by scenic mountains which make it ideal for drone enthusiasts for many of the same reasons as San Francisco. Residents share the same enthusiasm for tech given their close proximity to Silicon Valley. The city’s drone culture is especially apparent in the fact that it annually hosts the Drone World Expo.

Beyond the top five, there’s a lot more to consider.

When it comes to the growing drone industry, San Diego is the most vibrant marketplace for would-be drone pilots and technicians. But that’s not surprising: San Diego is home to General Atomics Aeronautical, which produces Predator and Reaper drones for the US military. It’s also home to Northrop Grumman, which is developing some of the most advanced wartime unmanned aerial vehicles ever made. These are not jobs where you’ll be shooting wedding videos from DJS Phantom, these are jobs where you’re more likely to learn how to shoot missiles at terrorist targets thousands of miles away.

Divvied up per capita, San Diego is neck-and-neck with San Francisco, and although they’re not that far apart, the jobs on offer in the two cities couldn’t be more different. If you want into the San Fran drone world, you’re more likely to work in product for camera maker GoPro, or enterprise drone operation Airware, both of whom are hiring. And if you want to work in content production, New York is where you’ll find jobs for creative eye-in-the-sky gigs with companies like Vice Media. A thriving and lucrative real estate market has helped boost the demand for aerial photography and videography, in Tampa FL, where drone racing is also starting to take off.  For cities in the top five like Las Vegas, available jobs are mostly with contractors developing technology or processes for the American military.

There are certain places where drones simply aren’t welcome. Hell, there are certain places where drones are downright dangerous. The FAA lists airports and sports stadia among the areas where drones shouldn’t fly. The list of where you shouldn’t fly your drone fluctuates over time. There are temporary flight restrictions that pop up additional flight restrictions for air shows, security reasons, space launches and other events. Flying your drone near a wildfire is also a no-no.

Cities with more obstacles or restricted areas are by definition trickier—both legally and practically—for drone pilots. We listed the big obvious ones—airports and stadiums— to see which cities demand most from those who fly around them.

One of the reasons for Colorado Springs’ early dominance in our rankings is that it had zero stadiums and a handful of airports near the urban centre.But it’s surrounded by US Air Force facilities, several of which are inside the city bounds, which bumped it out of the top five. Raleigh also enjoys relatively unobstructed skies.

Houston is by far and away the city with the trickiest airspace. Even though its CBD is small and compact, meaning there’s a lot more open sky around the edges, that sky is pretty busy. The city has 93 registered airports, airstrips and helipads/ports, some of which are commercial, but others located atop hospitals, police stations, banks and other locations. It also has the most stadiums—28 of them—which isn’t very sporting if you’re a drone aficionado.

What goes up must come down. Sometimes they do it according to plan—sometimes not. The more drones there are in the skies, the more drone accidents there are—that’s just a plain ol’ numbers thing. While serious commercial drone accidents are uncommon (though not altogether unheard of, costing one toddler his eyeball last year) incidents are fairly commonly reported. They can range from near-misses with other aircraft, law enforcement interventions, and sightings that have hindered firefighting. Areas with a high number of incidents reported can signify user carelessness, strictly regulated airspace, or communication gaps between particular city or state agencies and their drone-flying populace about issues like no-fly zones.

Tucson, AZ, has the lowest number of reported drone incidents per capita in 2014 and 2015, making it the overall safest city for drone flight on paper, with Colorado Springs, San Francisco, and Raleigh trailing close behind.