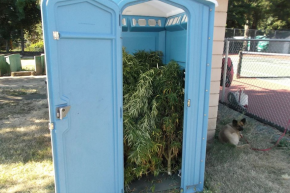 An Oregon police department says it found a record-breaking stash of pot inside a portable toilet. Skeptical stoners who spend too much time on social media aren't so sure 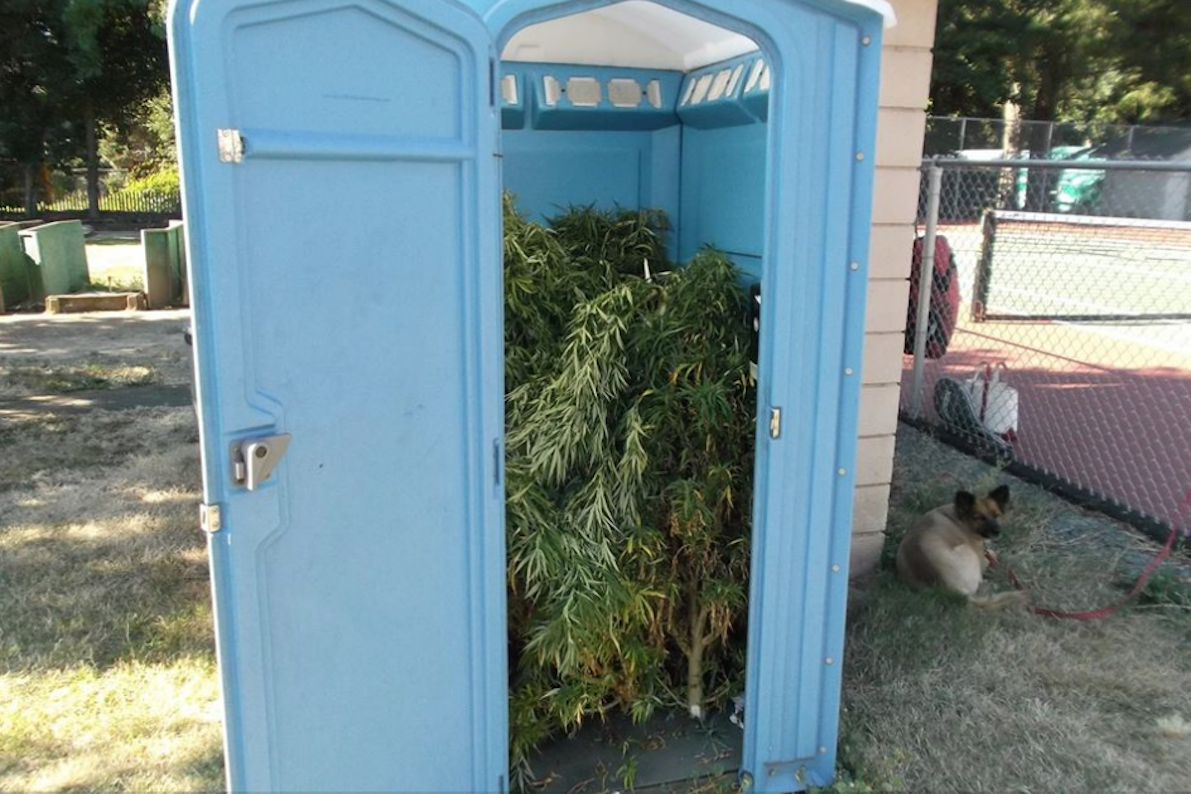 A rash of pot heads are fuming over claims by an Oregon police department that it snatched a record haul of marijuana left inside a public porta-potty.

Rogue River police said it recovered eight stalks of freshly-cut cannabis plants—with some as tall 6 feet—after a pedestrian found the leafy load inside a portable toilet at a city park. The agency posted photos of the 35-pound stash on Facebook Wednesday, saying it was the largest pot seizure the department has ever made.

“It’s the biggest seizure ever in our department,” crowed Rogue River Police Chief Ken Lewis, the Medford Mail Tribune reported. “We’ve never seized that much. Who would have thought it would come from a porta-potty?”

Marijuana enthusiasts eyeing the photos closely have since contested the historic claims, flooding the Rogue River Police Department’s Facebook page with a series of astute observations.

“First off it doesn’t have the buds yet can I get a mutha fuckin moment of silence for those young ladies killed before their time! #plantlivesmatter,” wrote Nelson Hendrickson, whose Facebook cover photo shows a bearded man taking a selfie in front of an indoor marijuana grow.

Tred Bar wrote: “it is skunk weed which is worth next to nothing compared to the buds. This was just a lazy ass pot grower disposing of the remainder of the plants wherever he wanted to.”

Another user, Trevor Riley Ruiz, concurred. “There is no trim. This is all purely biomass. Totally worthless unless you wanna make some hemp toilet paper.”

In an interview with Vocativ on Thursday, Lewis pushed back against the brewing buzzkill.

“Some people would say this wasn’t the best quality [weed], which is true,” he said. “But those plants were sticky and smelled to high-heaven. You could still grind it up, put it in a pipe, and smoke it. You’d get high, eventually.”

Is that actually true? To settle the matter, Vocativ contacted Tony Greenhand, a marijuana grower and professional joint roller in Albany, Oregon.

Greenhand laughed when he saw the Facebook photos and heard Lewis’ explanation. “It’s absolute nonsense,” he said. “Just because it has an aroma doesn’t make it flower that could actually be smoked. I’d say the street value of that is zero dollars. That stash is somebody’s trash.”

But this trash could still land someone in the slammer, Lewis said. Despite marijuana being legal in the state, Oregon residents are allowed to possess only eight ounces of pot or grow up to four cannabis plants—at home.

“What we have here is an offense, even in liberal, pot-infused Oregon,” Lewis said. The police chief, however, conceded that he did learn a few things from reading the hundreds of comments that cropped up on his department’s Facebook page.

“There are apparently a lot of people who know a hell of a lot about marijuana,” he said.

Determined to have the last laugh, Lewis ordered his staff to put the seized pot through a city wood chipper. He then posted the aftermath in a series of Facebook photos.

“Well, all good things must come to an end,” the post reads. “It is now green mulch.”