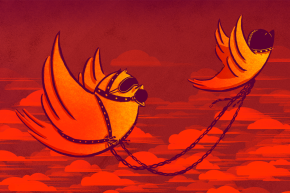 The Dominatrixes Humiliating Their Subs On Twitter
By Tracy Clark-Flory 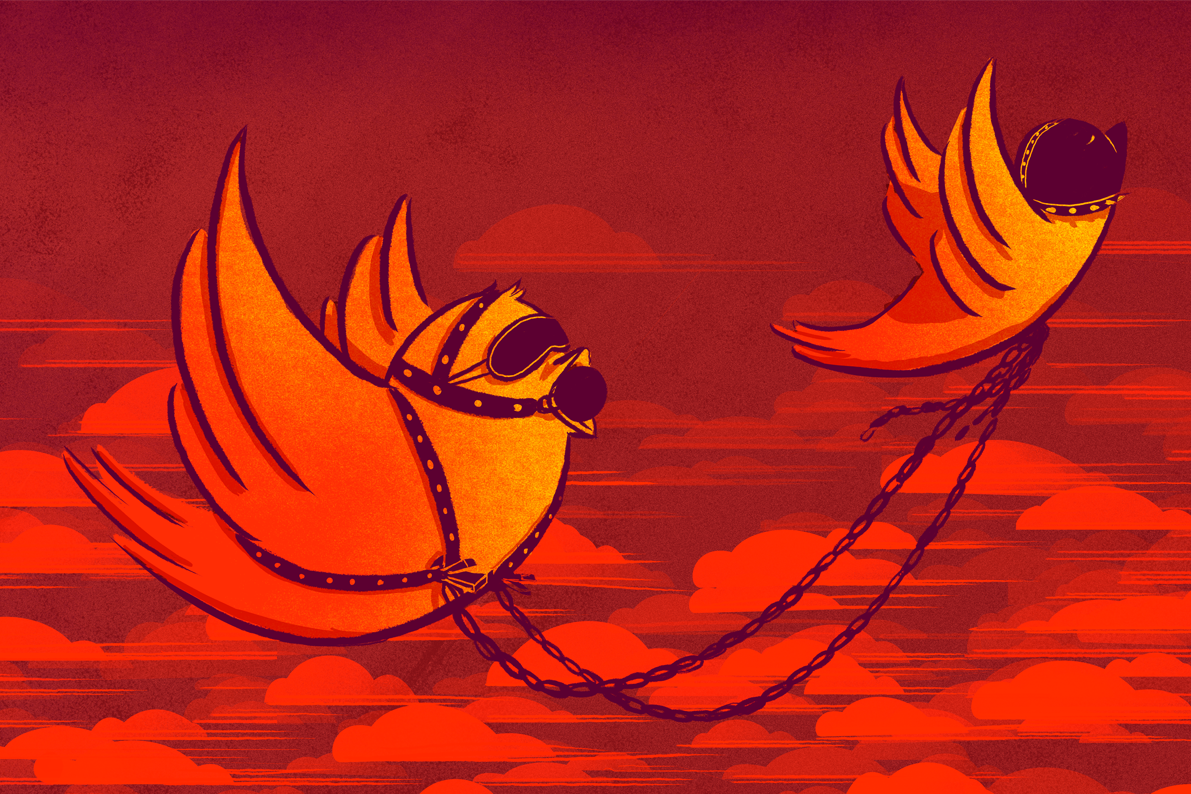 “Goddess Samantha” has bright blue eyes, long platinum hair, and a talent for belittling men on social media. On a typical morning, the U.K.-based dominatrix might tweet, “My hair appt is at 10am. Which lucky loser is covering the cost?” If she’s feeling more playful, there’s the “RT game,” in which a submissive agrees to pay for every retweet or “like” that she receives in a set time period. In a recent round, a sub ended up paying 83 pounds after just 10 minutes of play. Goddess Samantha, who asked to remain anonymous and specializes in what’s known as financial domination, or findom, was sure to tweet a screenshot of the deposit he made into her account, along with a direct message from the sub reading, “Didnt think it would be this much!!”

It isn’t just findom that plays out this way on social media. Dommes post photos of their IRL subs in women’s panties, licking their high-heeled feet, and wearing messages of devotion scrawled in pen or lipstick across their bodies. There are RT games where retweets and “likes” translate into days subs spend in chastity cages. Even passive followers are treated to messages of female domination and superiority, and being called “losers,” “betas,” and “pigs.” On the other side of things, submissives create Twitter profiles devoted solely to their mistresses, where they RT their domme’s every tweet and routinely announce their servitude, sometimes with photographic evidence of locked chastity cages.

While there are certainly male dominants on social media, it’s the world of femme doms that is thriving online, and most of the submissives are men.

For these subs, social media evidence of their submission provides a thrill beyond the initial act itself—whether it’s handing over money or donning a frilly dress. “[It’s] the thrill of being found out perhaps,” said “Mistress Amanda,” a domme who asked to remain anonymous, in a direct message. “The lack of control, knowing once it’s out there, there’s no way to know it won’t come back even if it’s removed. Or even just being sickened or proud by their own actions and that others have seen it, seen what they have done.”

“Jim,” a submissive who has had dommes tweet photos of him kneeling at his laptop while transferring them money, wrote in an email, “I get a rush and when people comment on it or retweet it I get another rush.” He describes it as a high, “like being on an opioid.” He also interacts with dommes privately via Snapchat and Kik, where they will order him around, typically instructing him to send money, and give him the silent treatment if he doesn’t comply. “I have always wondered why this excites me so much,” he said. “I used to feel guilty and even got therapy, but now I just have a set amount I spend and it becomes entertainment. Yes, weird entertainment, but entertainment nonetheless.”

“Mistress Anna,” who asked to remain anonymous for fear that her account might otherwise be shut down, recently posted a photo to Instagram of a fancy meal out with a fellow domme. The caption (which, at her request, isn’t being directly quoted) hinted at the fun of eating on a sub’s dime—without him being there. “Especially when I’m with friends, people get very excited by the idea that there are multiple women, like, laughing at you while they spend your money,” she said. “Sometimes I use someone’s screenname specifically and say they’ve been good or they’ve been bad or they’re a disgusting nasty pervert, depending on the person.”

In another recent Instagram photo, she’s shown on the beach with a caption that announces how much fun she’s having frolicking while subs send her money. That’s a common trope: dommes posting about how great it is to relax while subs are hard at work, earning money that they will ultimately just hand over to them.

But a ten dollar donation is just as worthy of a post, because it helps create the impression that, as she puts it, “women are goddesses and the legions of men worship at our feet, so you’re just one of the pathetic legions.” Which is to say that on a fundamental level, domination functions much like anything else on social media: It’s a carefully constructed illusion.

More Your Kinks Aren’t Nearly As Weird As You Think

Social media also allows the sub’s fantasy to play out in ways that can feel both safer and more extreme. An image of a groveling sub posted to Twitter is potentially visible to infinitely more people than if that sub were to grovel in a dungeon, or even in a public IRL space. At the same time, though, the online setting also allows more control. “It’s not like you’re taking someone out into the street and anyone can see them,” said Mistress Anna. “You can control whether their face is showing, you can post it on a locked account where they get that same thrill but it’s a controlled group of people who can see it. I think it’s expanded the possibility for people to get that quote-unquote ‘public thrill.'”

Dommes generally take the negotiation of these public posts very seriously. “I only post humiliating photos and messages if that’s what the sub is looking to have done to them,” said “Madam Margaret,” who asked to remain anonymous. “It’s all about consent. If you don’t want me posting a nude picture of you I won’t.” When subs accidentally attach their names to their financial offerings, Mistress Anna always omits them from public posts.

That might be why there are so many countless Twitter accounts devoted to these social media dommes, with handles that often follow the format of so-and-so’s-submissive. Goddess Samantha has her own Twitter sub, who recently sent her a direct message of a list of his monthly expenses for approval. She posted a screenshot for all to see. The first three items were all for her: nails, “treats,” and donations. Then came his own expenses: rent, electricity, internet, and food. She commented in a tweet, “About right…He could skip the electric & live in darkness though.” But he obviously needs that internet connection.