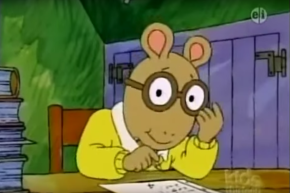 Most of us can’t get enough of the hilarious (and sometimes hilariously offensive) Arthur memes flooding the internet. But WGBH, Boston’s public television station that spawned these memes, is not down with having its earnest aardvark misappropriated for our entertainment.

In a statement, WGBH spokeswoman Ellen London said the network appreciates that the memes, “have been created and shared in good fun,” but is “disappointed by the few that are outside of good taste” (i.e. most of them).

“Our hope is that Arthur and his friends will be depicted in a way that is respectful and appropriate for all audiences,” London said.

Arthur memes aren’t new, but their sudden resurgence over the last week is due mostly to the realization that Arthur’s clenched fist is the perfect embodiment of quiet frustration.

This inspired others to create more wide-ranging (and often pretty filthy) memes of Arthur and friends. There are entire twitter accounts dedicated to sharing them, and, sadly for WGBG, the trend is showing no signs of slowing down.

Man don't start , you knew i had a girl pic.twitter.com/NQ6OpLeEOl

But getting people to tone down their Arthur memes? Good luck with that! WGBH may not like it, but the reality is that turning something into a meme is the internet’s highest form of praise. It’s only fitting that the show, which debuted in 1996 and is one of the longest running cartoons in history, takes its place in meme history alongside other staples like “The Simpsons” and “Spongebob Squarepants.”

when u realize the arthur meme is just the government distracting us from Harambe's unjust death pic.twitter.com/RN8wOdRZRl