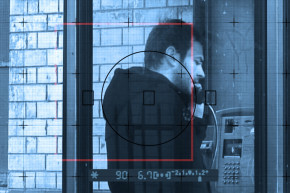 Inside The Government Centers Where The FBI Shares Intel With Police In a drab room in a drab office block in West Virginia, a bank of screens display news and law enforcement agency insignias. On an average day, there might be seven staffers around the tables, and while it’s nothing much to look at, its director believes a group like this in a room like this could probably have stopped 9/11, had they been meeting at the time.

This is the West Virginia Intelligence “Fusion Center”—a zippy, futuristic title for a dedicated room or building where law enforcement agencies gather to share knowledge. It’s one of 78 such centers around the U.S., funded by the Department of Homeland Security and designed to share law enforcement intelligence, sometimes controversially.

Mondays usually see between 15 to 20 people from agencies like the West Virginia State Police Department, the FBI, county police departments, and the Department of Corrections—all gathered at the same table to share case information and department priorities from their respective agencies.

“There are a number of different agencies that we have in here,” Ron Kirk, the WVIFC’s director, told Vocativ. “The entire concept of a fusion center is to get people talking back and forth and freely sharing information, so that they don’t hold that information to … their agency only.”

Kirk, a 40-year law enforcement veteran, said fusion centers are a fundamental and invaluable tool for police. “Back when I was a young [West Virginia State] Trooper, if I had something that would go on in Boston, I’d just have to pick up the phone and call the State Police or call the Boston Police Department and ask information of someone I’ve never met before, hoping that they’re going to do a good job,” Kirk said.

“It’s different now. Dave Carabin is the Director of the BRIC, Boston Regional Information Center,” the fusion center that serves the Boston area, Kirk said. When brothers Dzhokhar and Tamerlan Tsarnaev carried out a terrorist bombing attack during the Boston Marathon in 2013, Kirk said, he immediately called Carabin. “I said, ‘I don’t want to disturb you. I know that you are deep in it right now, what is it that we can do to help?’” The West Virginia Fusion Center helped run down leads, Kirk said, freeing up Carabin’s staff to more quickly hone in on the Tsarnaevs.

What fusion centers do have in common is their provenance. They were a product of the terror attacks on September 11, 2001, and the subsequent focus on bringing the national security and intelligence-gathering mentality to law enforcement. The 9/11 Commission Report, the U.S. government’s official audit of how the attacks happened and how to prevent others like them, specifically called for more “information sharing” amongst law enforcement agencies. “The system of ‘need to know’ should be replaced by a system of ‘need to share’,” the Commission recommended.

Said Kirk: “I’m thoroughly convinced that 9/11—if we would have had both Department of Homeland Security and fusion centers back at that time—would have never happened, at least to the extent that it happened.”

To say that fusion centers might have prevented 9/11 might be overstating it. What makes the knowledge-sharing process more valuable now is the amount of available data, and the formats that make it more broadly accessible.

Take, for example, data from automatic license plate readers (ALPR), a technology that tracks every car that goes by, and which has cropped up along highways and roads with increasing frequency of late.

Their concept is simple: A camera photographs every single car that passes, reading its license plate number and noting the time. If police need to retroactively trace a car’s route, that makes it easy. It’s essentially a robot police officer with a photographic memory on a permanent, zero-distraction stakeout. “I would have loved, again as a young trooper, to have had the ability to do that,” Kirk said.

Laws for ALPRs vary wildly by state. New Hampshire limits them to specific investigations, and police in Maine and Utah can’t keep their data for more than a month. Many states, however, including West Virginia, don’t have a law on the books specifying data retention periods, leaving it up to local statutes or law enforcement’s own guidelines. Left unfettered, there is potential for police departments to amass vast amounts of data about citizens’ movements using ALPR technology.

The WVIFC maintains the majority of the state’s several dozen license plate readers, but not all of them. The U.S. Marshall’s service, as well the West Virginia State Police, and several county and city police departments, all possess such equipment in the state and can share the data with the Fusion Center when the need arises, according to a map in the fusion center.

For Kirk, it’s a no-brainer, because even if that information is stored for a long time, nobody accesses it unless it’s for an investigation. “Just put that in a book that you never use, unless all of a sudden a crime happened and you needed to know if that plate was in that vicinity at that time and you went back through your book and looked at that.” Kirk says it’s become an essential tool in his office. “We receive requests from other law enforcement agencies on a daily basis. Almost probably every other hour. [Agencies saying,] ‘We’ve had a rape.’ ‘We’ve had a murder.’ ‘We have a missing child.’ … and there’s a license plate associated with that.”

Privacy advocates have a problem with long-term retention of ALPR data. In 2015, the ACLU sued the Fairfax County, Virginia Police Department over its policy of keeping those records indefinitely, saying it was a violation of state law.

“The New York Police Department was engaged in a program of long-term and deep surveillance of Muslim communities several years ago,” Nate Wessler, a staff attorney at the ACLU’s Speech, Privacy, and Technology Project, told Vocativ. “They were using automated license plate readers as they drove by houses of worship, by mosques, downloading lists of all the cars that were nearby, which allowed them to start to create a list and a database of who was worshiping there. That raises serious concerns about the right to practice religion freely in this country, the right of assembly, and even free speech rights.”

It’s unlikely, however, that the proliferation of ALPRs is going to stop anytime soon. “Automated license plate readers can be a very effective law enforcement tool when used appropriately,” Wessler said. “There need to be strong controls on their use and retention limits and warrant requirements and other protections to make sure that they’re not being abused to harass political dissidents or engage in racial profiling or to ensnare people into the criminal justice system who actually have done nothing wrong.”

If advocacy groups are worried about license plate data, some of the more advanced technology should be enough to make them truly paranoid.

Fusion centers, like some police departments, can acquire technology originally developed for the U.S. military. Although they’re nominally part of America’s anti-terror defenses, they are more often used to help law enforcement, meaning military technology is used for domestic purposes.

The WVIFC, for instance, is one of the few fusion centers confirmed to use facial recognition software originally designed for the Department of Defense. It leases facial recognition software called MXServer from a West Virginia company called Tygart, an IT company that since 9/11 has marketed software to U.S. military and intelligence agencies, but increasingly also sells to American law enforcement.

“We decided, well let’s focus on use application of facial recognition, in index and searching videos and photographs,” he said. Part of what makes their facial recognition software so effective is their use of cloud processing—using Amazon Web Services, for instance—to rapidly speed up the search of vast databases of photos—troves far too large to fit on a government computer, never mind index and search.

As evidenced by a video demo that Tygart provided to Vocativ, featuring figures such as Osama bin Laden and ISIS commander Abu Omar al-Shishani, MXServer is pitched as a way to capture terrorists. In practice, the WVFIC uses it to identify suspects of less violent crimes. Kirk cited a woman who repeatedly cashed fraudulent checks with banks, a hunter illegally poaching in Pennsylvania near the West Virginia border, and a bank robber in West Virginia’s Eastern Panhandle. The faces of the first two were caught on bank cameras and Pennsylvania Department of Natural Resources game cameras, respectively, which volunteered them to the WVIFC. The bank robber “was sharing photos of him standing next to the money he robbed with a pistol that he’d robbed the money with,” Kirk said. In all three cases, local authorities couldn’t identify the suspects. But via a fusion center, other agencies were able to help.

While a given agency might not have direct access to a particular file—someone’s driver’s license photo, for instance, or their license plate number, or their criminal record—fusion centers partner with agencies that do.

“I’ve been asked by some of our legislators ‘Can you wiretap telephones?’ No. Fusion centers don’t do that, but we do have agencies in here that if they need to do that based upon information that we give them, such as the FBI and the State Police, they have that authority with them. They bring that in here,” Kirk said.

“If a bank had a situation like that they, obviously, would call in the police agency. At that point, the police agency calls us. Where we receive our suspect list from is normally photographs,” Kirk said.

Unlike the FBI, the WVIFC’s facial recognition program doesn’t get direct access to national photo databases like the State Department’s collection of visa and passport photos. It does, however, make good use of its open information-sharing relationship with other state agencies. “We have people from corrections and regional jails out here. We get archive photographs of people that have been booked into their system,” Kirk said. “We can send a photograph to our department of motor vehicles and have them run a check, but again, we don’t have direct access.”

But while the tech that the WVFIC uses can only compare still photos to still photos, Tygart also produces real-time facial recognition technology that can scan a live camera feed, pull any known comparative photographs, and even link that person to known accomplices, as evidenced in this commercial, the only video uploaded to its YouTube channel.

Waugaman declined to name which agencies use this technology. But researchers think they’ve found one. “We’re pretty sure (but not completely confident) the Los Angeles Police Department uses real-time face recognition tech,” Clare Garvie, a law fellow at Georgetown’s Center on Privacy & Technology, told Vocativ, citing a series of references in press releases, comments by partner departments that have worked with the LAPD, and moderated comments in phone interviews with police officials.

“I think everyone refers to Minority Report, if you’ve seen that movie, about how they used facial recognition and iris recognition and things like that. I actually think that that is the way of the future,” Kirk said.

“It gets better all the time. More and more companies get involved. The algorithms are more defined. […] Iris recognition and fingerprint recognition and things like that. That’s obviously the way things are going to happen. I see that playing a very large part in the not too distant future.”