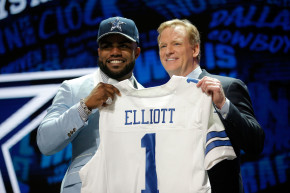 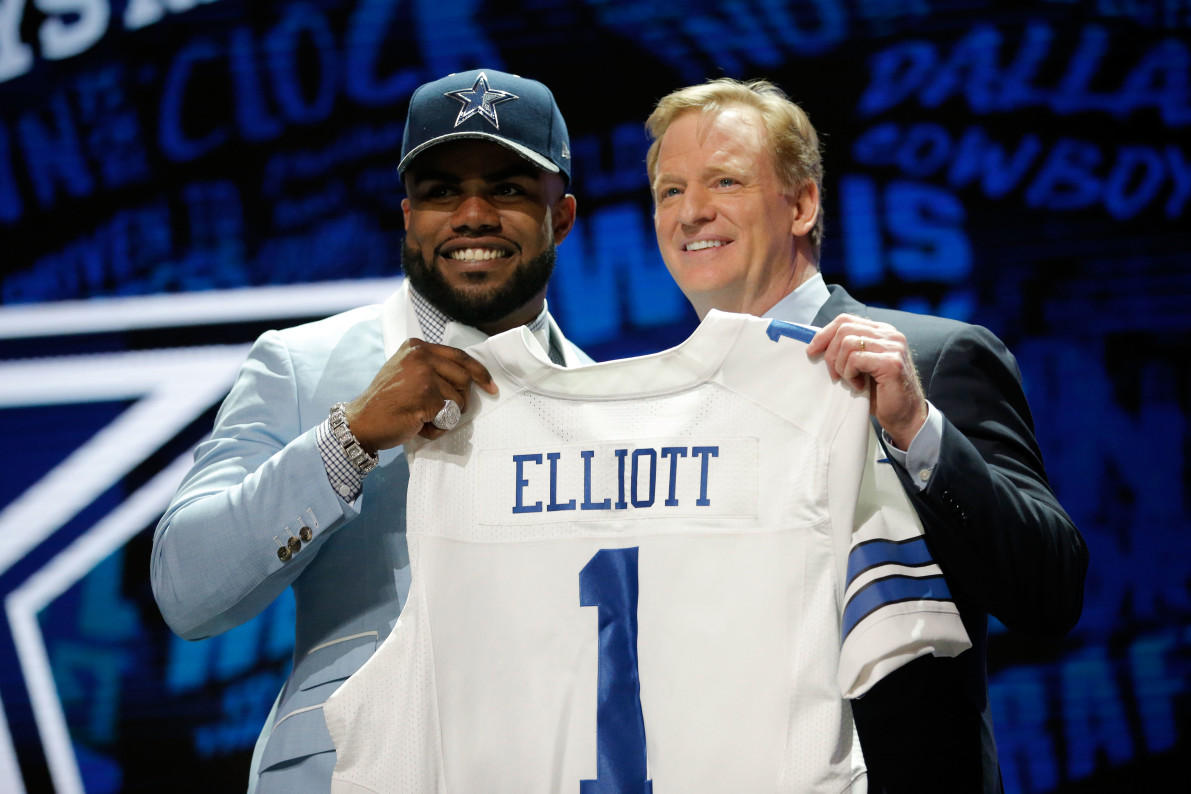 Ezekiel Elliott was seen as the perfect fit for the Dallas Cowboys when the team made him the fourth overall pick in the 2016 NFL Draft. While we haven’t yet gotten a chance to see if that’s the case on the field, he’s already shaping up to be a problem off the field.

Last week, Elliott’s ex-girlfriend accused him of domestic abuse in a series of Instagram posts that showed bruises all over her body, including around her neck. She claims Elliott has been abusing her for months, and filed a report to Columbus police saying she was attacked by Elliott last week while sitting in the driver’s seat of a car.

There’s conflicting witness testimony about the night in question, which is why Elliott wasn’t arrested, although local police referred the alleged victim to a prosecutor. The Cowboys, a reliable employer of men accused of beating women since domestic violence apologist Jerry Jones purchased the team in 1989, say they have text messages that prove Elliott’s innocence.

In this situation, where a woman appears to have been abused but the circumstances remain in question, one might be inclined to reserve judgment until more information is available. However, Vocativ read the forum on the official website of the Dallas Cowboys and found that fans of “America’s Team” have already rendered a stern verdict in the case of their team’s new feature-back—not guilty.

“When women are free to make false accusations without repercussion or negative consequences, the incentive to do so for profit is hard to resist for some,” user jumbo075 said mere minutes after the story broke. “The vast majority of women won’t do that.  But the small minority of truly gold-digging sluts among the female population will.  The worst part is that the vast majority of women also refuse to condemn the small minority who do so, thus undermining the credibility of the even smaller minority who actually do suffer.”

This vile sentiment was echoed throughout the thread. Even fans who left open the possibility that Elliott abused the alleged victim believed that her claim is more than likely a “get rich quick scheme,” a nefarious plot to take down a celebrity and get paid in the process. Furthermore, jumbo075 suggests and his fellow Cowboys fans concur that this is what’s happening in the majority of domestic violence cases, that only an “even smaller minority” of women are actually victims.

“In any situation you could always say there could be someone who has not been truthful about their experience but in all my years of experience working with survivors, that’s not what’s happening,” said Rachel Goldsmith, Associate Vice President of Safe Horizon, a nonprofit that works with victims of domestic abuse. “When people jump to criticize [victims], maybe they don’t fully understand the situation or the issue.”

That would seem to be the case with Cowboys fans, some of whom inexplicably speak about Elliot’s case with the authority of someone who witnessed it or knows the parties involved. Numerous studies have concluded that the vast majority of domestic violence incidents go unreported, meaning the “even smaller minority” is actually much bigger than statistics suggest. The statistics? In 2013, there were 76,704 reported victims of domestic abuse in Texas alone. The National Coalition Against Domestic Violence estimates 10 million abuse victims annually nationwide.

If you believe the majority of women are crying wolf as part of a plot to milk innocent men for money, that would make for a hell of a lot of women making false claims of abuse, but most domestic violence lawsuits do not result in a monetary reward for the victim, only justice served against the abuser.

“Legal cases for the most part are about accountability, not restitution,” Goldsmith said. “It’s really about someone coming forward because they want some level of accountability. They want to say this happened to me, domestic violence is a crime, and this person needs to be held accountable.”

But none of this prompts Cowboys fans to consider that Elliot’s accuser might be a victim. Many fans suggested her injuries were either self-inflicted as part of her plot or that they resulted from her attacking him. Another suggested that we should put women who make domestic violence claims in jail as a way of discouraging these phantom false claims. Some fans chastised Elliot, but only for “putting himself in a bad situation.” Others suggested the alleged victim’s claims were part of a vast NFL conspiracy against the Cowboys, as if the team’s repeated signing of players with a history of violence wasn’t bringing the issue on themselves.

“Sports fans, we love our teams, and we want our teams to win,” Goldsmith said. “That’s ingrained in the culture of being a sports fan. You want your team to do well. If it’s a player you like or a position that’s really vital to the team you may have apart of you that just doesn’t want to believe it so you can continue cheering for that team.”

This mindset is not limited to Cowboys fans. With repeated instances of fans dismissing the claims of abuse victims, it’s clear that football fans value their teams more than the well-being of their mothers, wives, daughters, and girlfriends.