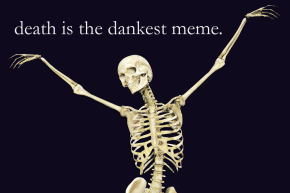 Is Death The Dankest Meme?
By Sam Roudman

Is Death The Dankest Meme? 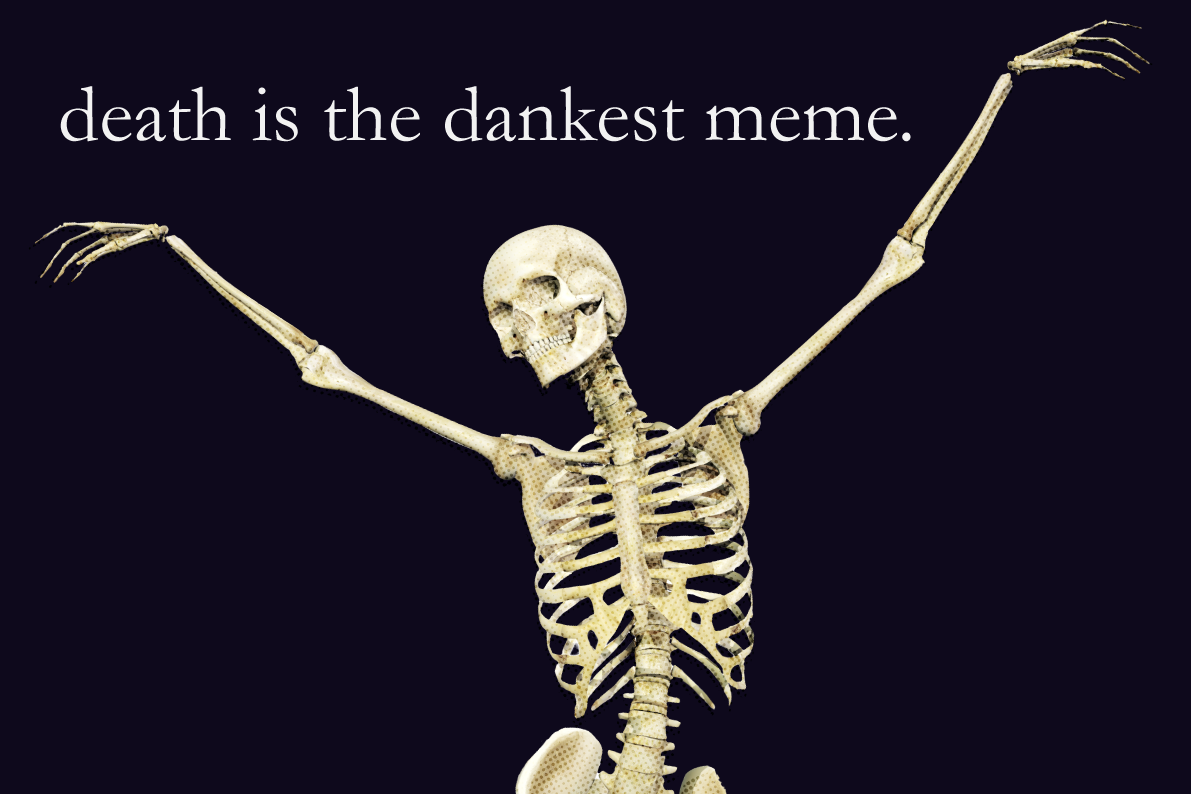 It’s springtime for weird memes on Facebook. Communities for sharing jokes and images about medieval French artillery, oblique critiques of internet culture, or pretty much anything else you can imagine abound. But in the midst of the bloom, some pages prefer to kick it in darkness. A cluster of them, tens or hundreds of thousands of followers strong, spin memes out of misery and depression. In Facebook’s bland panopticon, expressing misery might be construed as dissent. It also might be a violation of terms of service.

For the anonymous admin behind Real Alcoholic Memes, an exceptionally dark meme page with a following of almost 37,000, it’s both. “RAM is antisocial media,” he tells Vocativ over Facebook chat.

Super negative memes helped him create a community of commiseration, and pioneer a form of postmodern art therapy. But the canvas he paints on is not his own. On Facebook, the First Amendment is secondary to community standards. His experience shows how a bummer sensibility is being shaped by a novel form of expression, and vice versa. It also shows that while there is no limit to how dank a meme can be, there are limits to the darkness they can express.

RAM has been running into those limits for nine months his page has been up. He operates the page in the constant worry it could be taken down.

He’s lost count of the times his work has been reported to Facebook, a common problem for pages with similar themes (RIP the original version of Depression Memes). He’s even had to click through suicide prevention links in order to access his page. “Okay fine, I showed a noose or a needle and I guess that’s ‘edgy’ but there are…Facebook groups out there promoting the most heinous shit,” he says. Indeed there are countless pages and communities where honest racist and nationalist sentiments exist unperturbed by Facebook’s morality police.

“They say I promote ‘self harm’ but I don’t think that’s the case,” he says, “I just don’t want people to forget that shit exists.”

RAM is not safe for kids, and it’s not safe for work. You might not find it funny, you might find it offensive in one of 5 million ways (or better, take its potential to offend as part of its charm). But you can’t deny the page is more dynamic than the mere “cry for help” it advertises in its about section. It’s a self-contained world of negative expression, a pitch black nebula of snark matter. The page features memes about death, nihilism, substance abuse, and suicide, with a signature white background and words in a magenta puff paint script. Its standard motifs include depressive silhouettes, skulls, skeletons, cigarettes, liquor bottles, drug paraphernalia, and repeat characters like The Big Homie (death), Old Grumpler (satan), and Kelsey Grammer (Kelsey Grammer). There are occasional asides into politics and pop culture. True to the endless self-referentialism foundational to the meme enterprise, RAM also features the occasional meme about memes.

RAM began last year when the admin started wading into meme pages and began tinkering. “At the time [I] wanted to see my own negative experiences represented via meme,” he says. He wanted an antidote to being “constantly exposed to people’s nice lives and their vacations and significant others and fancy meals and shit.” RAM would be the opposite of that. It would spike the projections of blithe stock photo living with worst imaginable outcomes.

“It was originally just like, therapy for myself,” he says. “I was shocked I was still doing it after two weeks because it had like no followers, I had acquaintances coming up to me being like ‘hey are you doing alright?’” By his own admission he wasn’t, and still isn’t. The memes provided a release. “The things i post are very personal to me,” he says “I’m not making content for other people.”

But soon after starting to post, he built an audience despite himself. A holiday meme “no hope November” took off after being posted on the bummer meme clearing house page Nihilist Memes, and soon RAM “was off to the races.”

RAM soon had an audience climbing into the thousands. “The thing I’m most proud of with RAM is there’s a real sense of community for the sad, scared RAM fam.”

“This world is such a terrible place and it’s so frightening and overwhelming to exist in it if we can laugh at the absurdity of it all then maybe we feel less alone?” he semi-asks, “I’ve had people hit me up thanking me for this page and how it helps them cope with that stupidity.” He also says he’s been contacted by people feeling suicidal, and helped to talk them down. “I feel like I’ve helped people as much as a shitty meme lord can.”

The page has also put him in contact with fellow meme spirits, with a variety of styles. “I love a lot of pages and the people who run them are so nice,” he says. Asked how his work differs from his contemporaries, he responds “Well mine’s not funny!” followed soon by a “haha.”

“This is the internet no one gives a shit about your artistic integrity,” says the admin. Memeing, he says, is also “different from other art forms in the immediacy of it all.” “It’s hard to be precious or care about the thing when it’s only going to be looked at for maybe 10 seconds and then [be] forgotten.” The shoddiness and brevity of memes work as a rough parallel for RAM’s expression of the fragility and misery of human life.

It will be up to future internet anthropologists to explain the explosion of Facebook meme pages over the last year and change (although this NY Mag primer is a great place to start). But for every potential object, attitude or obsession, there’s a page devoted to it in a way that smears distinctions of irony and honesty, authenticity and artifice, in devotion to the irreducible unit of virality.

Memes are endlessly malleable and transferable, an ideal chum for an internet powered by advertising. But while a thousand content marketers might search for ways to profit from the “Damn Daniel” moment, the transgressive, extreme tone of RAM inoculates it against co-optation. This is what authentic culture on the internet looks like in 2016.

Real Alcoholic Memes is holding down the low end of a flourishing ecosystem. For now.

“At the end of the day,” he says “if you can’t laugh at your bad decisions have you really learned anything?”