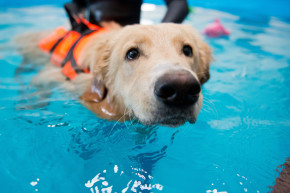 Therapy Dogs Team Up With Olympic Swimmers
By Robert Silverman 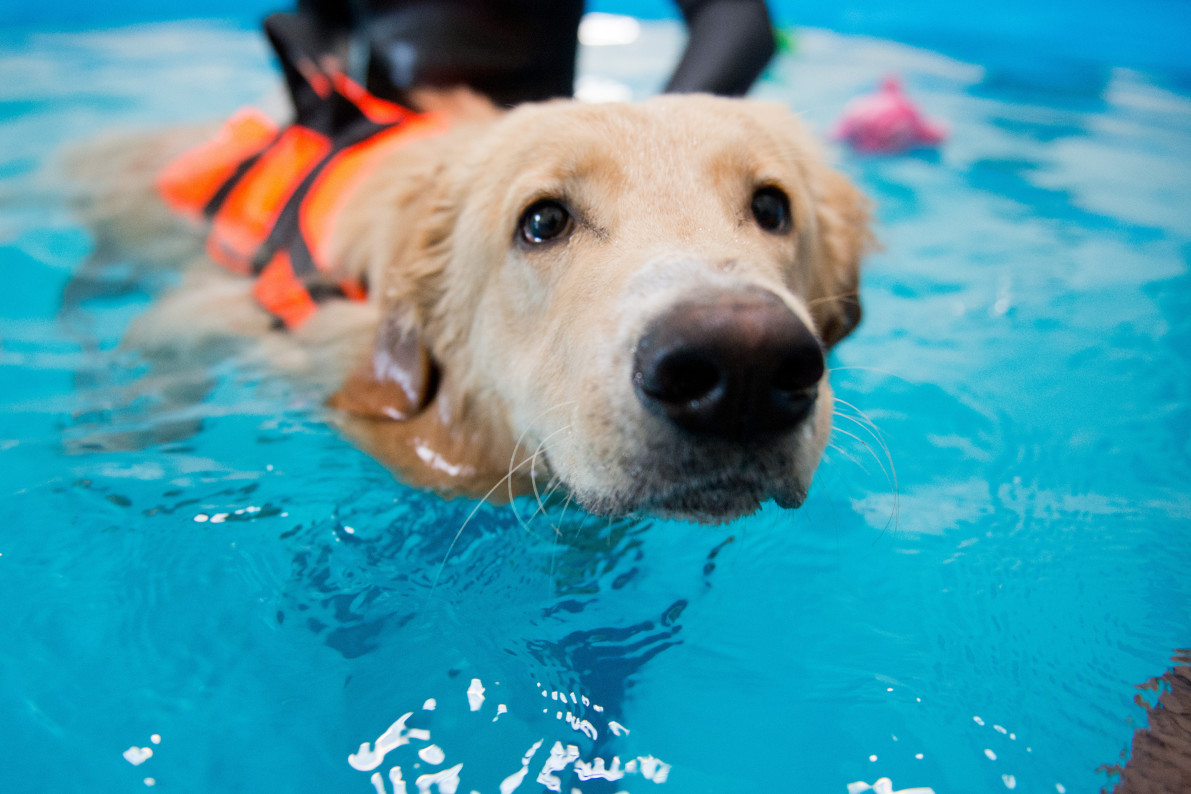 In Omaha, 1,700 American swimmers are currently competing in trials to winnow down the field for the 2016 Games in Rio de Janeiro. Naturally, it’s an anxiety-soaked experience, even before taking into account the odd mutilated corpse that could wash up on the beach, the ongoing financial crisis, the non-zero chance that you might get robbed at gunpoint or contract a nasty virus, the decimation of civil rights and imposition of a massive security and surveillance apparatus, the glorious opportunity to dive into waters jam-packed with fecal matter, and…

Luckily, the fine folks at Domesti-PUPS have got our jittery athletes covered, providing 30 therapy dogs to help soothe any rattled nerves, or simply give anyone who might need it the chance to run up and squish and hug and cuddle and love and maybe throw a ball with a very good dog wearing a collar that reads, “Please ask to pet me. I’m friendly.”

“Anywhere there’s an elevated level of stress, we can take our dogs and try to de-stress them,” Domesti-PUPS’ Sandy Ludwig told the Associated Press. “These dogs are just lying there, waiting to have their bellies rubbed or their ears scratched.”

But these good dogs aren’t just lolling about having fun; they’re putting in some serious work. The four-dog teams have been logging three-hour shifts over the course of the first seven days of the trials, working from morning till night, always at the ready to provide unconditional love. They’re also fitted with a lanyard containing security credentials and a photo, lest another, not nearly as awesome dog tries to snag this prime, athlete-helping gig.

“It just calms me down a lot,” one Olympic hopeful, Kacey Oberlander, said. “It’s nice to see the happy puppy dogs running around when everything is so intense and everyone’s so serious. The dogs are very happy all the time. It makes me calm.”

As the AP notes, therapy dogs are being put to greater use to treat a wide variety of individuals in high-stress environments, including hospitals, prisons, disaster-areas, and retirement homes. One competitor even felt that spending 20 minutes playing with her favorite therapy dog boosted her performance.

“About an hour later, she came back and said, ‘That was the best swim I ever had,'” Ludwig said. “She said, ‘I was so relaxed when I went and jumped in the pool.'”

You know, given that the situation in Brazil is only getting worse by the day, maybe the solution is to send as many dogs as possible to Rio. No, it won’t cure a single one of the Olympic Games’ many ills, but the chance to play with a smiling, cute-as-all-get-out-dog will at least make people feel a little better about the country being turned into hell on Earth.