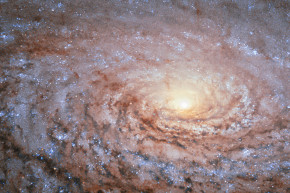 A Year Of Gorgeous Hubble Telescope Highlights
By Nick Hatcher

The Hubble Space Telescope has helped scientists discover more about the universe than our ancestors would have ever thought possible. It also takes some hella pretty pictures.

Recently, NASA announced it’s planning on extending the Hubble’s tenure until 2021, five years longer than originally planned. Here are some stunning highlights the telescope has captured in just the last 12 months.