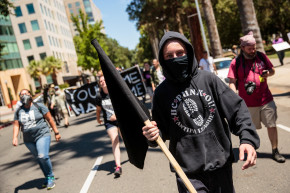 Bloodshed Was Always Part Of The Plan At Racist California Rally 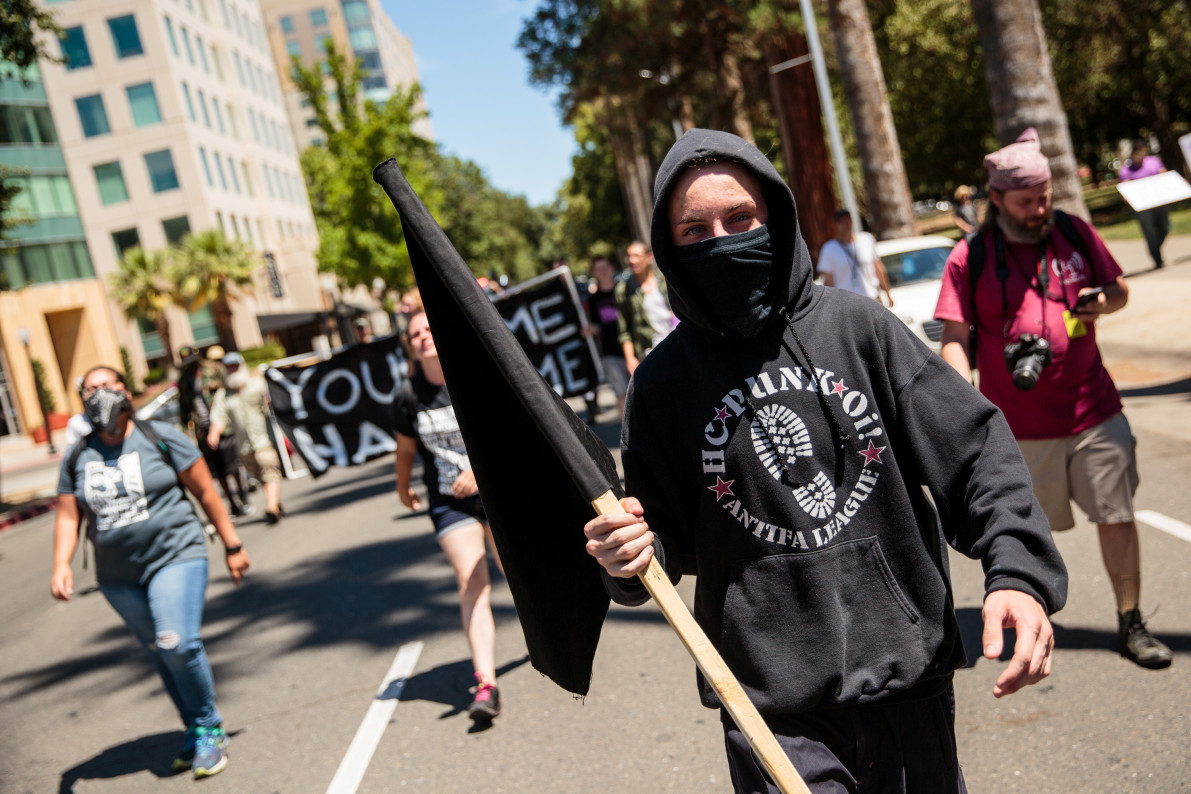 A white nationalist rally in Sacramento plunged into violence on Sunday after a group of counter-protesters showed up in an attempt to shut down the event. Skinheads and anti-fascists faced off outside the state Capitol, leaving blood splatters on the pavement and nearly a dozen people injured, some critically. The violence, however, may have been part of the plan. Both sides left a series of clues indicating that the event was never intended to be peaceful, with one side going as far as crowd-funding for hospital bills and bail money in the weeks leading up to Sunday’s protest.

A group that calls itself Anti-Fascist Sacramento started a crowd-funding effort about three weeks ago on Rally.org that called for donations to be used as an emergency fund.

“We are trying to raise money in the lead up to the counter demonstration to the neo-nazi rally on June 26th in attempts to establish a base fund just in case people get arrested or seriously injured on that day,” the group wrote in its online plea for support. “This way we are ready in case anything like that does happen on June 26th.”

The group, which sometimes goes by Antifa Sacramento, updated the crowd-funding page on Sunday, claiming that seven of their own were injured in the melee with members of the white nationalist Traditionalist Workers Party (TWP) before the rally was scheduled to start. At least 10 people were hospitalized—many of whom had multiple stab wounds, according to the Sacramento Fire Department, at least two of which were critical.

The Golden State Skinheads, who showed up at the rally to protest alongside the TWP, published a blog post on Friday that read like a war cry and a warning that they will not stand down to violence.

“The purpose of Sundays [sic] rally is simple: A peaceful demonstration on the principle that we, like everyone else has a right to stand and have our voices be heard,” the post read. “The countless threats of violence and attacks on our very lives will not deter us from attempting to achieve our initial goals. We aim to achieve them through legal and political aspirations yet we will not bend if violence is brought upon us.”

A similar rally in February also ended with injuries after white nationalists and anti-fascists crossed paths in Anaheim, California, including Will Quigg, a “grand dragon” for a California sect of the Ku Klux Klan. Vocativ first met Quigg in May while he was still wearing a cast for an injury he sustained in the February brawl.

“Whenever a counter group shows up there is potential for violence,” Marilyn Mayo, a research fellow with the Anti-Defamation League’s Center on Extremism, told Vocativ. The ADL keeps tabs on the country’s highest-profile hate groups.

The TWP was founded by Matthew Heimbach, a rising star in the white nationalist movement who Vocativ has covered extensively, and the ADL has been monitoring for the last few years. He said his intention with the TWP was to turn it into a legitimate political party for white nationalists who advocate for an all-white nation. Heimbach isn’t your run-of-the-mill, swastika-wearing, cross-burning bigot—he is far more dangerous, experts say, because he bridges the gap between the far-right Tea Partiers and unapologetic racists; his brand of bigotry is not-so-thinly veiled as patriotism and Christianity, which appeals to the far right. In a recent speaking engagement, Heimbach referred to presumptive GOP presidential nominee Donald Trump as “the gateway drug” to white supremacy.

Just some of our brave comrades preparing to march today in California. Hail the TWP and GSS. United, we will win! pic.twitter.com/NoaB72Ts4v

“What’s different about Matthew Heimbach is this: you have the tattooed racists who wear their hate on their sleeves,” the ADL’s Mayo said of Heimbach in a previous interview. Then you have the intellectual, business-suit racists like Jared Taylor (a Yale-educated white nationalist) who wouldn’t be caught dead with a white power tattoo. Heimbach is somewhere in between. He’s the youthful leader…he’s the bridge between hardcore racists and the intellectuals”

The details of the clash in Sacramento are still emerging. Heimbach reportedly was not in attendance, despite promoting the event aggressively on his social media pages and on his website. Heimbach did not immediately respond to Vocativ’s interview request.

CNN reported that the counter-protesters initiated the violence. At least one member of the activist group By Any Means Necessary (BAMN) was present at the rally. The group bills itself as an affirmative action coalition that fights for equality, but in a blog post before the rally, they indicated that they are not above violent means to achieve their goals.

“ We need to make clear to every fascist and fascist-sympathizer promoting white supremacy and racist violence that they will face militant, organized, and determined opposition. This is our fight to make and our future to win,” the post read.

BAMN member Yvette Felarca, who was at the rally, told the press that their violent reaction to the protest will prevent more violence from the racist groups.

“Mass militant action by an integrated group of people that mobilized here today that BAMN organized to shut them down, we succeed in doing that,” Felarca told reporters. “In the end, that’s going to stop and prevent more violence by the racists against our community.”

There were at least 300 counter-protesters, according to CNN, who cited information from California Highway Patrol spokesman Officer George Granada. “They were positioned around the Capitol to stop them (TWP demonstrators) from carrying on their permit.” he said.

The TWP was clearly outnumbered as they gathered near the capitol, Granada said.

“At that point the word spread pretty quick and a mob ran in that direction and they clashed immediately with each other,” he said.

Despite being outnumbered, however, the TWP published a blog post on Sunday that claimed victory in the clash and asked for donations to help their injured. They also praised their “comrades” the Golden State Skinheads’ “courageous warriors.”