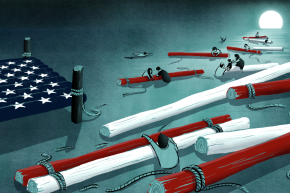 These Are The Immigrants Donald Trump Wants To Deport 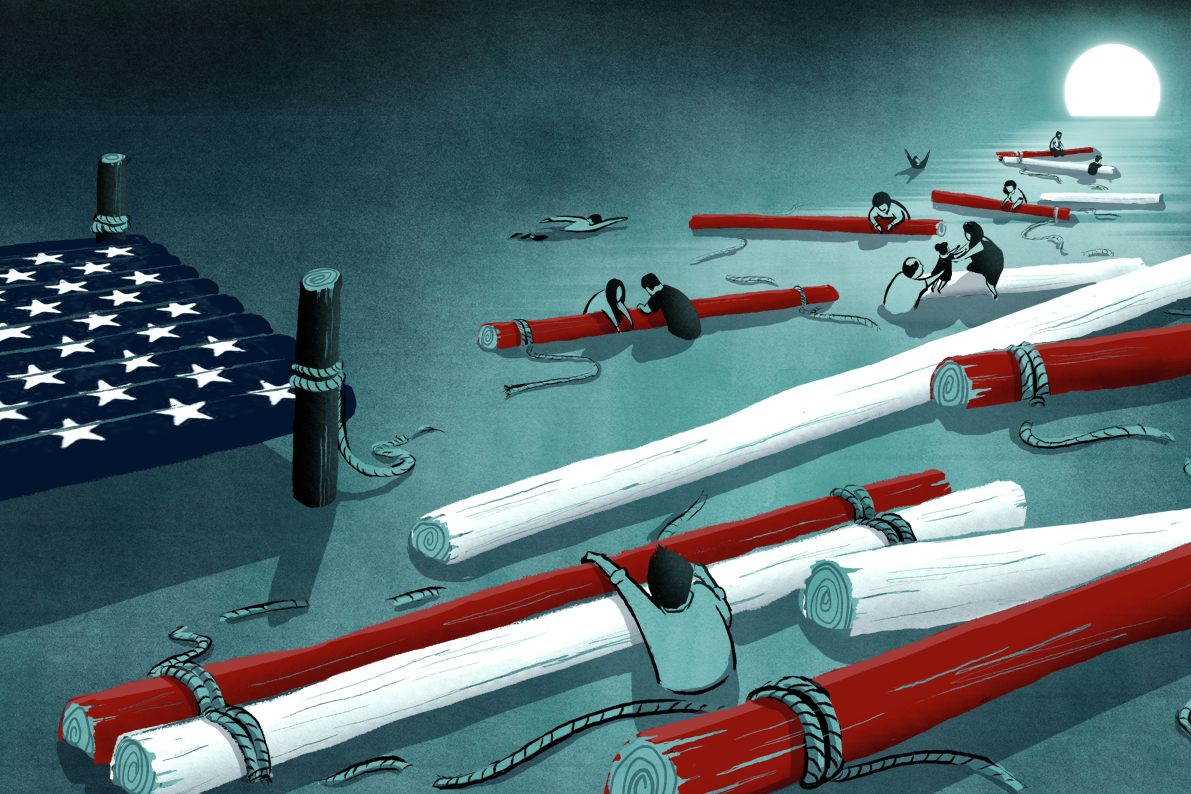 Eddie’s 35 years old. He’s been in the U.S. since he was a kid and now has a one-year-old daughter, a wife he’s been with for 14 years, no criminal record, and holds two master’s degrees in math and economics from California State University at Los Angeles. He’s also one of roughly 11 million “illegals” that Donald Trump wants to round up and deport.

Trump gave a much anticipated speech in August that was supposed to outline his plan to thwart illegal immigration — the faulty cornerstone of his floundering bid for the presidency. He offered little more than the same rhetoric that has fired up his base for the last year, and nothing resembling an actual plan.

In his speech, he doubled down on his dreams of forming deportation goon squads to collect people in the country illegally and boot them back across the border. He talked about ending the “catch and release” of undocumented immigrants, which officially ended in 2006, under the Bush administration, but is still in practice under President Obama. He pledged to get rid of Obama-era executive orders that would have allowed people like Eddie to remain in this country without fear of being deported over something as insignificant as a traffic ticket, despite the fact that the Supreme Court failed to ratify the president’s plan earlier this year.

“Let’s go and have some fun tonight,” Trump said before delivering his speech. “In the end, we’re all gonna win.”

Eddie paid for his education on his own, he told Vocativ in an interview. Despite his advanced degrees, Eddie, which is not his real name, has trouble finding steady work that’s satisfying for a person with his level of education. This, he said, is almost exclusively due to his less-than-legal immigration status. He wants to get a PhD, but that’s not in the cards for people like him.

“My dream was to get a PhD in economics, but being undocumented…makes it nearly impossible,” Eddie said. “I wanted to go to a top 20 program, so I decided to make my profile as competitive as possible. I got another master’s degree in mathematics and took the most difficult math classes that I could find. But at the end of the day [if you’re in the country illegally] you can forget about that PhD.”

Eddie’s story is not uncommon — he was brought here as a child by no fault of his own. He worked hard and has become a productive member of society — as much as society will allow him without his running the risk of getting dragged back to a country he barely knows. And that’s if he gets so much as a speeding ticket. Other successful undocumented immigrants have made headlines in recent years, including a Pulitzer Prize-winning journalist and the valedictorian at Arizona State University. The stories of how these people ended up in the U.S. are often similar to Eddie’s. These are the people Trump wants to uproot from their lives and deport.

Eddie was eight years old when his family paid a coyote a few hundred dollars to take him from Leon, Guanajuato, Mexico, across the border to join his parents — who already were in the U.S. working illegally — more than 1,500 miles north in California. He crossed over into California into a mountainous area in San Diego nicknamed “El Cerro” (The Hill) – a popular spot at the time for immigrants to enter the U.S. illegally.

“El Cerro is not a hill,” Eddie said. “At least from what I remember. It felt more like patches of wilderness – you pretty much just run from bush to bush as the [Immigration and Customs Enforcement] helicopters fly overhead. You’re just running and running and running and hoping you’re not caught. I laugh about it now but it was real scary, man.”

Eddie’s been running ever since.

Trump’s border-hawk stance on immigration is just the latest attack on productive members of society who happen to be in the country illegally.

The Supreme Court in June failed to reach a majority opinion on a collection of Obama’s executive actions that would have shielded people like Eddie from deportation and allowed them to work legally in the U.S. Since the high court failed to reach a majority opinion, a ruling from an appeals court blocking the president’s actions was left in place — and as many as five million people who would potentially qualify for the plan continue to live in fear of deportation. With just four months left in office, Obama said he won’t again attempt to implement policies to ease the strain on undocumented immigrants like Eddie, which means any attempt to create similar programs will fall in the lap of the next president. If that president is Donald Trump, guys like Eddie are toast.

Eddie was optimistic that the Court would rule in favor of the president’s plan, Deferred Action for Parents of Americans and Lawful Permanent Residents, or DAPA, a plan that seemed reasonable and was supported by the majority of the people in the U.S. — according to a January Reuters poll, 61 percent of Americans are in favor of policies like DAPA that relax immigration restrictions on certain immigrants. Despite the public support, Eddie still lives in fear.

“My biggest fear is being separated from my girls. I’ve been with my wife for fourteen years, and during those fourteen years we have not been apart for more than a day or two,” he said. “Now we have a beautiful daughter. It is just inconceivable that I could be without them for ten years or more. If you’ve been in the US for over a year and you leave, or get kicked out, you trigger the ten year bar. Can you imagine being apart from your family for ten years or more?”

More Valedictorian Chased Off Twitter By Trolls Angry About Immigration

David has been an ICE agent for about 11 years, most of which were spent patrolling the U.S.-Mexico border in Arizona. He spoke with Vocativ on the condition of anonymity because he is not authorized to speak with the media. He said that not all immigrants are the “rapists” and “murderers” the GOP presidential candidate would have you believe them to be. But they’re not all college grads like Eddie, either.

“Look, some of these people are pretty awful — drug dealers, gang members, etc.,” he said. “I’m happy when I find those people — that’s why I go to work. I get no joy out of taking a guy like the man you described (Eddie) from his family. I don’t think too many of my colleagues do either. But it happens. That’s the law right now and it’s our job to enforce it.”

He added, “at some point, though, we have to look at a guy like (Eddie), who’s basically lived here his whole life — who’s gone to school and done everything right – and say, ‘are these really the people we want to be rounding up and deporting?’ I mean, what the fuck are we doing?”

No. 3 of Trump’s 10-point plan calls for tripling the number of deportation officers, but he makes no mention of how he plans on paying for it. In fact, with the exception of the border wall that he says Mexico will pay for, Trump provided few details on how any of his so-called immigration policy will be funded.

More The Truth About Immigrants And Crime In The US

The risks are everywhere — from driving, to applying for a job that requires a background check, people like Eddie face deportation at almost every turn. Many people in Eddie’s situation are prime targets for crime because their immigration status makes them reluctant to call police.

“I don’t get on planes because I run the risk of being detained,” he said. “I can’t legally get a job. As a matter of fact, short of starting your own business, it is nearly impossible to get a good paying job because you have to do a background check…the best way to describe my life is that I have to live in the shadows.”

The best way to describe my life is that I have to live in the shadows. – Eddie, undocumented immigrant from Mexico

Alejandra Sanchez has been living in the U.S. illegally for 16 years with her husband and five children, one of whom was born in the U.S. and would allow her to qualify for DAPA. Her husband was already in the U.S. when she and four of her children made the trek through the Arizona desert to meet him in Phoenix. She echoes Eddie’s fears of doing daily tasks like driving and going to government offices. The immigration status of Sanchez and her family makes owning their own auto mechanic business “dangerous.”

“[If] my husband is going to have a small business to allow us to eat… they’re asking for [immigration] documents from all the businesses all over,” she told Vocativ through an interpreter. “And my husband was unemployed for a year. Luckily we survived, but we failed a lot. And because of this my husband had to work on his own because he couldn’t find work. This is one of the things, we need to work to survive to bring bread to our children at home.”

Lenka Mendoza, a Peruvian immigrant in Virginia who came to the U.S. 16 years ago with her husband and two small children, shares Eddie and Sanchez’s constant fear.

Mendoza first came to the U.S. with her family on a work visa. The visa expired, however, and the family didn’t want to return to Peru because of an ongoing civil war that began in 1980 and has claimed as many as 70,000 lives. Rather than risk their lives in a war-torn country, the family stayed and Mendoza went to school for business administration. She’s been working as a hotel supervisor about 40 miles south of Washington D.C., where she’s had trouble finding reasonable housing for her family due to her immigration status.

Trump’s plan leaves people like Eddie, Lenka, and Alejandra in the shadows. His gotta-break-some-eggs approach to immigration reform ignores the reality that not every undocumented immigrant came to the U.S. to rape women and sell drugs, or to exploit the system — or that they even had a choice about whether they were brought here in the first place.

“There’s no amnesty,” Trump said of his plan in an interview with Anderson Cooper last week. “And if someone wants to go the legalization route, what they’ll do is they’ll go leave the country, hopefully come back in, and then we can talk.”