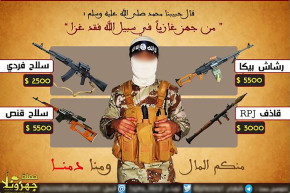 The campaign aims to collect money for RPGs, machine guns, and sniper rifles for fighters in the Gaza Strip 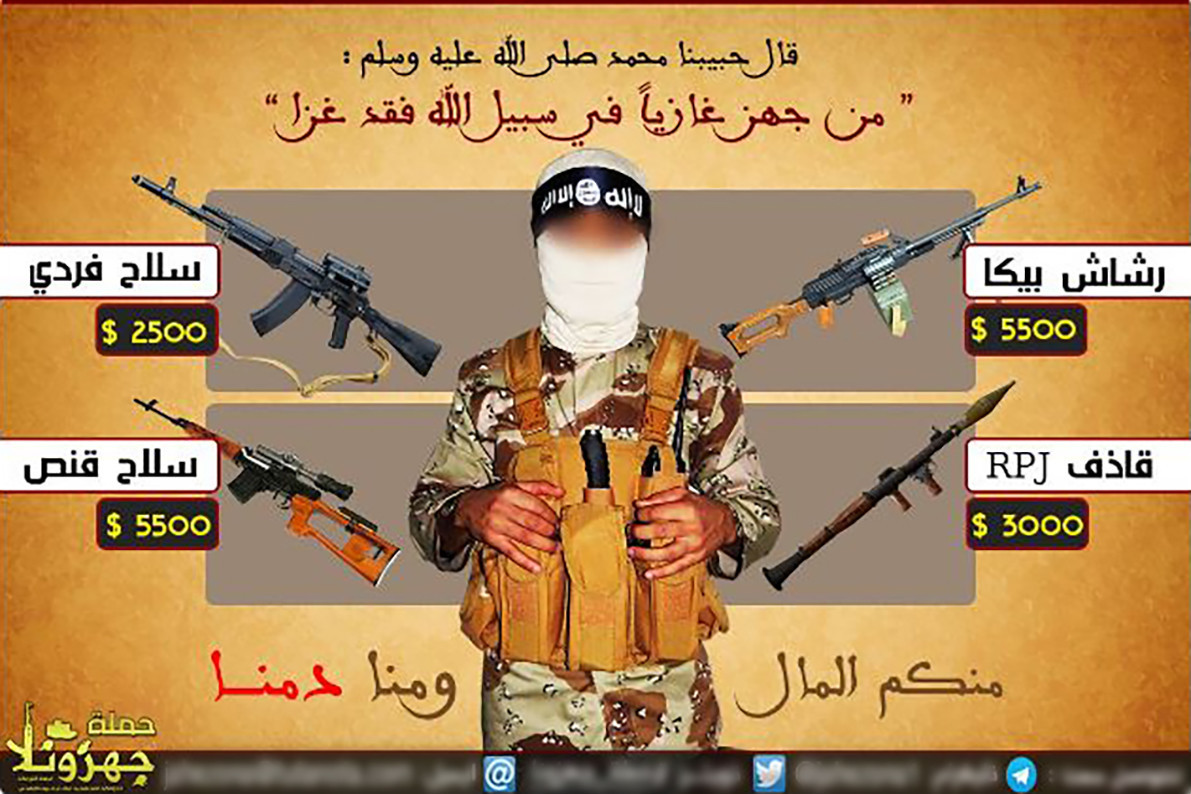 An ISIS-affiliated group operating in the Gaza Strip launched a robust online campaign urging its supporters to donate money for firearms and explosives, Vocativ discovered.

Called the “Campaign to Prepare Us” and boasting the slogan “you bring the money, we bring the blood,” the initiative urged Muslims to participate in “Jihad Bil Maal”—a form of jihad focused on donating rather than fighting. “He who equips a fighter in the way of Allah is as if he has taken part in the fighting himself,” says an image advertising the campaign that was posted on Twitter.

The campaign, which claims to be Gaza-based, was advertised with the help of the hashtag #حملة_جهزونا, Arabic for the campaign’s name, and included a series of videos and images distributed across Twitter and Telegram accounts specifically dedicated to the effort. Images called for donations to help militants in Gaza buy everything from RPGs to sniper rifles and machine guns. According to pictures advertising the campaign, they cost thousands of dollars each to purchase.

One video bearing the campaign’s name and logo that was posted on YouTube also offered a glimpse into other ways donation money could be used: to help militants manufacture explosives. The nine-minute clip claimed to show militants in Gaza manufacturing IEDs in what appear to be workshops for weapons. The video depicted a militant making a bomb that sends bullets in all directions, and putting an explosive device in the trunk of a tree and detonating it—an apparent effort to demonstrate an attack tactic.

Information being distributed about the initiative, however, didn’t explicitly state how donations could be made, although much of the content included an email address—specifically a Tutanota address—and an affiliated Twitter handle.

A screenshot from the video showing militants making an IED.

But the group is affiliated with ISIS. For at least the past two years, for example, it’s been active on ISIS forums, although it hasn’t officially pledged allegiance to the Islamic State. This week’s campaign was also advertised on ISIS’ online forums and on ISIS’ social media accounts, including several of them on Telegram and Twitter, Vocativ discovered.

It was additionally advertised with hashtags about Ramadan, the ongoing Islamic holy month in which it is common for Muslims to donate money and food to those in need.

Similar efforts have surfaced before. In November last year, a campaign that surfaced on Telegram sought to rake in cash for rockets, machine guns, and anti-tank missiles, seemingly for fighters in Gaza.

The latest campaign is a clear sign that accounts affiliated with militants are continuing to thrive despite efforts by major tech companies, including Telegram and Twitter, to fight them. Some Twitter accounts advertising the campaign, however, were removed from the social media platform by early Tuesday morning.