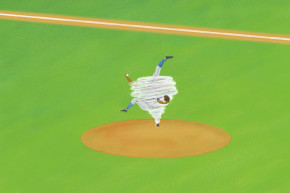 Why Does Any Pitcher Use A Windup?
By Joe Lemire

Why Does Any Pitcher Use A Windup?

A case for full-time use of the stretch based on biomechanics, data, and evidence 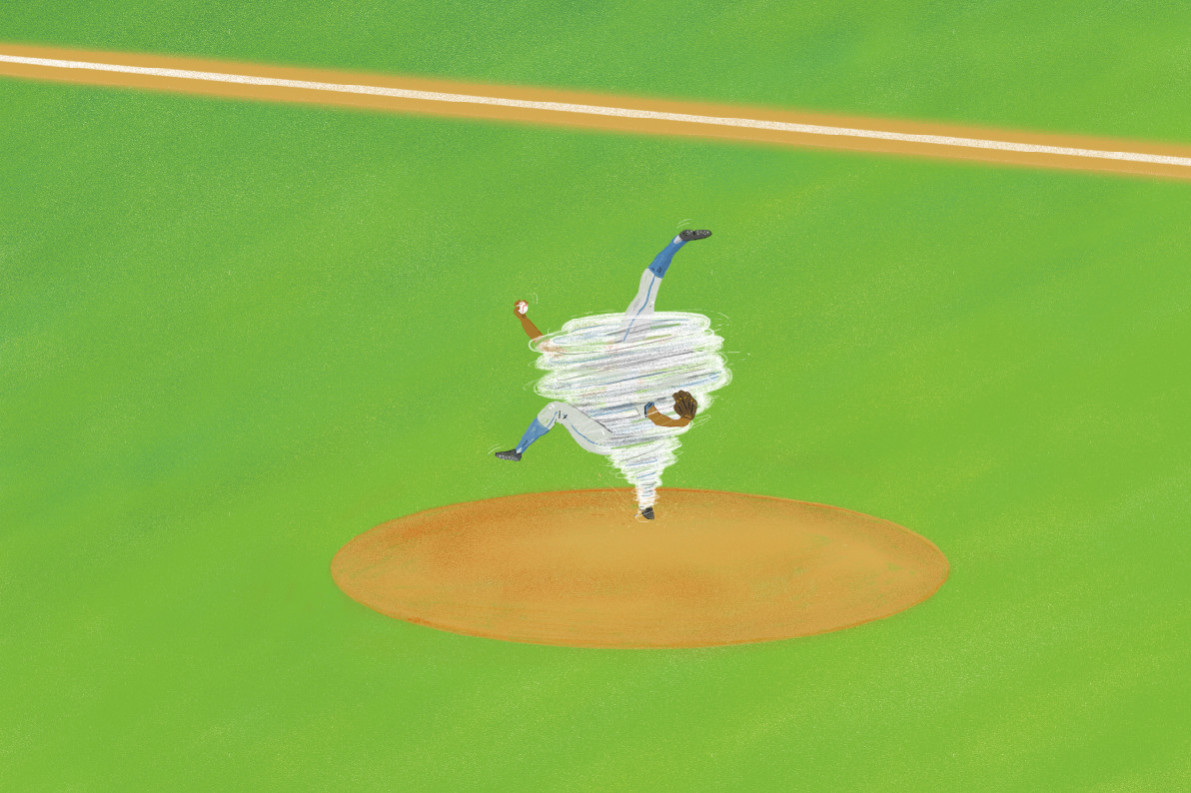 Before he became arguably baseball’s best reliever, Andrew Miller was just trying to make the Boston Red Sox’ Opening Day roster. This was spring training in 2012, and the former top-10 draft pick had a career earned run average of 5.79. During a bullpen session, the 6-foot-7 left-hander was struggling to corral his lanky body and settle on a consistent motion when pitching out of the windup, the choreographed sequence of steps by which a pitcher rocks sideways or backwards to build momentum before a pitch.

Miller working from the windup in 2011.

To simplify his mechanics, Miller decided to switch to the stretch, a reduced and halting motion used with runners on base. His first pitch was right on target and popped the catcher’s mitt. His manager at the time, Bobby Valentine, took immediate notice.

“What the hell are you doing the rest of this stuff for?” Valentine said. “That’s how you’re going to throw every pitch this year.”

Rather than learn and hone two separate types of mechanics—the stretch and the windup—Miller could streamline his long-limbed contortions and focus only on the stretch. Valentine said the windup was, by then, “an archaic idea.”

“Why not? What do I have to lose at this point?” Miller recalled thinking. “I don’t want to go to Pawtucket [in the minor leagues]. If he says do it, I’m going to do it.”

Since the start of 2013, Miller has a 2.01 ERA and has struck out 14.9 batters for every nine innings pitched, nearly doubly the league-wide average of 7.7 K/9 during that time.

Miller working from the stretch in 2016

Miller has become an anti-windup zealot and he has company. In that same 2012 season Miller went stretch only, Yu Darvish arrived from Japan to pitch for the Texas Rangers and quickly scrapped his windup. It’s more common for Japanese pitchers to do so, which informed Valentine’s encouragement of Miller. (Valentine managed the Chiba Lotte Marines for seven years.)

Darvish working full-time from the stretch

Darvish’s pitching coach in Texas, who now holds that position with the Washington Nationals, was Mike Maddux, who recently said, “The most important pitches we make in a game are out of the stretch, so you’d better have the stretch wired, man,” he said. “You’d better feel good about that.”

Maddux’s brother, the Hall of Fame pitcher Greg Maddux, famously threw 90 percent of his warmup-pitches from the stretch, rather than his windup. The reason, he’d explain, is that he’d be delivering the ball from stretch in all of the game’s highest-leverage situations—when there were runners on base.

At times, the former San Francisco Giants’ two-time Cy Young winner Tim Lincecum used only the stretch, as did Ubaldo Jimenez during most of his no-hitter with the Colorado Rockies. Other notable pitchers and prospects have reduced their windups to being near replications of the stretch deliveries. Among them is one of baseball’s current pitching phenoms.

“Just trying to keep things as simple as possible,” the Mets’ Syndergaard, the hardest-throwing starter in baseball, said. “It’s all just minimizing the amount of movement you have in your mechanics, and it’s really paid off.”

There is a long-standing supposition persisting in the baseball community that pitching out of the stretch causes more arm strain and reduces velocity, two postulates we now know—thanks to science—are false. Famed orthopedic surgeon Dr. James Andrews and his Ph.D. research director at the American Sports Medicine Institute, Glenn Fleisig, conducted a biometric analysis of 28 professional pitchers throwing from the windup and stretch.

The research, published in Nov. 2007, concluded, “The pitching biomechanics between the wind-up and stretch fastball showed no statistical differences in joint kinetics, kinematics, or timing, and clinically insignificant differences in ball velocity.”

Fleisig later explained that, though the two pitching deliveries start very differently, “the high forces and torques and rapid body motions occur after the instant of foot contact.” Though the prelude to foot contact differs, the study found that both motions had the same lead-foot extension and same external shoulder rotation at that moment. The velocity difference was less than a half-mile per hour, changing the hitter’s reaction-time by 0.002 seconds.

“Obviously there was always this idea of rhythm and relaxation that the windup could give to the body, and there’s also a misconception that you can get more power by throwing out of the windup,” Valentine, now the athletic director at Sacred Heart University, said.

“It’s hard to deal with folklore when you’re trying to deal with the laws of physics or the mechanics of the sport.”

The question lingers: Why use the windup at all?

“That’s a good question, I don’t know,” Mets pitcher Logan Verrett said. “That’s how I was always taught, so it’s just kind of force of habit now. Growing up, we were taught to throw out of the windup with nobody on and out of the stretch with guys on. It’s what I’ve always done. It’s what I know.”

“Just the rhythm of being in the windup definitely makes you more comfortable,” Nationals pitcher Tanner Roark said.

“I use it because I feel more comfortable with a higher leg lift,” veteran pitcher Chris Capuano, now with the Milwaukee Brewers, said. “You feel like you get a little more of a load with your weight back over the rubber.

“If pitching out of the stretch were just as comfortable, then I would pitch out pitch out of stretch all the time.”

But what about a hitter’s comfort? There’s no consensus among batters as to whether it’s easier to track the ball when a pitcher is throwing out of the windup or stretch, but several hitters, such as the Milwaukee Brewers’ Aaron Hill, a former All-Star with nearly 1,500 career hits, said the stretch can be more disruptive.

“Your timing gets messed up,” he said. “When you’re in a windup, you have all this”—Hill mimed the motion—“and that’s a hitter’s time to gently get into their load, their trigger, whatever it is they do before [a pitch] as opposed to if it’s here”—he replicated a stretch position—“you’re sitting there waiting and, boom, you don’t know when they’re going to go [to the plate]. It’s all timing.”

“The stretch can be a little tricky, with slide steps and whatnot,” White Sox leadoff hitter Adam Eaton said. “As a hitter, [facing] a full, smooth windup doesn’t put you at ease, but it allows you to really gather and have good timing. When guys are herky-jerky or have some more sharp edges to their windup and/or their delivery out of the stretch, it can be a little tricky.”

Pitching out of the stretch offers the advantage Hill is describing: increased unpredictability. Few modern pitchers have truly unique windups, so the stretch offers more opportunities to deceive a hitter, by pitching with a slide step, a high-leg kick, or something in between. White Sox pitching coach Don Cooper said he has his pitchers practice the stretch more often, “at least 60-40,” but does like the variety of both.

One of the few full-time relievers that does still use the windup is Angels closer Huston Street, a 12-year veteran with 322 career saves. Street said he has convinced himself that pitching out of both the windup and the stretch varies his delivery enough that “it creates some sort of an advantage” over the hitter.

Despite coaches from several organizations peppering him with questions about his windup—queries that disappear as long as Street keeps getting outs—he has vowed not to change, at least not unless he could revert to childhood and begin anew.

“If I was going to start over—all the way over—I would only pitch out of the stretch, no questions asked,” Street said.

Tradition, more than anything, predicates windup use, Maddux said. Valentine called it a personalized “signature” much as a hitter’s batting stance achieves the same individuality while accomplishing nothing helpful in baseball.

Many pitchers who use a windup will pause in the midst of it, thus deriving no benefit of momentum and essentially wasting a lot of activity. Miller offers another theory why the windup has persisted: machismo.

“The guys that completely stop, what is the point of doing the beginning?” Miller said. “All you’re doing is giving yourself time to get out of whack and screw up.

“I do think people are embarrassed to go out there and pitch just out of the stretch.”

The Nationals’ Shawn Kelley, like most relievers, scrapped his windup altogether when moving full-time to the bullpen in order to be as prepared as possible when entering the game with inherited runners on base. That said, he advocated for pitchers to do what feels best.

“If you’re golfing on a par 3, a lot of guys like to just hit it off the ground because that’s kind of ‘how you hit your irons,’” Kelley said. “Some people say, ‘Well, if you have the ability to use a tee, use it.’ So I say, If you do like the windup—if you just like the momentum and the rhythm of it and have the ability to do it with no one on base—then why not take advantage of it? Put out your tee and use it because you can.”

An examination of regular starters and relievers from the 2015 season suggests there is no change in performance or effectiveness when working out of the stretch as compared to the windup.

When starting pitchers worked with no one on base (when they can be assumed to be using the windup), they allowed an OPS (on-base plus slugging) that was 40 points lower than when runners were on base. Lest you think they were pitching worse out of the stretch, however, consider that relievers (who always use the stretch) saw their OPS against rise by the same exact margin of 40 points when pitching with runners on.

There is a movement afoot to reduce the complexity of the windup, if not essentially eliminate it, and Miller predicts there could be dozens of followers in the years to come, especially as biomechanics become more prevalent and accepted.

“You can tell a lot of guys are starting to really limit their windups, like Noah’s one of them,” Verrett said of his teammate, Syndergaard. “It’s very minimal what he does in the windup now. Compared to what he does in the stretch, it’s almost the same.”

Valentine’s favorite anecdote on the topic is that of Hideo Nomo’s no-hitter at Coors Field in 1996, his second big league season. Nomo had been NL Rookie of the Year with the Dodgers and finished in the top-five in Cy Young voting each of his first two years in the majors—success many ascribed to his unorthodox windup. Pitching on a wet mound, however, forced Nomo to abandon his windup in the fourth inning and complete two-thirds of his no-no in baseball’s most notoriously hitter-friendly park while throwing strictly from the stretch.

“His pitches, not his windup, made him effective,” Valentine said.