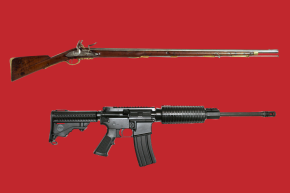 Did the Founding Fathers have these kind of civilian killing machines in mind back in 1791? 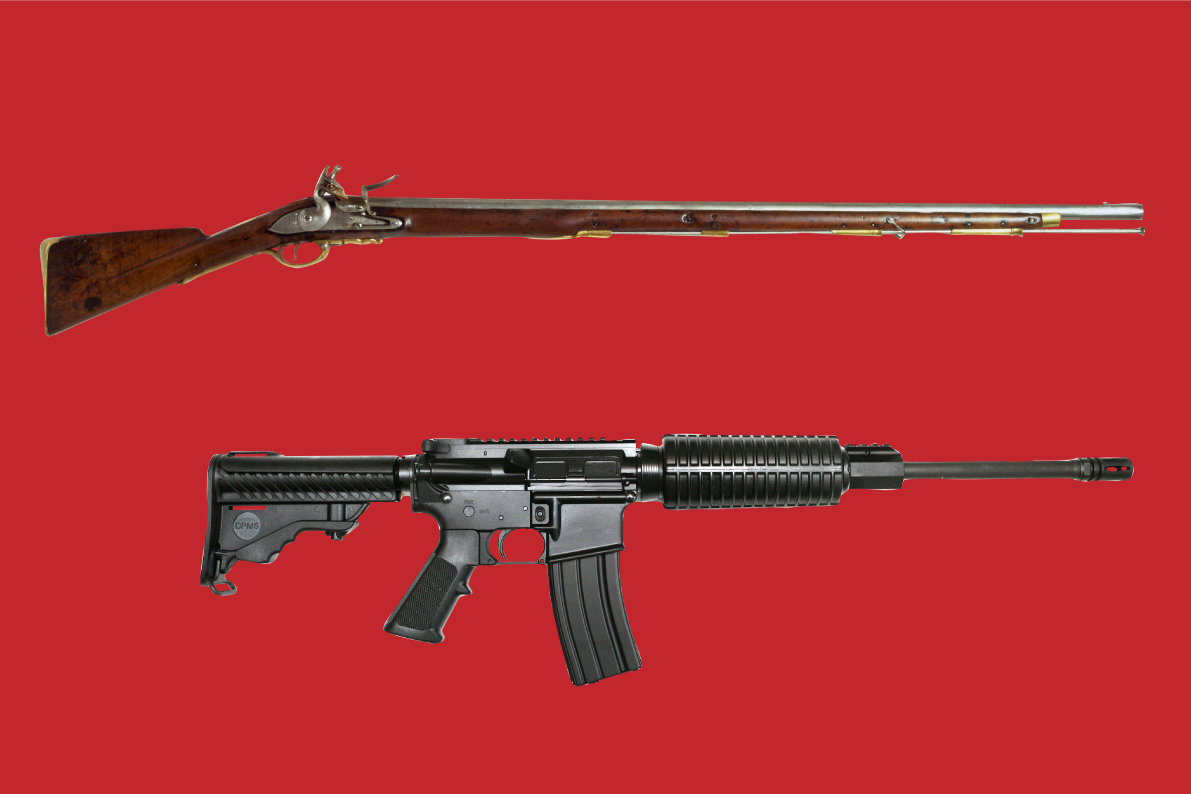 As after any major shooting incident, the Second Amendment to America’s constitution is once again the subject of a major national debate. The amendment, which famously guarantees your right to “keep and bear arms,” was penned in 1791 by our Founding Fathers, who—after being routinely disarmed by the English in the 18th century—wanted to prevent more federal government encroachment. At the time, it was immensely sensible.

Now, more than 200 years later, the world certainly has changed. But questioning the wisdom of that amendment is political sacrilege, no matter which side of the spectrum you’re on.

The rifle of choice back in the late 18th century was the Brown Bess, a flintlock musket that was widely used by both sides during the American Revolutionary War. It wasn’t the most efficient weapon; a trained marksman could fire about four bullets a minute and had to manually reload after each shot. Essentially, if someone missed on their first shot, you had an opportunity to escape—or even run up to your attacker and punch him in the face.

Fast forward to 2016, and Americans’ preferred muskets are increasingly AR-15-style assault rifles, which can be legally modified to fire upwards of 850 rounds per minute. When you juxtapose the guns for which the Second Amendment was written with today’s weapon of choice, it’s reasonable to wonder if the law should evolve to keep pace with the objects it is meant to regulate.

Produced by dozens of companies both here and abroad, “America’s Rifle” (1 in every 4 guns made in the U.S. today is an AR-15) is favored for its versatility and endless modification options. It’s popular among sport shooters, the military, and people who want to kill a lot of people in a short time frame. It was used to slaughter 50 in Orlando. It helped kill 14 in San Bernardino. In Aurora, a man armed with an AR-15 killed a dozen people in a packed movie theater. Adam Lanza chose an AR-15 when he gunned down 28 people, including 20 kids, in Newtown.

An AR-15 is a semi-automatic, which means each shot requires an individual pull of the trigger. But as Slate noted in 2013, there’s a simple, affordable add-on that essentially turns AR-15s into a fully automatic assault rifle. Watch how fun (and terrifying) it looks.

This version is equipped with a “bump stock”, an easily-assembled assault weapon modification that uses the recoil of one shot to pressure the trigger for the next one. Slide Fire Solutions, a company that that specializes in bump fire stocks further detailed the process in 2013. “As a result of the forward movement required to discharge each round, the shooter naturally corrects their point-of-aim for each shot and prevents recoil from pushing the firearm’s muzzle upward in an unsafe direction,” Slidefire said on its website.

If you’re thinking this is illegal, guess again. Slide Fire even proudly displays a letter from the Bureau of Alcohol, Tobacco, Firearms and Explosives confirming its legality. Since the stock contains no automatic functions, “it is not regulated as a firearm under Gun Control Act or the National Firearms Act,” the letter reads. The shooter technically pulls the trigger each time a bullet leaves the chamber, hence the weapon is allowed for civilian use.

It’s very hard to argue that any civilian needs a gun that can spray bullets at this speed, but because of that beloved amendment, penned in 1791 and still interpreted in its literal form despite 225 years of firearms evolution, the AR-15 remains startlingly easy for most people—including the man who opened fire in an Orlando club Sunday—to get.