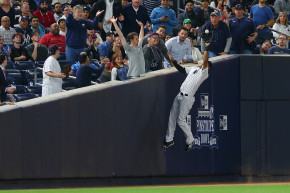 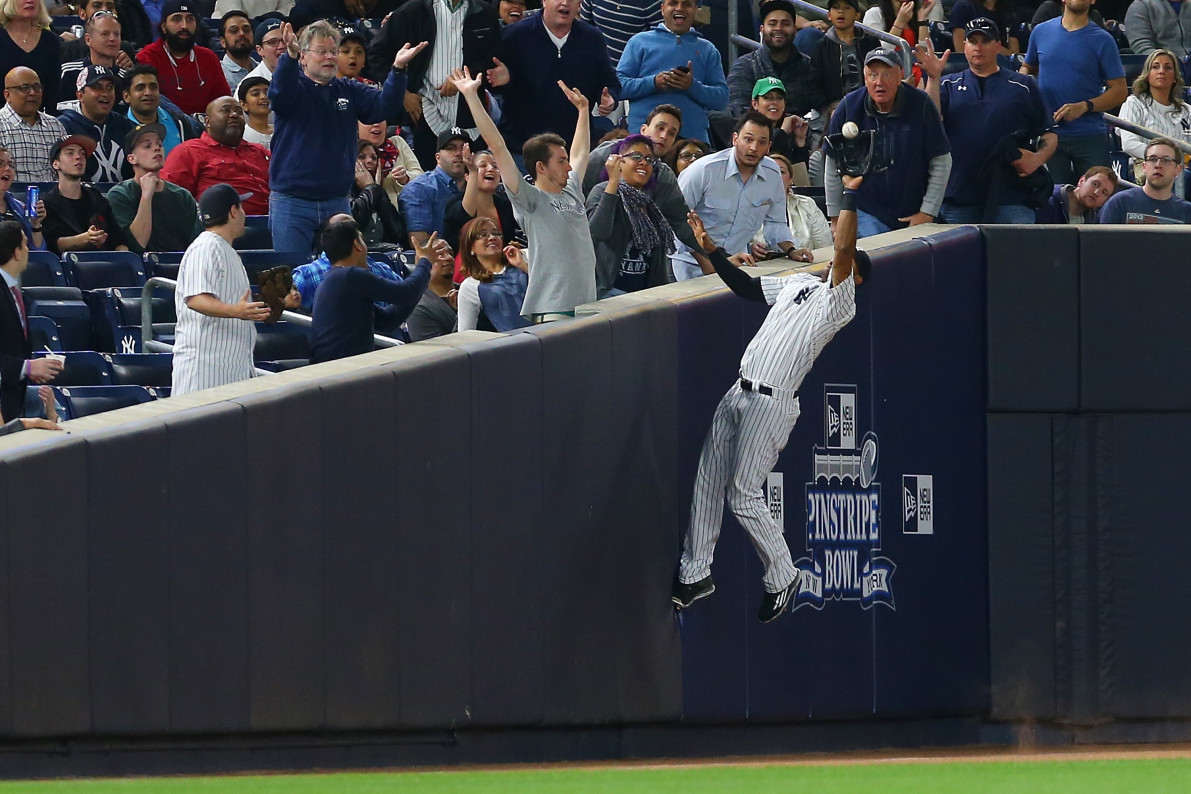 “For me, I want to get my exchange here to here—[mimed ball removal from glove]—as fast as possible,” he said. “That way I can get rid of it at a faster time, plus arm strength, equals better chance of throwing guys out. I don’t think too much about trying to throw it harder and focus more on trying to be accurate.”

Hicks is the only man in recorded history to throw a baseball faster than Aroldis Chapman—his teammate, who threw a pitch 105.1 mph and had that number tattooed on his wrist—and appears four times on MLB Statcast’s top-15 hardest outfield throws this season (at Nos. 1, 5, 6, and 14).

On April 20 this season, he launched a ball 105.47 miles per hour from 246.6 feet away to throw out the Oakland A’s Danny Valencia, who peaked at a 20.4-mph running speed while scampering 90 feet to home plate. It can be reduced to one of those age-old word problems about two trains traveling at different speeds, and how long before the faster train catches up to the slower train—in this case, the competition is as fair as a bullet train overtaking The Little Engine That Could. Here’s the full Statcast rendering of the play:

Here’s an MLB-created GIF that you can watch endlessly to make yourself feel happy.

While many outfielders are taught to crow-hop—a technique in which the player takes a short jump forward while coiling to throw—Hicks prefers to keeping running to gain ground and “push myself forward as I’m throwing” in about one and a half steps (i.e. one full step forward and a release while making the second). He aims for the cutoff man and lets his ball hop once before safely reaching the catcher’s mitt.

“Sometimes my ball tends to rise,” Hicks said. “For me, I aim chest-high and hopefully that’ll create a good one bounce to wherever I’m throwing.”

Hicks, who hit 98 off the mound as a high-school pitcher, said he always had the best arm of any team he was on growing up but didn’t realize just how precocious he was because one of his childhood friends was Anthony Gose, a Detroit Tigers outfielder who had the 10th-fastest throw this season at 99.34.

The second-fastest throwing arm in the majors belongs to the Boston Red Sox’ Jackie Bradley Jr., who hit 101.3 mph (although that throw was offline and didn’t get anyone out) and also appears at 13, 21, and 22 on the Statcast leaderboard. He did throw out an Oakland runner at the plate with throw No. 22, which traveled 98.23 mph all the way from centerfield to the catcher without a bounce.

The No. 3 throw, by the Pittsburgh Pirates’ Starling Marte, did record an out as he fired the ball 100.6 mph for 232.3 feet to nab the Colorado Rockies’ Dustin Garneau at the plate.

Few runners have tried to advance an extra base when Hicks is throwing—he only has two outfield assists—but Marte is tied for the major league lead with seven. He sits alongside the Chicago White Sox’ Adam Eaton and the Houston Astros’ Colby Rasmus, neither of whom have top-25 throws this year. Velocity is certainly not the only determining factor in outfielders hunting runners, but it’s definitely the most dramatic.