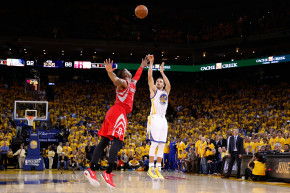 This Robot Will Fix Your Jumper… And Eventually Destroy Us All

Wanna shoot like Stephen Curry? This app and robot combo will help, if you're any good 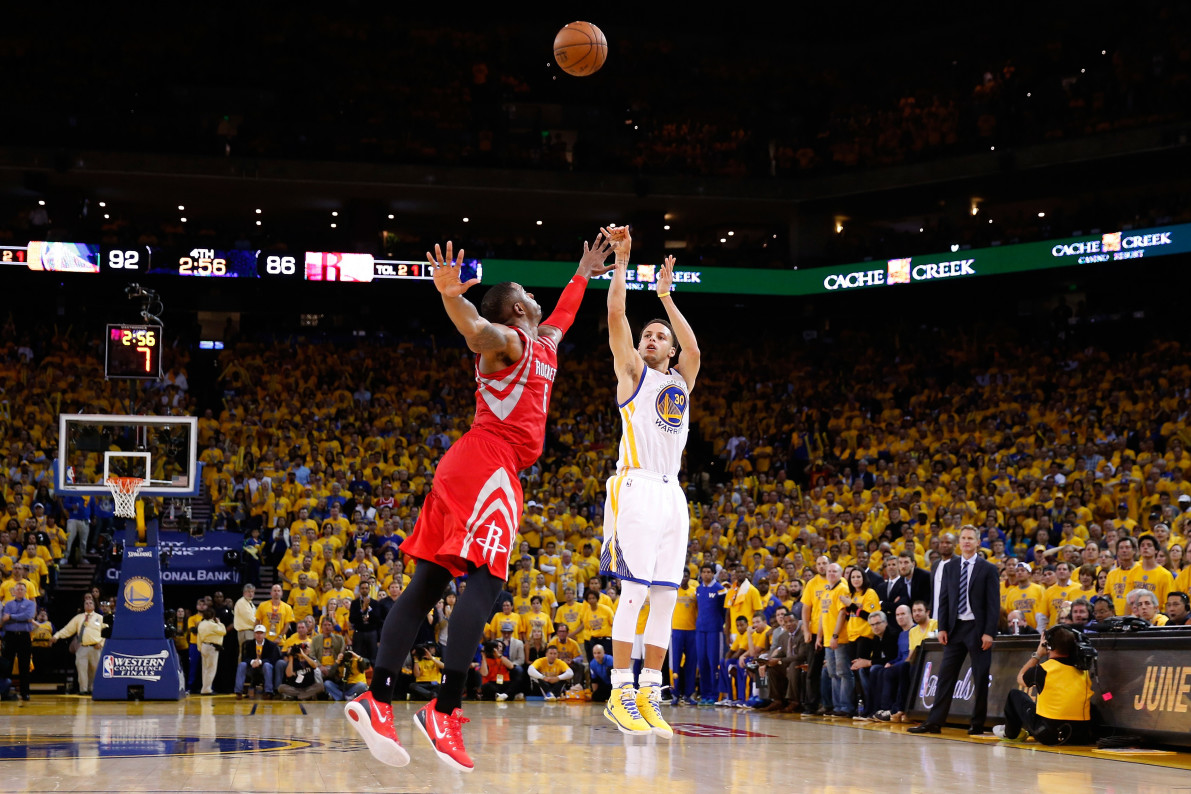 Oh no. They’ve gone and done it. They built a robot Steph Curry and it will not only wreck the entirety of the basketball-playing universe, but if it becomes sentient…

Actually, it’s not really a robot Steph, but rather a contraption called Noahlytics in which a sensor perched 13 feet above the hoop catches 30 data points per second to track a jump shot’s location, angle, trajectory, and even where it crosses the rim. A black box-housed robotic voice then barks out the immediate results, so you can tell if you are firing away at an ideal, Curry-esque 45 degree angle. (Technically speaking, Curry’s heaves clock in at 46 degrees. Or at least he did in 2014 when he was put through Noahlytics’ paces.)

You see, given that the hoop is twice the diameter of the ball, the odds of swishing a shot through the net increase at 45 degrees. As the angle decreases, the odds of catching iron are upped, and anything over the magic 45 requires requires increased effort and thus decreases accuracy.

Bloomberg’s Ira Boudway trekked down to a gym at the University of Virginia to meet with John Carter, the CEO of Noah Basketball, and see how his game measured up. After about 100 shots, the verdict came in.

“The Noah tracker has an uncannily complete picture of my tendencies and deficiencies,” Boudway writes. “For a regular Joe, he says, my shot is true albeit with a slight drift off to the left. But beyond about 18 feet, flaws in my mechanics begin to reveal themselves in flatter arcs and more misses.”

Sure, a somewhat wealthy hoops head might have the disposable income to purchase Noahlytics for his or herself, but Carter’s pitching his device to the pros, the quasi-pros of the NCAA, and high schools, the latter of which can pick it up at the low, low price of $4,800 plus an additional hundred bucks per month in data fees. For a more modest price, pickup ballers might look to the “smart” basketball offered for sale by 94Fifty that tracks a jumper’s angle, release speed, and rotation, and sends the results to a nifty phone app.

But the need for this kind of tech is clear. “Only 1 out of 11 high school players are shooting the right arc and depth,” Carter said. “At the college level, that number climbs to about 50 percent. At the NBA level, it’s probably 85 percent.”

The Miami Heat gave venture capitalist and ex-materials science professor Alan Marty $20,000 to build a prototype way back in 2004, and if you were fretting about Curry’s off night in game three of the 2016 Finals, luckily, the Golden State Warriors already count themselves as a client. Additionally, the Utah Jazz, Dallas Mavericks, Miami Heat, Minnesota Lynx, and two college teams, the University of Virginia and The Citadel, are giving it a trial run.

“If somebody is not hitting shots,” Kirk Lacob, the Warriors’ assistant general manager, said, “you can get a workout in using Noah and try to figure out: Are they just having a bad week or is there something technically wrong with the shot?”

But no, we don’t have to worry about an army of perfect-shooting robots becoming our basketball overlords. Not until Noah Basketball perfects the invention they’ve got housed in their tractor shed-slash-mad scientist’s lair in Alabama, “a machine that shoots a basketball with any arc he chooses.” Then, yes. We’re all doomed.