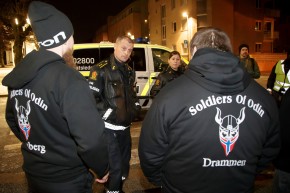 The Soldiers of Odin held a "patrol" at a Denver-area mosque, escalating their intimidation tactics against Muslims 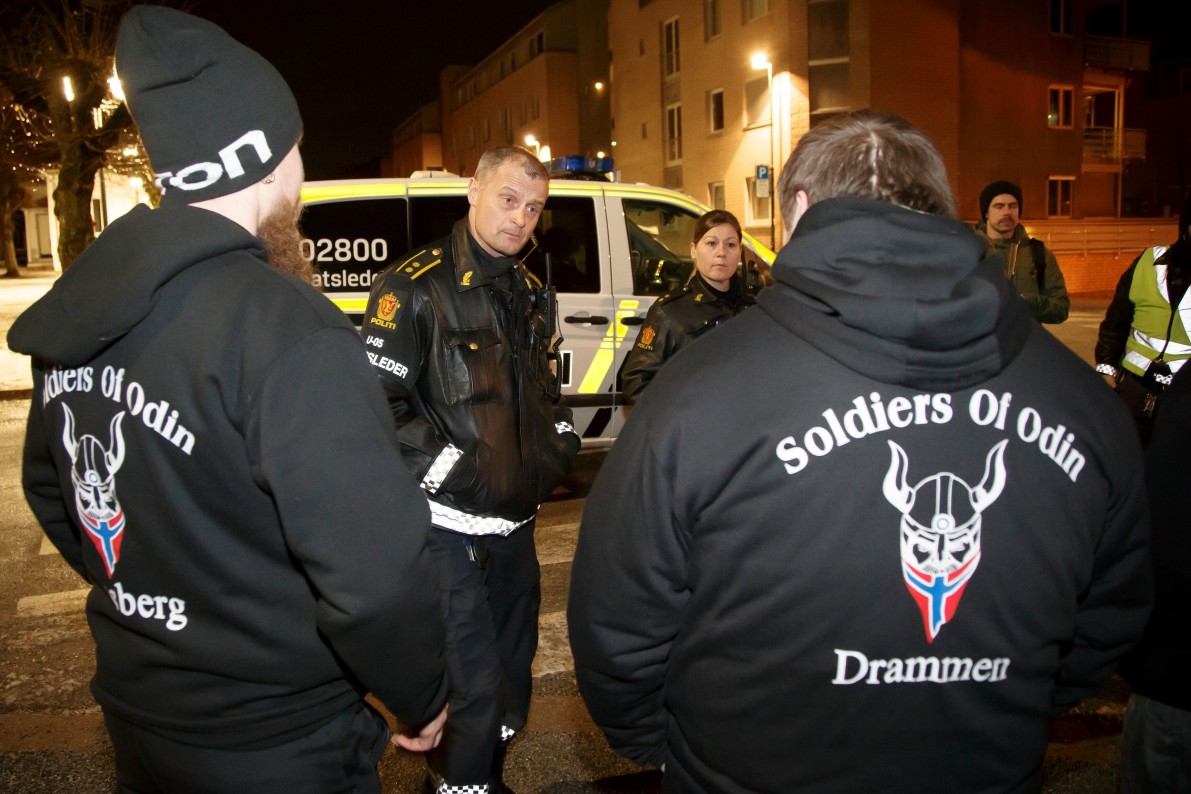 An anti-Muslim vigilante group with roots in Europe is now targeting mosques in the United States with “patrols” meant to curb Islamic extremism and radicalism. Despite the group’s desire to project an image of peaceful crime fighters, however, critics warn against their rise and influence as they prey on Americans who are fearful of refugees and terrorists.

The Soldiers of Odin (SOO) deployed five members of its group to a mosque in the Denver suburb of Northglenn last Saturday to support the “right to free speech” of a lone protester who frequently demonstrates in front of the building. The protester claimed the mosque was full of Islamic extremists, so the group went on a “fact-finding/recon mission,” as they call it. Four members entered the mosque and questioned the imam, asking about the mosque’s stance on Sharia Law and whether the congregation collaborates with radical jihadi groups. One person stood guard outside.

After spending time with the imam, they found no signs of extremism. “I doubt the person protesting outside had ever been inside the Mosque,” they told Vocativ.

The meeting was cordial and polite according to the imam, who asked Vocativ not to identify him or the mosque for safety concerns.

“These guys—biker-looking guys—were standing out on the sidewalk and we decided to invite them in to break the ice,” the imam said.  “They huddled up a little bit to see if they wanted to come in or not. They came in, they were very nice. They took off their shoes when they came in and we sat in a circle and talked.” He said they asked questions about Islam, had some water, and left.

The Soldiers of Odin originated in European cities last year in response to a wave of Muslim asylum-seekers coming through the EU’s porous borders. Members dress in black for their refugee “patrols,” which they claim are intended to prevent the rape and murder of white women. Critics, however, aren’t buying it—they believe the SOO’s tactics are purely designed to intimidate Muslims.

As Vocativ reported last month, the internet has enabled the Soldiers’ expansion into the United States; SOO membership has grown significantly since the movement landed on U.S. soil in February, having established chapters in 42 states. The SOO has since been monitored closely by civil rights advocacy groups like the Anti-Defamation League, which considers it to be a “hate group” due to its stance on the dangers of immigrants and Muslims, and the racist language and imagery used by many of its members on social media websites.

Saturday’s meeting was hailed as a success by the group. “There was no hostility at all,” according to an official SOO account of the mosque visit sent to Vocativ via email on Wednesday. “It was a peaceful visit and Q&A session…SOO even complied with the Mosques request for the patrol to take off it’s shoes.”

But on Facebook, where the group conducts most of its recruiting and communication to its more than 4,000 members, their message took on a different tone.

“We achieved our objective,” one of the group’s members, Hal Eugene Halvorson, posted on Facebook along with a description of his version of what happened. “We let them know we are here in Colorado, our eyes and ears are on them, and that we will not tolerate Radicalism and/or Sharia law anywhere in Colorado.”

It wasn’t until the imam saw Halvorson’s Facebook post about the encounter that he realized the group posed a potential threat. He said he called the Northglenn Police Department several times but never received a response. (The police department did not respond to Vocativ’s request to confirm the imam’s claim.)

Still, the vigilantes insist they are a peaceful group with a “multitude of different religious, races and financial backgrounds,” according to one of its commanders who spoke to Vocativ in May.

Their critics, however, see things differently. Several of SOO’s U.S. members are also part of other racist groups like the Ku Klux Klan and the National Socialist Movement, which is the country’s premier band of neo-Nazis. One SOO member, Jacob Laskey, was convicted of a federal hate crime in 2006 for an attack on an Oregon synagogue, according to the ADL.

“This vigilante ‘patrol’ from the Soldiers of Odin USA—in which they appear to have targeted a mosque, even entering it and allegedly interrogating an imam there—shows that the group is becoming more aggressive as it organizes itself,” said Mark Pitcavage, a senior research fellow with the ADL’s Center on Extremism. The SOO now has a website, and continues to recruit new members via-social media campaigns. In previous “patrols,” SOO members have just walked the streets. Saturday was one of the first times they have specifically targeted a mosque. And it won’t be the last.

“There are patrols and surveillance on Mosques happening all over the United States currently,” the SOO said. “If members are invited into the Mosques as guests it is at the discretion of the commanding member to authorize or refuse that invitation.”

The SOO claims they want to partner with the mosques to combat extremist Muslims who may want to do harm to Americans.

“SOO hopes to make the peaceful Muslims in America aware that there are people ready to stand with them in the face of Radicalization, while at the same time making radicals who might have already infiltrated the Mosques aware that there are people who are armed and ready to confront them and their criminal ways in a moments notice! SOO will not stand for radical Islam nor Sharia law in the United States of America,” the group said in an email to Vocativ.

Pitcavage worries that despite the toned down public persona the group seeks that their tactics will only escalate further.

“Their ‘patrol’ also confirms a concern that the Anti-Defamation League has had from this hateful group’s inception—that, with a lack of easily identifiable ‘refugees’ to target, the Soldiers of Odin USA would instead turn to targeting Muslims in general,” he said, adding that the mosque in Colorado and its congregation “are hardly likely to be the only Muslims in the U.S. targeted by this new hate group.”